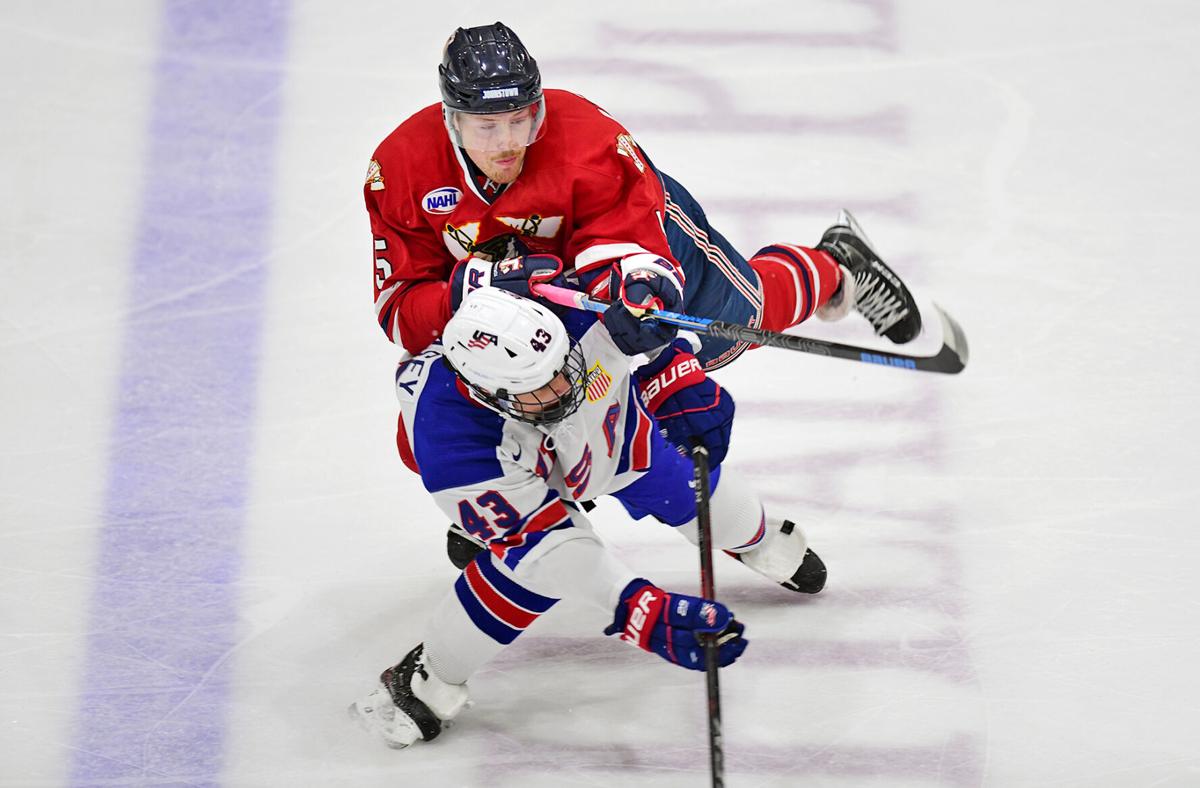 So, the Johnstown Tomahawks have to wait two more days to open the North American Hockey League season.

Like most teams playing in mid-March, the then-surging Tomahawks initially had to “pause” play and eventually the players headed to their respective hometowns after the league canceled the remainder of the regular schedule due to the COVID-19 pandemic.

“Any time you are starting a new season the excitement is very high, but this year is as different as it gets given the way 2019-20 was shut down and the wait we have had while building up anticipation,” Tomahawks coach Mike Letizia said.

“Everything right now is so unpredictable in our world, and one thing we have always tried to do is take one day at a time,” the veteran coach added. “I think more than ever that will be extremely important for our approach as we begin 2020-21.”

Just about seven months since the NAHL stoppage, Letizia’s team is headed to Abingdon, Maryland to face the Maryland Black Bears on Sunday (7 p.m.) and Monday (11:30 a.m.) at the Ice World.

Originally, the games were to be played on Friday and Saturday at the Black Bears home arena, Piney Orchard. But the rink is in Anne Arundel County, which was not in Phase 3 of Maryland’s Recovery Plan when the NAHL team announced the game site and date change.

Now, the ninth season of Tomahawks hockey will enter its own Phase 1 – following what Letizia has developed into a winning formula during back-to-back impressive seasons.

Six players return in forwards Andrew Murphy, Reed Stark and Carson Grainer, and defensemen Ryan Poorman, Liam Whitehouse and Ethan Webb. The ’Hawks brought in third-year veteran Anthony Mastromonica, who spent the past two seasons with the Wilkes-Barre/Scranton Knights after beginning his NAHL career in Johnstown.

“I think when you have such a large turnover going into a season like we have, it is important to have some guys with experience to lean on,” Letizia said. “We have two guys, Murphy and Webb, who were a part of the team that went to the Robertson Cup (in 2018-19) so they have the taste of what that takes.

“Then any type of experience is an added bonus, but when we have a season like no other about to start, I think wisdom and the understanding of how to navigate this appropriately will be vital to our team.”

Last season, the Tomahawks (34-13-2) had 72 points at the time of the pandemic-related stoppage. Johnstown had won eight straight games.

Many familiar faces will be missing from that Tomahawks team, including NAHL Most Valuable Player Christian Gorscak, captain Chris Trouba and standout goaltenders David Tomeo and Alex Tracy, who signed with Sioux City and will begin the season in the USHL.

In fact, the top nine scorers from last season have moved on.

“As training camp developed we started to really see some different things,” said Letizia, whose team split a pair of exhibition games against USA Hockey National Team Developmental (17-U).

“We’ve made improvements each week. With only really six guys back, it’s generally a new team.”

Three players the Tomahawks selected in the NAHL Supplemental Draft in May are on the roster: forwards Max Neill, captain Alex Gritz and Matt McQuade.

Four players taken in the NAHL Entry Draft in July are on the team: forwards Dom Schimizzi and Jared Gerger, and defensemen Nathan Cox and Aiden Ehresman.

“Our young guys really showed up well in the exhibition games,” Letizia said. “They rose to the challenges. I think it gives us a good balance in terms of older and younger. Those kids are going to have their ups and downs as first-year guys. They’re talented and they love to work. They’re eager to be Tomahawks.”

Just as he has for seven months, Letizia is willing to wait and see how his prospects and veterans develop together during a season “like no other.”