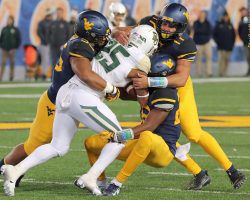 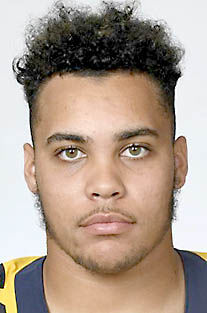 His former Trojans teammate Bryce Gibson also had a big moment in his third season as a starter at defensive back for Youngstown State University this weekend.

Not so long ago, Loe and Gibson were part of a 12-2 team that earned the 2016 District 6 Class AAAA crown and won a state playoff game against Jersey Shore.

Now, they’re competing at a high level with NCAA Division I programs.

A redshirt sophomore, Loe was part of a big play in the third quarter of the Mountaineers’ 44-27 victory over North Carolina State in a game that was tied 21-all at halftime in Morgantown.

Junior fullback Logan Thomas blocked a North Carolina State punt and Loe pounced on the ball deep in Wolfpack territory. Video of the play made its rounds on Twitter on Saturday.

Similarly, Gibson had a significant role in Youngstown State’s 34-14 victory over visiting Duquesne on Saturday.

Gibson, who has played in all 25 games since joining the Penguins, had an interception, two solo tackles and broke up a pass in the win over Duquesne.

This season the former Trojans standout has six solo stops, eight tackles and a fumble recovery to go with his pick for 3-0 Youngstown State.

Roaring back: This might not truly qualify as a comeback win, but undefeated Ligonier Valley trailed 6-3 at Saltsburg early on Friday night.

The Rams scored the next 54 points and won 57-12, for Ligonier Valley’s 32nd consecutive Heritage Conference victory.

Kyrie Miller rushed for 184 yards on 17 carries, an average of 10.8 yards, and scored five touchdowns.

Ligonier Valley showed no signs of rustiness after being forced to take off a week when an undermanned United team forfeited a scheduled Week 3 game.

“We’re looking forward to finally playing at home next week,” Myers said. “It will be nice to play at home.”

Winless Forest Hills opened with games at Chestnut Ridge and Bedford, then played Richland at Windber Stadium in Week 3, and traveled to Somerset on Friday.

A new concession stand and reconfigured seating were part of the project, as well as upgraded lighting and sound systems.

Most years, when you do a season preview, you focus on the players. At West Virginia this year, the focus changes. For first time since 2011, Dana Holgorsen is not running the team.