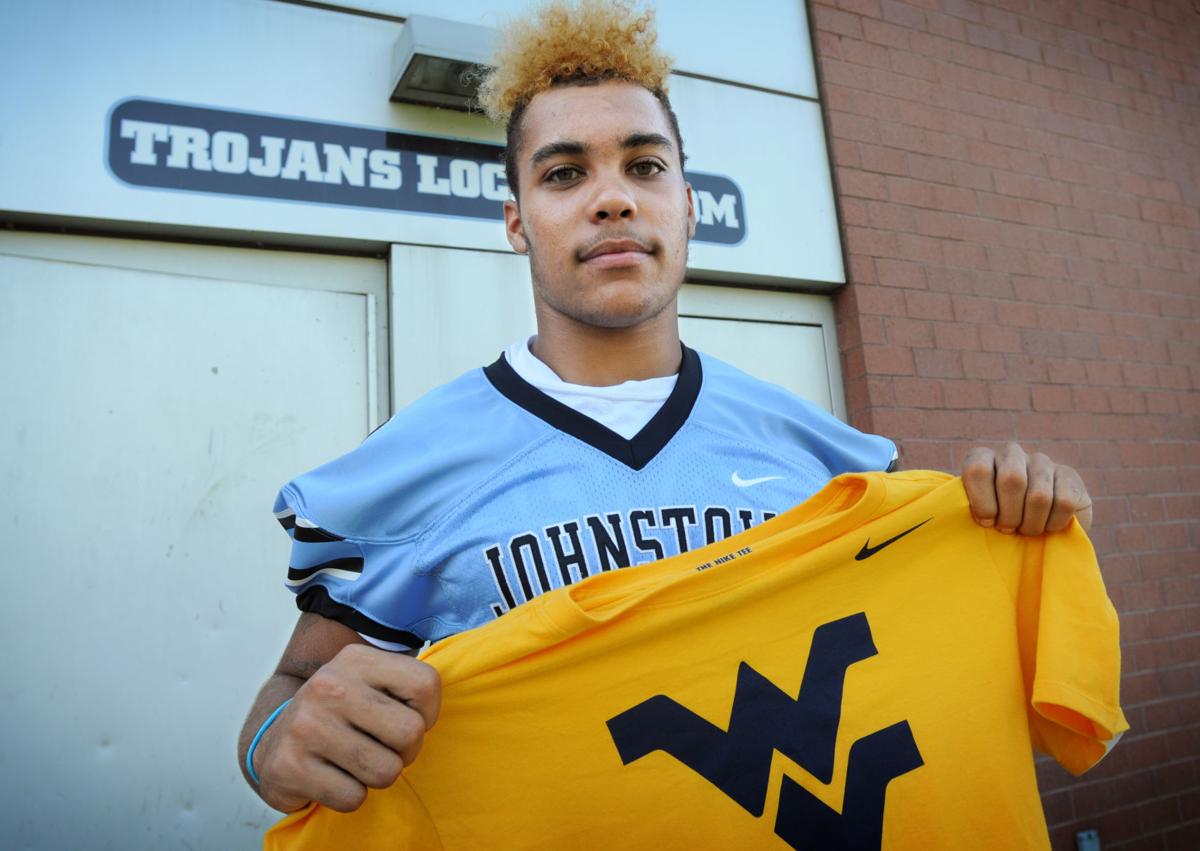 Greater Johnstown's Exree Loe holds a West Virginia t-shirt after announcing his commitment to play football for the Mountaineers prior to the start of the Trojans' game against Penn Cambria on Friday, August 26, 2016.

Greater Johnstown's Exree Loe holds a West Virginia t-shirt after announcing his commitment to play football for the Mountaineers prior to the start of the Trojans' game against Penn Cambria on Friday, August 26, 2016.

Since he stepped onto the campus at West Virginia University two years ago, Johnstown’s Exree Loe has learned to adapt.

Loe willingly and eagerly accepted any role he was asked to fill.

As a redshirt in 2017, he still managed to make his mark on the scout team.

A move from defensive back to linebacker as a redshirt freshman came last season.

Now, under new head coach Neal Brown and new defensive coordinator Vic Koenning, Loe is among a group of players hoping to make an impact at the weakside (”Will”) linebacker position for the Mountaineers.

“Everything is going well. I play the ‘Will’ now,” said Loe, a 6-foot, 210-pounder known for putting in ample work in the weight room, on the field and in the classroom. “We just finished up fall camp. We’ll see what happens.

“The more time I’ve been here, the better things got. My roles are starting to become bigger within the team.”

Last season, Loe appeared in 11 games and was part of 210 plays, including 160 plays on special teams.

He had eight tackles, with five solo stops, a sack, three tackles for loss of yardage, a forced fumble and two fumble recoveries.

The former Trojans standout said a move from strongside to weakside linebacker has gone well. A year ago, Loe made news after bulking up to compete at linebacker after the move from defensive back.

“It’s just different from coming in and covering things to being in the box with linemen the whole time,” said Loe, a sports management major who received Big-12 academic honor roll status. “It’s a big adjustment but it’s something I was willing to take on.

“I just want to see my team succeed.”

The Mountaineers went 8-4 in 2018, losing to Syracuse 34-18 in the Camping World Bowl. Veteran coach Dana Holgorsen left to coach the University of Houston after the season.

Four other Greater Johnstown graduates are competing in NCAA Division I programs.

• Bryce Gibson is a junior defensive back who started 11 games during both his sophomore and freshman seasons at Youngstown State University. Gibson had 42 tackles last season, 31 solo stops, and led the team with 12 pass breakups.

In 2017, Gibson was a Missouri Valley Conference All-Newcomer selection after making 35 tackles, 24 solos, at cornerback. He was part of a 12-win team and earned all-state honors at Johnstown in 2016.

• Shamar Jones will be a redshirt freshman at Indiana University. The 6-1, 278-pound defensive lineman appeared in one game against Ball State University last season before being tabbed a redshirt. At Johnstown, Jones made 244 career tackles and was an all-state selection who played in the Blue-Grey All American Bowl in Dallas.

• Kareem Gibson is a redshirt senior at the University of Albany, where he played 11 games at cornerback last season with eight starts. Kareem Gibson had 42 tackles, 29 solo stops, one interception and eight pass breakups in 2018.

Ferndale’s Trey McGough had just experienced a hectic stretch of adrenaline rushes on the mound, in the clubhouse and in the air.