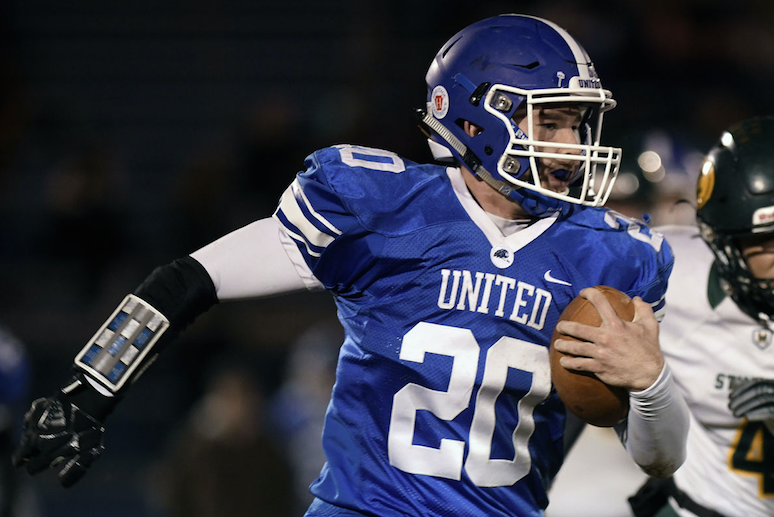 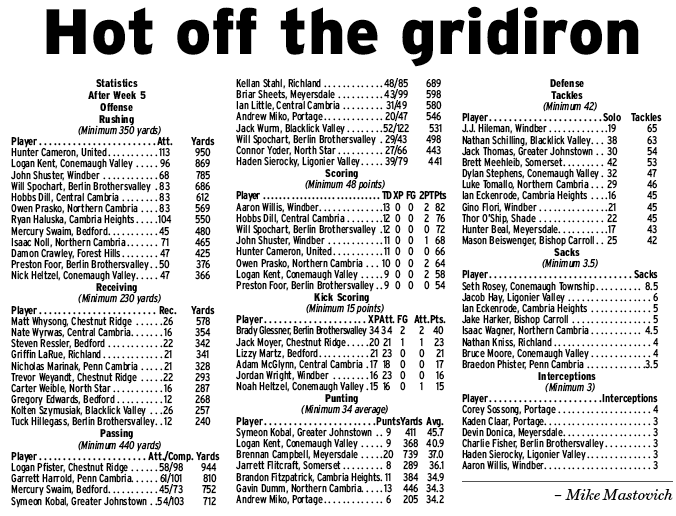 Veteran United High School coach Kevin Marabito has seen his senior back Hunter Cameron produce some amazing performances over the past four seasons.

But even Marabito was taken aback by Cameron’s incredible effort in a 48-34 loss at West Shamokin on Friday. Cameron collected what might be considered several weeks worth of rushing yards in one game.

“He was possessed on Friday night,” Marabito said of Cameron’s 415 rushing yards and three TDs on 35 carries against the Wolves. “He was a punishing runner. His vision was unreal. He was a spectacular runner. I ended up just watching him run. He was making cuts and just running over people. His first comment to me after the game was, ‘The offensive line blocked well for me.’ ”

Cameron moved atop the area rushing leaders with 950 yards on 113 carries this season, an average of 8.4 per carry and 190 a game for the Lions, whose 1-4 record includes a couple of close setbacks. The 5-foot-11, 210-pound playmaker also has 11 touchdowns and 66 points.

“He just keeps getting better each week. He had 200 yards the week before he got 415,” Marabito said. “He’s doing everything possible. It’s a shame we can’t get wins for him. He’s given everything he has. It’s just a pleasure watching him.”

Cameron is United’s career leading rusher with 4,342 yards and counting. He set the school’s single-season mark with 2,186 rushing yards as a sophomore, when United advanced to the District 6 Class A title game in a 9-5 season.

Cameron previously set the Lions’ single-game rushing mark with 350 yards and four touchdowns in a 36-14 win over Conemaugh Township in 2018, but broke his own record on Friday.

The Lions will host undefeated Marion Center (4-0) in Week 6.

Just for kicks: Berlin Brothersvalley senior placekicker Brady Glessner has made all 34 of his extra-point attempts and went 2-for-2 on field goals in a big WestPAC victory at Windber Stadium last week.

Glessner, who made field goals from 27 and 26 yards, has an area-best 40 kicking points for the 5-0 Mountaineers.

LHAC catches: The Laurel Highlands Athletic Conference had seven of the area’s top eight receivers based on statistics reported this week.

Huddle Up! | Experience sets the tone for area coaches

When it comes to the longest tenured head coaches on the high school gridiron sidelines, the area has four men who have been around to see numerous changes over the years.