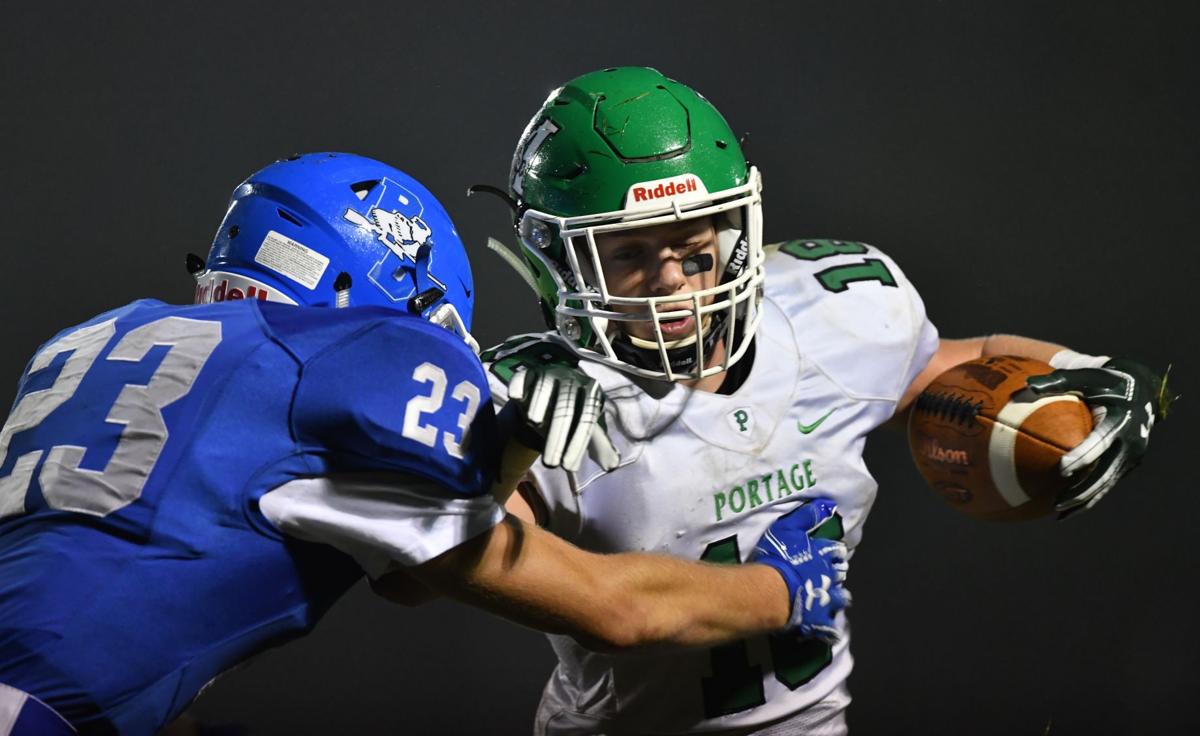 Portage running back Gabe Forst, right, looks to get by Berlin linebacker Aspen Hay during a PIAA WestPAC in Berlin, PA., Friday, Sept.13, 2019.

Portage running back Gabe Forst, right, looks to get by Berlin linebacker Aspen Hay during a PIAA WestPAC in Berlin, PA., Friday, Sept.13, 2019.

Portage’s thrilling 16-7 victory over Meyersdale on Friday night put the Mustangs in a three-way tie at the top of the WestPAC standings, joining the Red Raiders and Berlin Brothersvalley with identical 7-1 marks.

In Week 9, the Mustangs are slated to go to Conemaugh Valley, which forfeited last week’s contest against the Mountaineers, on Saturday. Meanwhile, the Red Raiders are set to host North Star and Berlin is at Blacklick Valley on Friday night.

Should all three teams win, they will all be crowned tri-champions. WestPAC criteria for the tie in placement of the teams for Week 10 against the Heritage Conference is first based on points given up to the other two teams. Berlin has surrendered 41 points and will be third. Head-to head is the next criterion with Portage taking the top spot and heading to the Appalachian Bowl luncheon on Oct. 23 while Meyersdale will be No. 2.

Ligonier Valley (8-0) has clinched its fourth straight Heritage Conference crown last Friday and will face the Mustangs in the Appalachian Bowl set for Oct. 26 at Penns Manor.

In the current standings, Meyersdale would be headed to either Marion Center (6-2) or Saltsburg (6-2), while Berlin gets the team that the Red Raiders don’t face.

On the court: For the second straight season, Bedford’s Emily Ruhlman squared off against Bisons’ sophomore teammate Josie Shuke with the District 5 Class AA singles title on the line.

Ruhlman, a senior, prevailed again to retain her title with a 6-2, 6-1 victory over Shuke in the championship.

Also in District 5, the Somerset girls repeated as the Class AA team champions over Bedford and will face the District 3 runner-up on Oct. 22 at a site and time to be determined. The District 5 doubles tournament is scheduled for 9 a.m. Monday at Somerset High School.

In District 6, the AA team championships are set for this week. Westmont Hilltop sophomore Alyssa Kush is the Class AA singles champion while Olivia and Emma Ratchford of Central Cambria captured the Class AA doubles crown.

The PIAA singles and doubles championships are slated for Nov. 1-2 at the Hershey Racquet Club.

Running for individual titles: The Central Cambria boys and girls have both clinched the team titles in the Laurel Highlands Athletic Conference with matching 11-0 marks.

On Wednesday, the Red Devils play host to the conference meet that will determine the top individual runners in the league.

Westmont Hilltop senior Nick Fetzer is the defending champion while Paige Wess, who has graduated and now runs for Indiana (Pa.), was the girls winner in 2018.

It is not even October yet and autumn is just about to begin, but it is already the halfway point of the high school football season.