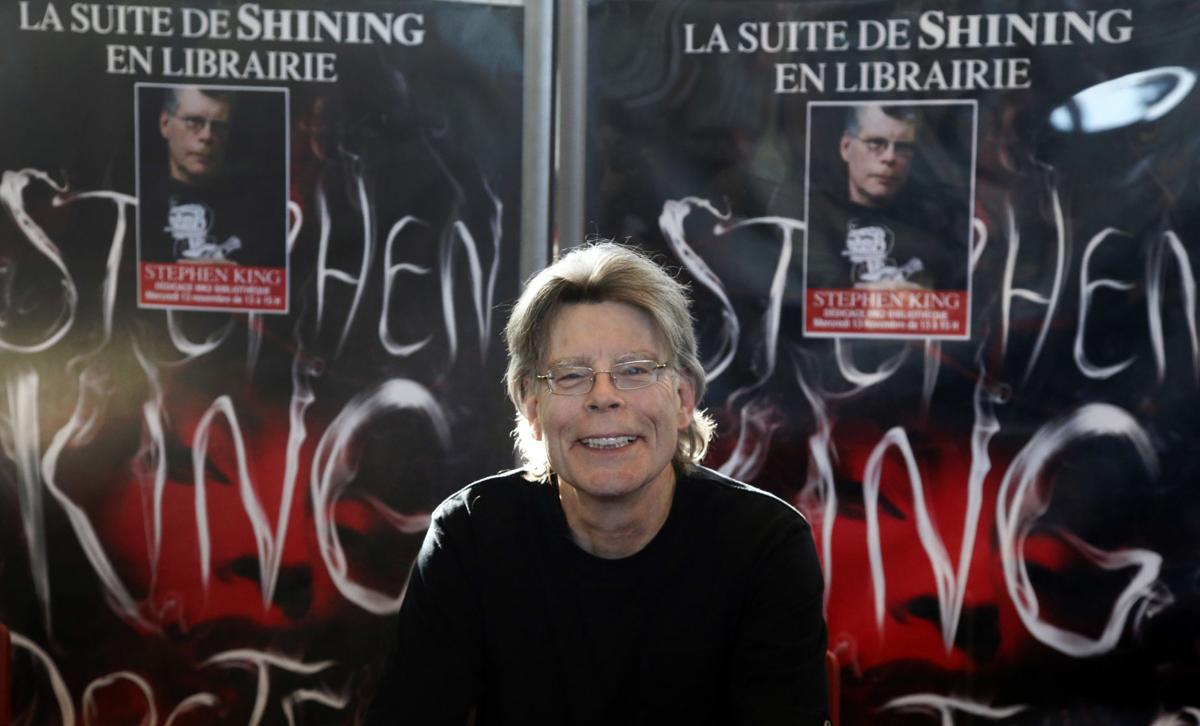 Author Stephen King poses for the cameras, during a promotional tour for his novel, 'Doctor Sleep', a sequel to 'The Shining', at a library in Paris, Wednesday, Nov. 13, 2013. (AP Photo/Francois Mori)

Author Stephen King poses for the cameras, during a promotional tour for his novel, 'Doctor Sleep', a sequel to 'The Shining', at a library in Paris, Wednesday, Nov. 13, 2013. (AP Photo/Francois Mori)

As an early teen in a household impacted by divorce, I picked up a new book in 1977 and my life was changed forever.

Stephen King’s shocking tale “The Shining” was a bestselling novel before it became a hit movie starring Jack Nicholson, and then a TV mini-series. The book spawned a sequel 36 years later – “Doctor Sleep” – and a movie based on that second book will land in theaters next month, with actor Ewan McGregor portraying the boy from “The Shining” now grown up and again facing supernatural forces.

After 350 million books sold and 43 films inspired by his written works, King is widely regarded as a storytelling master who takes everyday items – the toaster, the family cat, your cellphone – and turns them into tools of carnage and terror.

But it’s his ability to take common human experiences and make them relatable that sets the great author apart, and has made him an inspiration to generations of writers who strive to generate genuine emotion through a retelling of the adventures and ordeals of folks they encounter.

In “The Shining,” King kept readers awake at night with his depiction of a grand and haunted hotel – the Overlook – where the dead come back to life and party like it’s the Roaring Twenties while adding new members to their ranks.

If you’ve forgotten the story, dig up Nicholson’s portrayal of hotel caretaker Jack Torrance – who is fired from his position teaching at a New England prep school and takes a winter job at the mountain resort, but succumbs to the Overlook’s dark spirits and is convinced that he should murder his wife and young son.

Beyond a ghost story, “The Shining” is about human weakness and the issues that truly haunt many families.

I’ve read “The Shining” at least four times, including a repeat journey with the Torrances that wrapped up this past week. Each time, the experience and my emotional response evolved with my advancing age and expanding life experiences.

When I encountered “The Shining” that first time, my parents had recently split and I was wrestling with the same emotions that kids in that situation tend to experience – sadness, guilt, isolation, embarrassment.

How King’s characters related to one another, and the internal dialogue each had in the face of personal demons, helped me navigate that period and added to my already budding desire to connect words and attempt to portray meaning.

The best writers take you inside a subject and explore that topic through the experiences and interactions of people.

That’s true of nonfiction writers, as well – including journalists.

Reporters are told to start with facts (not opinion) but to add real people’s voices to show the impact – good or bad – of an issue or circumstance.

Melvin Mencher, a professor emeritus at Columbia University, said this “human interest” reporting provides readers with “the drama of the personal encounter.”

Through the reporter’s work, a reader connects emotionally with a story subject, even if they are separated by time and geography.

Human interest reporting is prominent this month as we roll out our traditional breast cancer awareness content – showing that health concern through the experiences of those battling the disease and their families, along with the doctors and advocates working with and supporting them.

Exploring topics with this human interest approach allows reporters to both paint a more complete picture of an issue, and to evoke an emotional response from their readers.

A reader moved by the passion of a local cancer scientist may be prompted to send a check to a fundraiser that benefits the research.

A reader angered at the impact of a government decision on a local neighborhood might be inspired to pen a letter to the editor, or even stand up and speak at a public meeting.

An elected official who is shown an issue in terms of the effect on constituents – beyond the statistics and reports – might have a better perspective on how to seek solutions to a problem.

If the current political climate shows us anything, it’s that we humans are a species of emotions. We respond to what we feel.

And sometimes, what we read helps us understand our place in a complicated and sometimes frightening universe.

King’s young Danny Torrance had “the shining” – an ability to know what his parents and others were thinking and feeling, their fears and weaknesses.

For those of us not blessed with a second, deeper level of consciousness, such encounters with “human interest” happen because a skilled and thoughtful writer understood that voices and experiences can provide a powerful connection with readers – reaching not only their heads, but also their hearts.