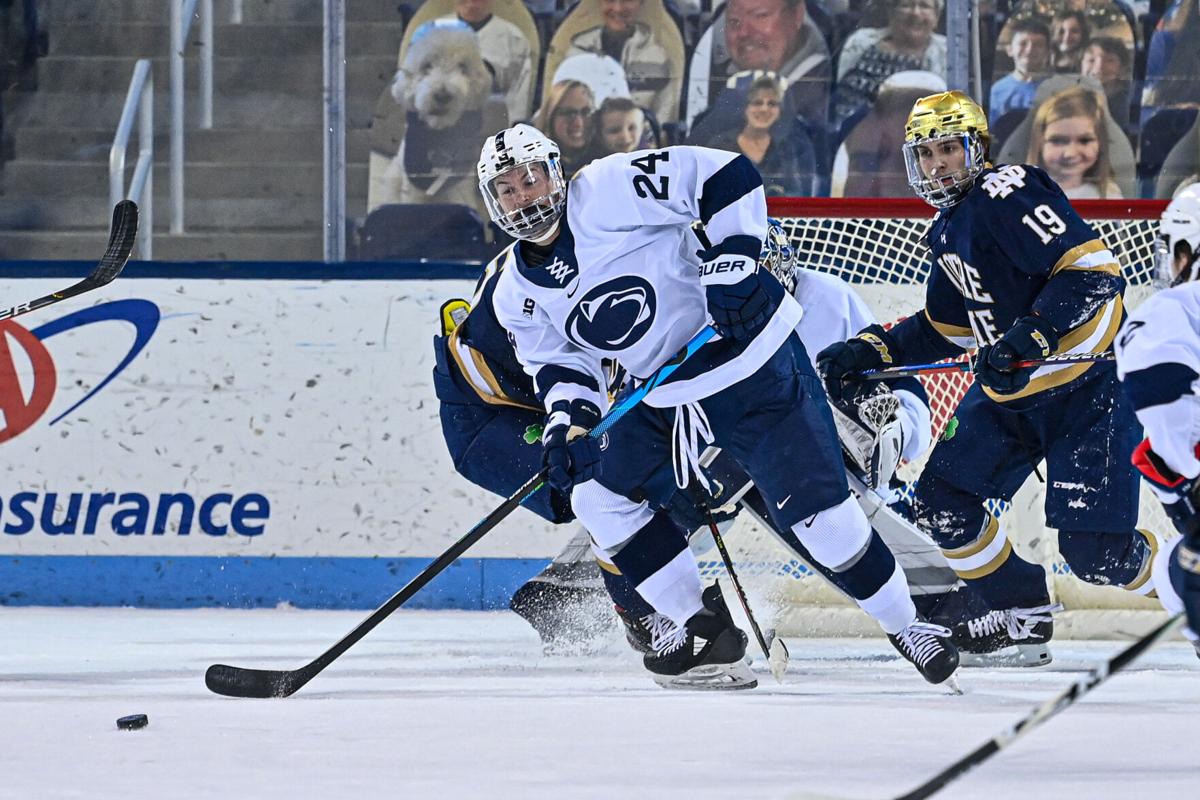 Penn State's Adam Pilewicz (24) during the game with Notre Dame. The Nittany Lions finished off a come-from-behind effort to secure the 2-1 victory over Notre Dame on Thursday night January 28, 2021 in Big Ten Conference action at Pegula Ice Arena. Photo by Mark Selders 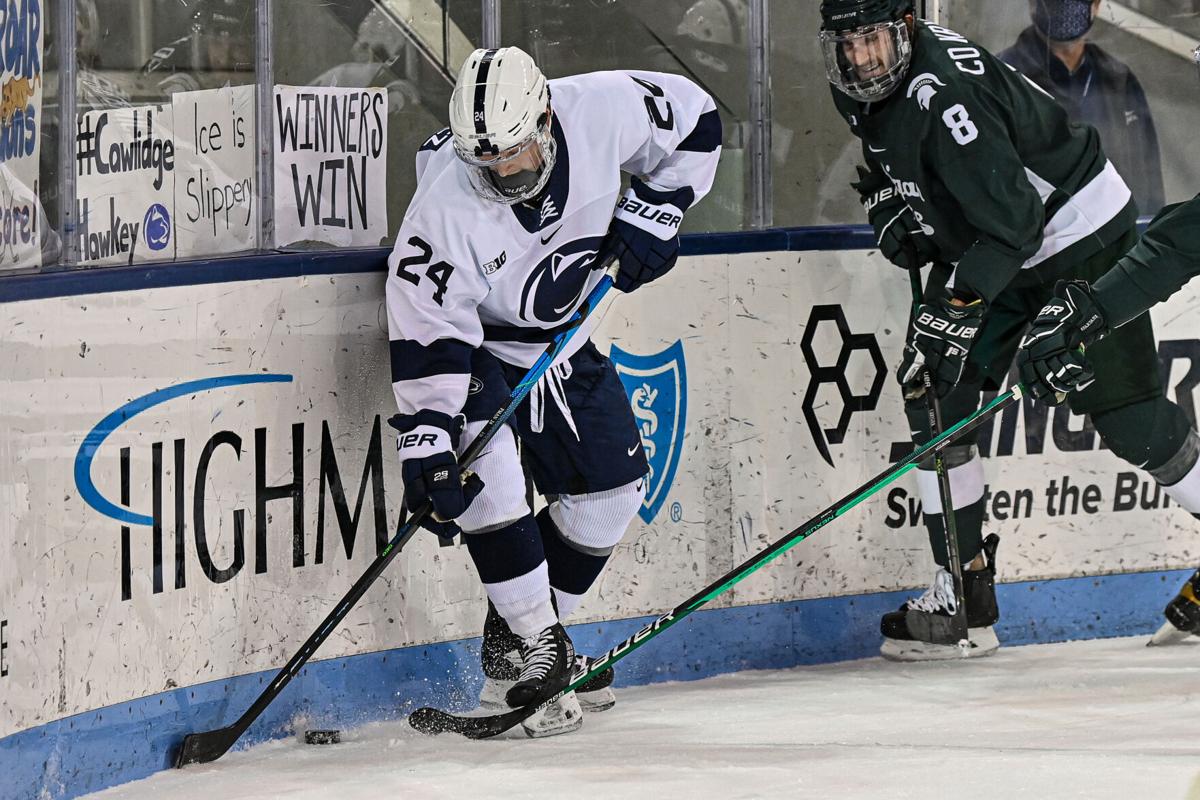 Penn State's Adam Pilewicz (24) during the game with Michigan State. The Nittany Lions picked up a 3-2 overtime win over the visiting Spartans on January 15, 2021 in Pegula Ice Arena. Photo by Mark Selders

Penn State's Adam Pilewicz (24) during the game with Notre Dame. The Nittany Lions finished off a come-from-behind effort to secure the 2-1 victory over Notre Dame on Thursday night January 28, 2021 in Big Ten Conference action at Pegula Ice Arena. Photo by Mark Selders

Penn State's Adam Pilewicz (24) during the game with Michigan State. The Nittany Lions picked up a 3-2 overtime win over the visiting Spartans on January 15, 2021 in Pegula Ice Arena. Photo by Mark Selders

STATE COLLEGE – For Adam Pilewicz, playing hockey anywhere other than Penn State was never an option.

His parents, Maura and Greg Pilewicz, are Penn State alumni and his older brother John played baseball for the Nittany Lions. His sister attends Penn State, as well.

Pilewicz arrived in State College as a freshman ahead of the 2017-18 season after spending two years in Johnstown as a member of the Tomahawks, a junior hockey team affiliated with the North American Hockey League.

While Penn State was always a top destination for the now-senior forward, his time in Johnston was more than just a means to an end.

“I love that city,” Pilewicz said. “The fans were awesome, and I was lucky enough to come in right after they won Hockeyville, so we got the rink upgrades. The cool thing about Juniors was that you were kind of on your own. A lot of your working out and everything you had to do, it was up to you.”

Pilewicz played in 108 games during his Johnstown career and tallied 43 points on nine goals and 34 assists. Before joining the Tomahawks, Pilewicz starred at Quaker Valley High in the Pittsburgh suburb of Sewickley. In 2012, he guided Quaker Valley to a PIHL championship during a season in which he recorded 54 goals and 64 assists.

“Adam played locally in the AAA hockey circuit here in the Pittsburgh area and for his high school team so we had known of him in the years prior and kind of scouted him and communicated with him and had him in for practice and things like that,” Johnstown coach Mike Letizia said. “We knew we were getting a good hockey player, but ultimately, a good person.”

The Tomahawks went 40-16-4 during the 2016-17 season, Pilewicz’s final one in Johnstown. The team that year reached the division semifinal round of the postseason and ended the season ranked fourth in the North American Hockey League.

“(I) just grew as a hockey player there for two years, learning from the people, learning from a coach like Mike Letizia, who I thought was great for my development,” Pilewicz said.

Pilewicz played in two games during his freshman season at Penn State. While he was grateful to be playing college hockey at the school of his dreams, the transition to playing time on the ice was a bit harder to swallow.

“It wasn’t always easy,” he said. "My first year I might have been a little bit more spiteful about not really getting opportunities. "Nothing toward Coach (Guy) Gadowsky or anything, I was just a little upset about it. It’s easy to get down on yourself when you’re not playing so it was a tough transition. But the guys have always been extremely helpful. I think back to some of the seniors and some of the older guys when I was a freshman, and they really took me under their wing.”

Playing time increased during Pilewicz’s second season. He recorded his first collegiate goal against Niagara that season and ended the year with four points on two assists and two goals. He also landed on the Big Ten academic team at season’s end.

This year, Pilewicz and Penn State are off to a 9-8 start. The Nittany picked up their second consecutive win of the year on Thursday against Notre Dame. Pilewicz tallied season-highs in shots (one) and blocks (one) in Penn State’s 5-4 victory.

“He hasn’t been in the lineup for the last two losses, and he has been in the lineup for our last four wins,” Penn State coach Guy Gadowsky said of Pilewicz after the team’s win against Wisconsin on Jan. 22. “I don’t know why, he’s just a great leader. He really is. He does the right things all the time. He puts himself in a position – he’s an engineering major – by being a great student. He’s a great teammate.”

With graduation awaiting Pilewicz at the end of the season, he’s already preparing himself for life off the ice. Last summer, he interned with an engineering firm in Ohio which gave him first-hand experience in the field he plans to pursue after college.

“It was more of a mechanical engineering internship, so a lot of reverse engineering, which I thought was really interesting,” he said. “It was cool to be able to work on something new every day. It kept the job from getting a little boring and tedious at times. I’d like to do something in my field of industrial engineering. I’d like to at least start in engineering whenever I leave college. The greatest thing about engineering is that it can open a lot of doors, and that’s the main reason I chose this.”

Nine games remain on Penn State’s regular-season schedule before the Nittany Lions make their run for the conference and national crowns. No matter how this season ends for Pilewicz, Gadowsky is more than confident that the tools that made him successful in Johnstown and at Penn State will contribute to Pilewicz’s success upon graduation.

“He does extra work in the weight room, he knows his playbook 100%,” Gadowsky said. “He’s the type of person that not only hockey teams want, that every successful company, team, organization wants.”

The Johnstown Tomahawks built on a statistical trend in a 6-2 victory over the Northeast Generals on Friday night at 1st Summit Arena.