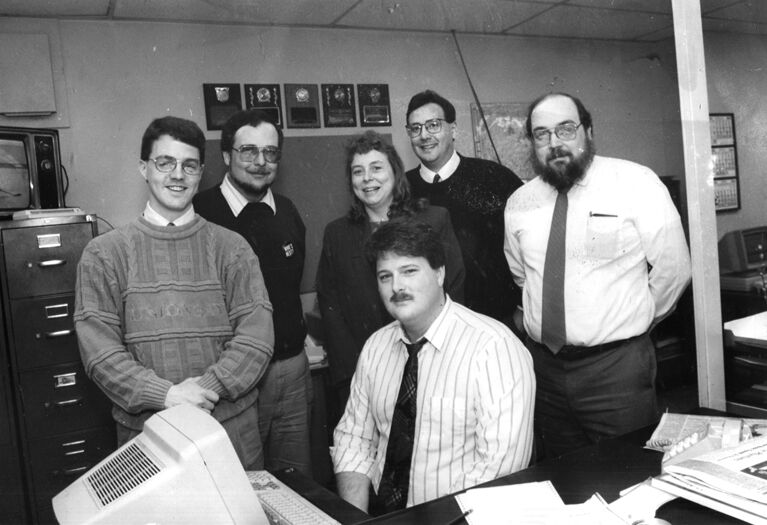 Members of The Tribune-Democrat newsroom are working with heavy hearts after the passing Wednesday evening of sports writer Cory Isenberg, who had battled cancer multiple times over several years.

Cory was a pioneer as a female journalist covering local sports.

She was deeply passionate about area teams and competitors – especially high school programs, regional race tracks and American Legion baseball – and she had a special relationship with those who visited from afar each year for the AAABA Tournament.

That commitment to local sports inspired her to develop The Tribune’s “Spotlight Athlete of the Week” feature, which appears each Monday.

Her colleagues have been offering their thoughts about Cory, some in emails to me and some in social-media posts.

Here’s what they’ve been saying:

• “When I walked into the sports department my first day in 1986, Cory was there to greet the new guy and offer encouragement. We worked together for nearly 35 years – double-covered events, manned the phones on heavy call-in nights and had road trips to Hershey, Shippensburg, Altoona, Punxsutawney and State College and so many other places, near and far. She battled cancer and kicked its butt twice before this. Tough as nails to the end.”

• “High school sports was the very fabric of Cory’s being; not only evident in her writing, but in everyday conversation. She was elated when our local athletes excelled in state playoffs, and dejected when they lost. That, her solid relationships with area coaches, and her willingness to step up and sing the ‘Star-Spangled Banner’ with perfect pitch and timing at countless games when asked, were examples of her genuine emotional connection to the local scholastic sports community.”

• “Cory was a fierce advocate of local sports and showed that women have a prominent place in sports journalism.”

“Even though my only interaction with Cory was in the newsroom, I came to admire her dedication and her passion for three things: Sports – and local high school sports above all; her church and her family. Those three passions, not necessarily in that order, defined Cory Isenberg.”

• “I don’t think you were going to find anyone who was more excited and proud to cover high school sports than Cory Isenberg. She approached what she did for the department with a sense of honor. Cory was the type of journalist who stayed very aware of what was going on locally and brought a passion to her desk each day, because she genuinely cared about the athletes and coaches that she wrote about.

“She was very much her own person. She took an incredible pride in her role within the department, but it didn’t define who she was away from her duties. But she always carried herself as if she was an ambassador for The Tribune-Democrat, strictly because she listened to readers and always wanted to better herself and the department.

“Cory never shied away from fighting for what she felt was best for our coverage but it was never about her name on the top of a story, it was about the names inside the stories. Her passion was local sports and it was never something that she hid.”

• “Cory was certainly a pleasure to work with. In our short time together as co-workers, we formed a strong working relationship. She made the world a better place with her upbeat attitude and personality. We will definitely miss her presence around the newsroom. We plan to keep her legacy alive and build off her ideas she brought to the sports department.”

• “My colleague Cory was a great co-worker and an even greater person. She’ll be missed all over the region she covered for so many years as a sports reporter here.”

• “We lost a champion for young people, but heaven gained a great sports writer. Working alongside Cory Isenberg nearly every night for two decades, I learned a lot about being a journalist, but more than anything, I learned to be passionate about what you do. We butted heads a few times, but only because we had differing ideas about how to give the people of our area the sports coverage it deserves.”

• “I worked with her two different times and was her boss during one of those stints in sports. She was a very hard worker, very hard-nosed. She will be missed. Gone way too soon.”

• “Cory Isenberg was an absolute fixture covering high school sports in the Johnstown region for as long as I can remember. I did not work at The Tribune-Democrat for long, but I learned a lot from her working in the sports department.”

• “I’m glad that I had the pleasure to know and work with Cory. I’m a better person for it.”

Sam, we’re all better people for the time we spent with Cory.

Her love of the Johnstown region and especially its sports scene was evident when I first met her nearly 30 years ago, and never wavered.