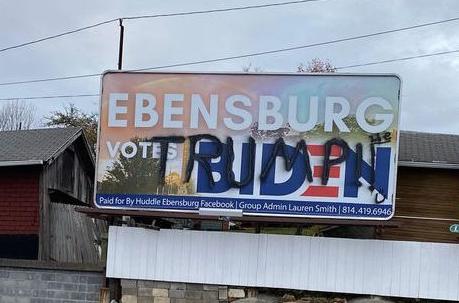 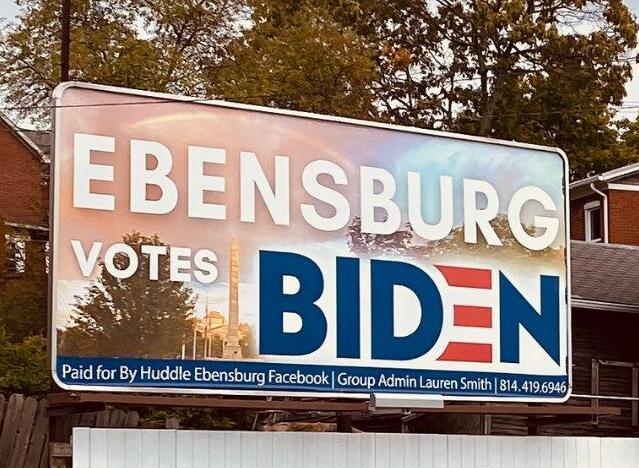 The group Huddle Ebensburg shared this image of its Joe Biden billboard at West High Street and Route 422 in Ebensburg before a message was spray-painted on it overnight into Monday, Oct. 26, 2020.

The group Huddle Ebensburg shared this image of its Joe Biden billboard at West High Street and Route 422 in Ebensburg before a message was spray-painted on it overnight into Monday, Oct. 26, 2020.

EBENSBURG – A billboard with the message “Ebensburg votes Biden” was vandalized overnight into Monday, according to Ebensburg police and members of the local group that paid for the display.

The billboard, located at the intersection of Route 422 and West High Street, was purchased by the group Huddle Ebensburg.

The message “TRUMP!!” was spray-painted in black letters across the name of the Democratic candidate for president, former Vice President Joe Biden, who is challenging Republican President Donald Trump in the Nov. 3 election. Trump spoke at a campaign rally Monday afternoon in Martinsburg, Blair County.

Chief Terry Wyland confirmed that his department is actively investigating the incident, including following up on an anonymous tip and looking for surveillance cameras that might have captured footage of the vandals.

Illig said the group reacted to having yard signs repeatedly stolen by raising money through crowd-funding and purchasing two pro-Biden billboards that went up in early October. Since then, Illig said, members of the group have been the targets of “threats and harassment.”

Wyland said Ebensburg police have gotten 10 to 15 reports recently of stolen yard signs, both pro-Biden and pro-Trump, and are aware that heated discussions have taken place on Facebook over the pro-Biden billboards.

Huddle Ebensburg’s Facebook page describes the group as “an inclusive grassroots group of Ebensburg-area citizens from a variety of backgrounds and political parties” that is designed “to bring the hundreds – if not thousands – of previously silent local Biden supporters to the forefront” and “to bring back decency to Ebensburg.”

President Donald Trump's rally Monday at Altoona-Blair County Airport in Martinsburg was his third stop in the region in two months.