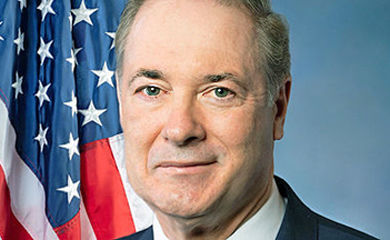 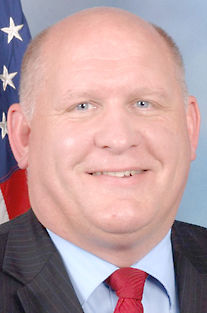 As the dean of the state’s GOP members, he provided insight about the day-to-day business of being in the U.S. House of Representatives and a perspective on the magnitude of the position.

“He has truly been a mentor to me, not just since swearing in, but prior to swearing in,” said Joyce, a Blair County resident from the 13th Congressional District that includes Johnstown. “He would set up, on a weekly basis, conference calls where, early in the morning, he would make himself available, from 7 o’clock to 8 o’clock, to talk about the important role that I was assuming. From step one, from day one, he’s been there.”

Thompson, from Centre County, who represents the 15th Congressional District, which includes part of Cambria County, thinks he and Joyce have worked well together to represent local voters over the past four months.

“I think it can be a very positive thing, especially when you’ve got two people that have such a good strong working relationship, like John and I do,” Thompson said. “You now have two voices, two votes, twice the committees, and (two) times the subcommittee representation.”

Both congressmen visited the city on Wednesday, including taking a joint tour of Johnstown Wire Technologies. They also sat down for interviews – Joyce at the Sheetz on Broad Street, Thompson at Laurel Avenue Community Garden in the West End – during which they expressed similar opinions on several important issues.

Joyce recently visited the Mexico-United States border where he saw about three dozen undocumented immigrants crossing and a display of drugs that had been confiscated.

“This trip was both eye-opening and defining for me,” Joyce said. “It showed me that what is occurring on our southern border is truly a national emergency.”

He met with members of the Drug Enforcement Administration and U.S. Customs and Border Protection, who he said are “stretched thin.”

He has called for a “multi-pronged approach” in which “building the wall is the first and most important thing.”

Thompson concurred about the role a wall could play.

“We need to move ahead with building a physical barrier, a fence at the border,” Thompson said. “First of all, the experts, the people that work at the border, the people responsible for border security they’ll tell you that walls work. We have data to show that in places where we’ve put appropriate barriers, walls in place, illegal immigration has been reduced by 90 percent. I think we’re seeing a reduction in human trafficking, seeing a reduction in the flow of drugs across the border. The more of that construction that we can do the better.”

in which Republican Donald Trump defeated Democrat Hillary Clinton, by social media activity and the releasing of information from

Thompson feels that covert attempt to influence an election in the United States should be a concern for citizens and elected officials, regardless of political affiliations.

“The Mueller report should unify us,” Thompson said.

According to the report, even though “the investigation established that the Russian government perceived it would benefit from a Trump presidency and worked to secure that outcome, and that the Campaign expected it would benefit electorally from information stolen and released through Russian efforts, the investigation did not establish that members of the Trump Campaign conspired or coordinated with the Russian government in its election interference activities.”

But, concerning the issue of obstruction of justice, “this report does not conclude that the President committed a crime, it also does not exonerate him.”

Regarding the efforts of Russian operatives, Thompson said: “They certainly weren’t successful at having really any influence in the 2016 election.”

Joyce raised concerns about President Barack Obama’s handling of reports that Russia was attempting to influence the election. A Federal Bureau of Investigation investigation into Russia’s effort started in July 2016. Then, in December 2016, Obama signed an order that expelled 35 Russian diplomats, locked down two Russian diplomatic compounds and expanded sanctions against Russia in response to the attack on the election.

“He allowed that interference to continue through the presidential election,” Joyce said. “I think that President Obama has some responsibility in this. This is not a one-party issue. This occurred on his watch. When the first interference was made aware to President Obama he did not pursue it aggressively enough.”

Joyce continued: “Moving forward, no one

– and I repeat this ‘no one’ – should interfere with elections in the United States, whether it’s a presidential election, a congressional election or a local election. We have the obligation to have free and safe elections, and there should be no interference from foreign governments.”