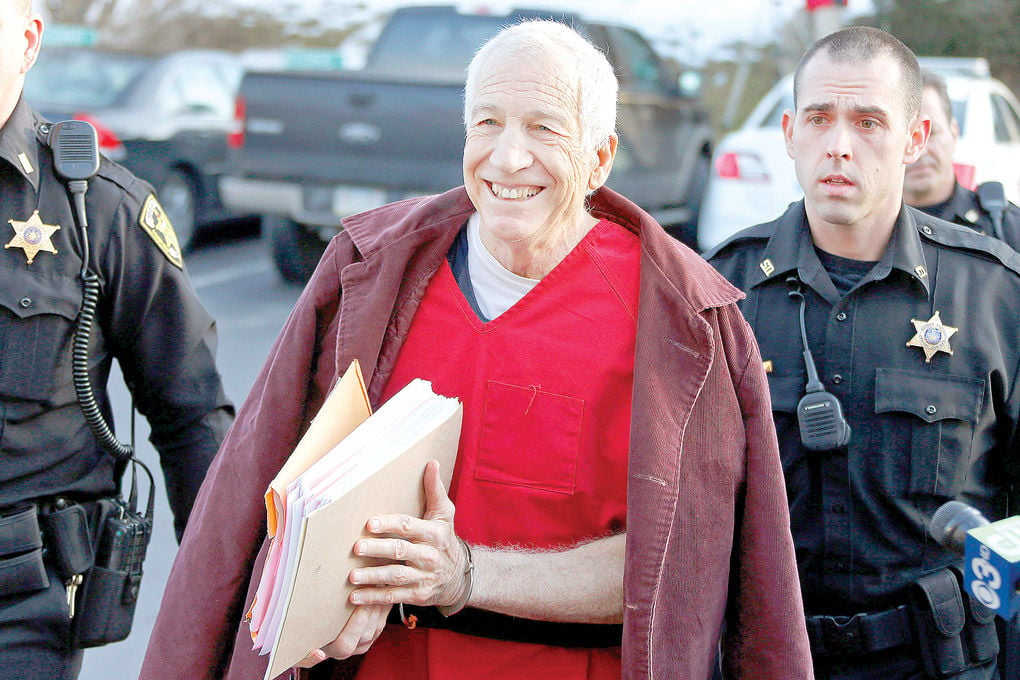 Jerry Sandusky’s attorneys will be back in a Centre County courtroom on Tuesday, arguing that the prison sentence for his child sexual abuse conviction should be “reconsidered.”

Judge Maureen A. Skerda, of Warren and Forest counties, announced the upcoming hearing in an order posted on Jan. 17. Associated Press reporter Mark Scolforo – whose byline has followed the Sandusky saga since 2011 – says the disgraced former Penn State coach may even appear.

Sandusky’s attorneys – and his supporters – continue to push back on the outcome of his criminal trial in 2012, when the ex-coach was convicted on 45 of 48 counts of the sexual abuse of boys in one of the biggest stories in Pennsylvania history.

His legal team was rebuffed by the state Supreme Court in its pursuit of a new trial – so his lawyers sought at least a re-sentencing, which they were granted. Last November, Sandusky was given the same sentence handed down to him in 2012 – 30 to 60 years in prison.

One person in Sandusky’s corner is Joseph Stains, a Methodist pastor and volunteer member of The Tribune-Democrat’s Reader Advisory Committee, whose series of columns earlier this month on the editorial page and at www.tribdem.com sparked varied reactions.

Stains – citing research by author Mark Pendergrast – claimed overzealousness by Sandusky’s prosecutors in pursuing a conviction, an inexperienced and overmatched defense team, and witness testimony inconsistencies, including that of some accuser victims.

At the end of his series, Stains said Sandusky deserves a new trial – this time in federal court.

His columns were not a reflection of the views of this newspaper or its editorial board. They were strictly his opinions on a controversial subject.

We don’t publish columns because we believe everyone will agree with the writers – although we want opinion pieces to offer reasoned arguments and not inflammatory personal attacks. We also consider that a newspaper’s editorial page has a particular ability to provoke reflection.

Although The Tribune-Democrat’s editorial board does not agree with the premise that Sandusky was convicted in an unfair trial, we did allow for Stains’ contention that concerns about Sandusky’s trip through the legal system have not been critically examined by most news media outlets – including us – despite opinions by some legal and sex abuse experts that his prosecution was a rush to judgment.

Most comments on our website backed Stains, or at least portions of his argument. One online reader posted a thank you to the newspaper for “having the guts” to run his columns.

Facebook produced a more extensive and spirited response. Dozens of comments – personal and sometimes very passionate – found their way onto posts with links to Stains’ columns.

• Some questioned Stains’ willingness as a pastor to take up the cause of a convicted child-molester. (“Disgusting. The further I read I was in more and more disbelief that not only was this published, but written by a religious leader.”)

• Others backed Stains for his courage, knowing he would face strong reactions. (“There is a lot of information investigated and proven in the last eight years that most people have no idea about because the media will not publish what is proven.”)

• Some victims advocates felt betrayed by a newspaper and its editor who have been on their side throughout the Sandusky, Stephen Baker and Dr. Johnnie Barto abuse cases. (“So I guess we punish all of our victims by forcing them to relive it again and again? Are there false accusations out there? It would be a lie to say there isn’t. But for the people who were actually victimized, you’ve put this garbage out there for people to feed on.”)

• And several commenters didn’t take sides concerning the Sandusky case at all, but rather just wondered where the debate might lead.

These and other comments and viewpoints are instructive, and will be considered as we continue to cover the issue of child sexual abuse.

Thoughtful feedback from our readers is always helpful in presenting issues for public debate.

Meanwhile, the legal challenges to Sandusky’s conviction roll on, and so will opinions about his case.

Many media outlets recently released their Top 10 news stories of the past decade, and the Jerry Sandusky scandal has been named the top news …