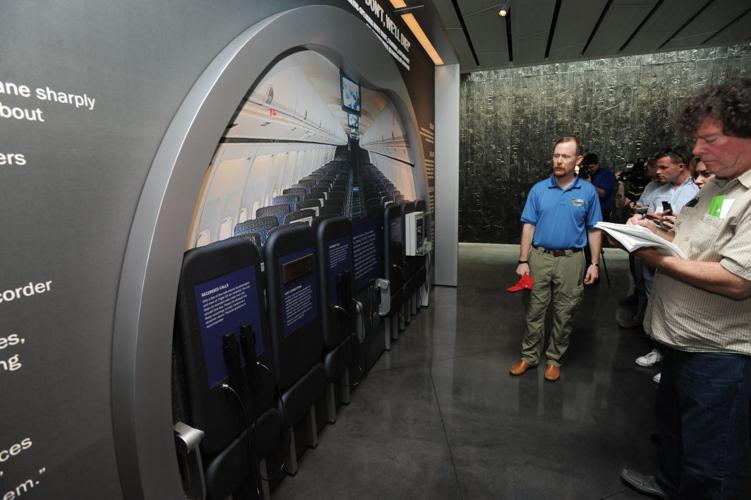 On the morning that terror shook the nation and a passenger jet crashed into a field near Shanksville, Linda Gronlund left a chilling message on the telephone answering machine of her sister, Elsa.

“I only have a minute. I’m on United 93. It’s been hijacked by terrorists.”

Gronlund was among 40 passengers and crew members who perished when United Flight 93 crashed.

Now a recording of her final phone call from that doomed plane to a loved one is part of the new Visitor Center at the Flight 93 National Memorial. That phase of the memorial officially opens Thursday.

Gronlund, from Greenwood Lake, New York, called her sister at 9:46 a.m. from aboard Flight 93, which struck down in a former strip mine just 17 minutes later.

That same morning, terrorists flew hijacked jets into both towers of the World Trade Center in New York and the Pentagon near Washington, D.C.

Investigators say the passengers and crew of Flight 93 rushed the cockpit, having heard reports of the other hijackings, bringing the plane down 20 minutes short of its likely target, the U.S. Capitol.

The calls to family members of three individuals on that plane will remind visitors to the memorial that while 9/11 was a national and global event, each person whose life was taken represents a very distinct point of grief for those left behind.

Flight attendant CeeCee Ross Lyles left a message for her husband Lorne - “I want to tell you I love you,” she says. “Please tell my children I love them very much.” - and also called United Airlines to report the hijacking.

A recording of Lyles’ words was played during the terrorism trial of 9/11 conspirator Zacarias Moussaoui.

Her family members from Fort Pierce, Florida, visited Shanksville on Wednesday to see the Visitor Center for the first time, knowing CeeCee’s voice could be heard again just by picking up a phone at the Flight 93 plane interior display.

“She made calls to the airline as well as to Loren,” Frances Watson, Lyles’ aunt, said. “That ties together both the family and the United States and everything that happened on 9/11. The very personal experiences are also part of this history.”

The Flight 93 Visitor Center tells the story of Sept. 11, 2001 from the earliest news reports through the federal investigation with video clips, artifacts from the crash site and chilling recreations of the flight path, the action of the plane and the interior of United 93 where the passengers and crew staged their stand against the terrorists.

Regional media toured the Visitor Center on Wednesday. Many who paused to hear the answering machine recordings were moved to tears.

“That was a decision that those family members made, that they wanted to share the voices of their loved ones,” said Stephen M. Clark, superintendent of Western Pennsylvania Parks, including the Flight 93 National Memorial,

“To me, all of the panels in this building are powerful and emotional,” Clark said. “But those recordings show the bravery and unbelievable courage those passengers and crew showed. And yet, they were calm in the face of their own deaths. You sense the sincerity that comes over you in those moments.”

In her message to her sister, Gronlund keeps her wits enough to provide the location of her safe in a closet, and instructions for opening that box containing her personal papers and valuables.

A message left by Lauren Catuzzi Grandcolas, of San Rafael, California, is also part of the Sept. 11 memorial in New York.

“I just wanted to tell you I love you,” she says. “We’re having a little problem with the plane. I’m totally fine. I love you more than anything. Just know that.”

Lyles tells her husband: “I hope to be able to see your face again, baby. I love you. Bye.”

Ed Root has no last recordings to remember his cousin, flight attendant Lorraine Bay. Root represented the Families of Flight 93 organization in planning the Visitor Center displays, and marvels at the willingness of those families to share heart-wrenching moments - to remind the world of the human side of what took place 14 years ago Friday.

“We all know what happened to that plane,” Root said. “But when those calls were made, they were hoping against hope that things would turn out differently.”

Gronlund’s last recorded words in a message to her sister can only be heard by the public at the Shanksville site.

She is poised throughout, except when her voice begins to crack at the end.

Chip Minemyer is the editor of The Tribune-Democrat. He can be reached at (814) 532-5091. Follow him on Twitter @MinemyerChip.

For 14 years, volunteers and National Park Service staff have told the story of Flight 93 in words, photos and through the memorial itself.

On Thursday, the National Park Service will unveil a new, multi-sensory narrative meant to refresh the reality of the events of Sept. 11, 2001 – as well as the humanity of its victims and heroes – in a concrete fashion.

Each vessel for the Flight 93 heroes’ story brings its own dimension.