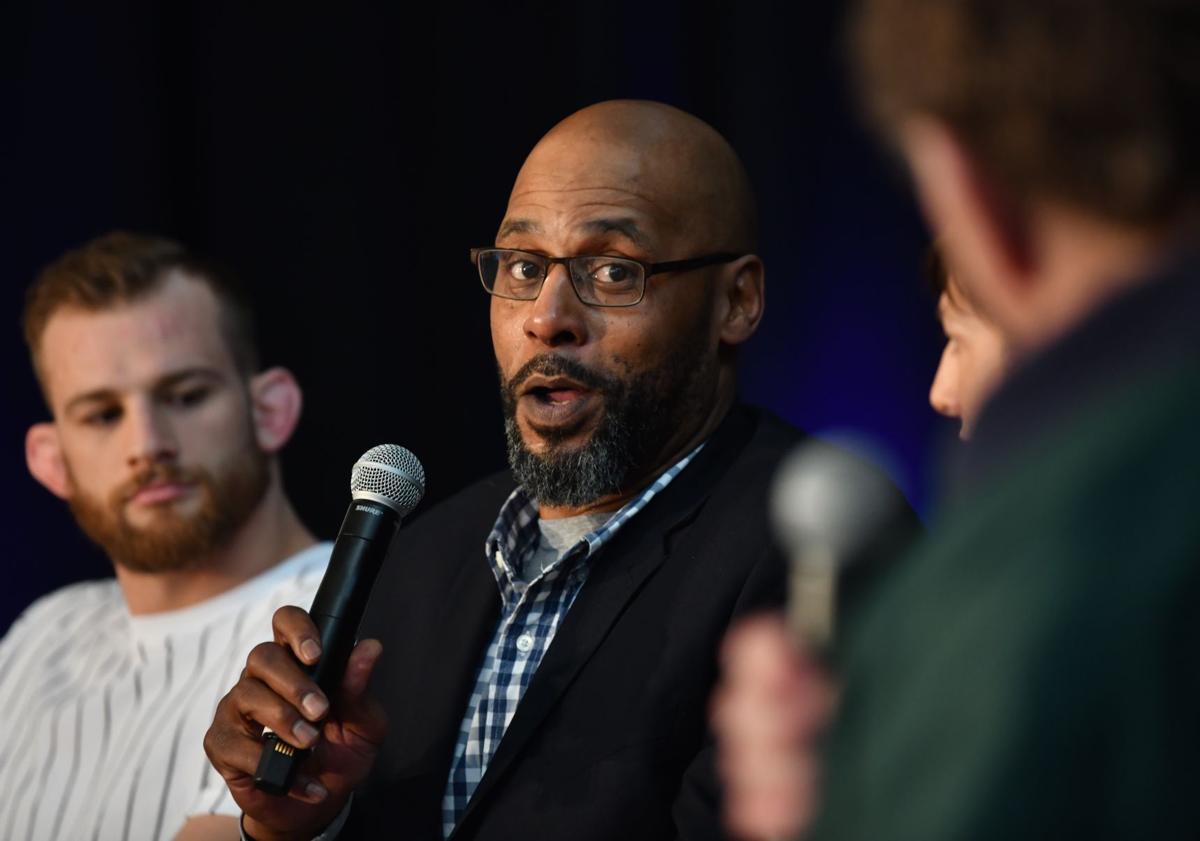 We sat together high above the wrestling mats on the floor of the old Hersheypark Arena on a weekend when the Johnstown man was honored among 10 inductees named to the Pennsylvania Wrestling Coaches Hall of Fame.

He recounted his remarkable run to the 1984 state heavyweight wrestling title for Greater Johnstown High School – which didn’t even have a wrestling team at the time.

He recalled the thrills of starring at the collegiate level for his hometown school, the University of Pittsburgh at Johnstown Mountain Cats, and the ridiculous feat of winning six NCAA wrestling titles in three years – three in Division I and three in Division II.

On that day in 1993, Haselrig was a few years removed from making the team with the Pittsburgh Steelers, a year past playing in the NFL Pro Bowl as a guard – without the benefit of a college football background.

His ascension to sports royalty was enough to make your head spin – even more than the thin air in the upper levels of the arena, while young wrestlers chased their own glory far below.

Haselrig passed away Wednesday of an undisclosed illness at his Johnstown home.

What word to use in describing his accomplishments?

Had we been sitting in Las Vegas instead of Chocolatetown USA, I may have done just that – as so many already had.

His uncle, Bruce Haselrig, a coach and well-known official, basically raised Carlton – getting him involved with wrestling and cultivating a passion for competition.

“I used to come down here a lot when I was a kid,” Carlton said in Hershey. “I’d sit way up here when I first started coming down to states with my uncle. I must have been in seventh or eighth grade. I loved to watch from up here, see those fans going crazy. I dreamed that some day I’d be down there on those mats. But I thought I’d never get the chance to do it.”

Pat Pecora bet the house on Haselrig, bringing the young man home to Johnstown to wrestle for UPJ. Pecora was a young coach when his heavyweight rolled to a 143-2-1 record, including 122 consecutive matches without a loss, and a 15-0 record in NCAA tournaments.

The Mountain Cats, built on the Haselrig foundation, became one of the premier wrestling programs in the nation, and Pecora has now won more dual meets than any other collegiate coach at any level.

“Coach (Pat) Pecora was a true friend to me,” Haselrig said in 1993, and added: “Those six titles will always be there. Nobody can take them off the books. It’s something I did.

“I had chances to leave UPJ, other offers. But Coach Pecora showed an interest in me as a person. It would have been hard for me to leave after that. I stayed there and finished everything I started – I won the titles, got my college degree and moved on.”

The Steelers rolled the dice on the guy from Johnstown, and won big. They drafted him in the 12th round, then cut him, then signed him as a free agent. Within two years, with Haselrig leading the way on sweeps for halfback Barry Foster, the Steelers had one of the best running games in the NFL.

And the Johnstown kid was picked for the 1992 Pro Bowl where names such as Rod Woodson, Dan Marino, Howie Long, Junior Seau and Thurman Thomas joined him on the AFC roster.

“The mental things you need in wrestling carry over to football,” Haselrig said in that 1993 interview. “In wrestling, you’re out there all alone. Nobody can do it for you. You have to develop survival skills.”

Haselrig was a survivor, beating ridiculous odds as a competitor before cascading through years of missteps that ended his football career, strained relationships and landed him in prison.

If his rise to the top by 1993 was unbelievable, what of what happened after that?

He walked away from the Steelers but resurfaced to play for the New York Jets, all while battling substance abuse issues.

After we talked in 1993, he made considerably more headlines for his stumbles than for his triumphs.

A few years ago, he told The Tribune-Democrat: “I’m at peace with all of that. I did what I did, both on the field and off the field.”

The Haselrig of the past decade or more seemed to be at peace – first competing in mixed martial arts, then settling in his hometown to help coach young football players and wrestlers.

World champion heavyweight and two-time Olympic gold medalist Bruce Baumgartner met up with that Haselrig two years ago, when the NCAA Division I Championships were held in Pittsburgh.

“I know Carlton went through some struggles through the years,” Baumgartner said Wednesday. “But at the end, it really seemed like he had everything together. It sounded like he was doing great. I am really glad I got to catch up with him and his family at NCAAs. It was so shocking to get the news.”

Haselrig helped mold Mariah Harris, a Greater Johnstown graduate and a rising star in women’s wrestling. She joined her mentor as a national collegiate champion this past winter, and is now training for the 2021 Olympics.

Harris knows Haselrig’s story – the whole story. She is inspired by his rise to athletic glory – and his ability to rise up and stay positive when things weren’t going well.

“He was so important to Johnstown,” she said. “He gave Johnstown hope.”

I’ve run into Haselrig many times since that day in Hershey – got a big hug during a Steelers-related gathering in Central Park, shook his hand and caught up at the 2016 Border Brawl.

Upon hearing that his health was failing, I would visit with his wife Michelle at Taco Chellz – the downtown restaurant they opened together just over a month ago. The signature item is the “Giant Killer Taco,” named for the man whose life, many have said, was the stuff of novels and movies.

Michelle never provided me with details on Carlton’s health issues, but her eyes told me it was very serious.

Michelle had bet the house on Carlton, too.

Haselrig’s passing sparked a flood of tributes across social media – from former football teammates, wrestling fans and competitors, family members, close friends he grew up with and competed alongside in the city.

My mind went back to 1993 and Hersheypark Arena, where the athlete who was already a legend in two sports sat with a newsman still finding his way in Johnstown, not yet sports editor or editor-in-chief.

In our first interview of many, Haselrig was funny, kind, honest. He was confident – but not in awe of his own success.

Just as he was every time I spoke with him afterward – regardless of the circumstances.

I had hoped for another conversation that never happened – a chance to ask him about his health, the odds he might be facing.

To hear him say, one more time: