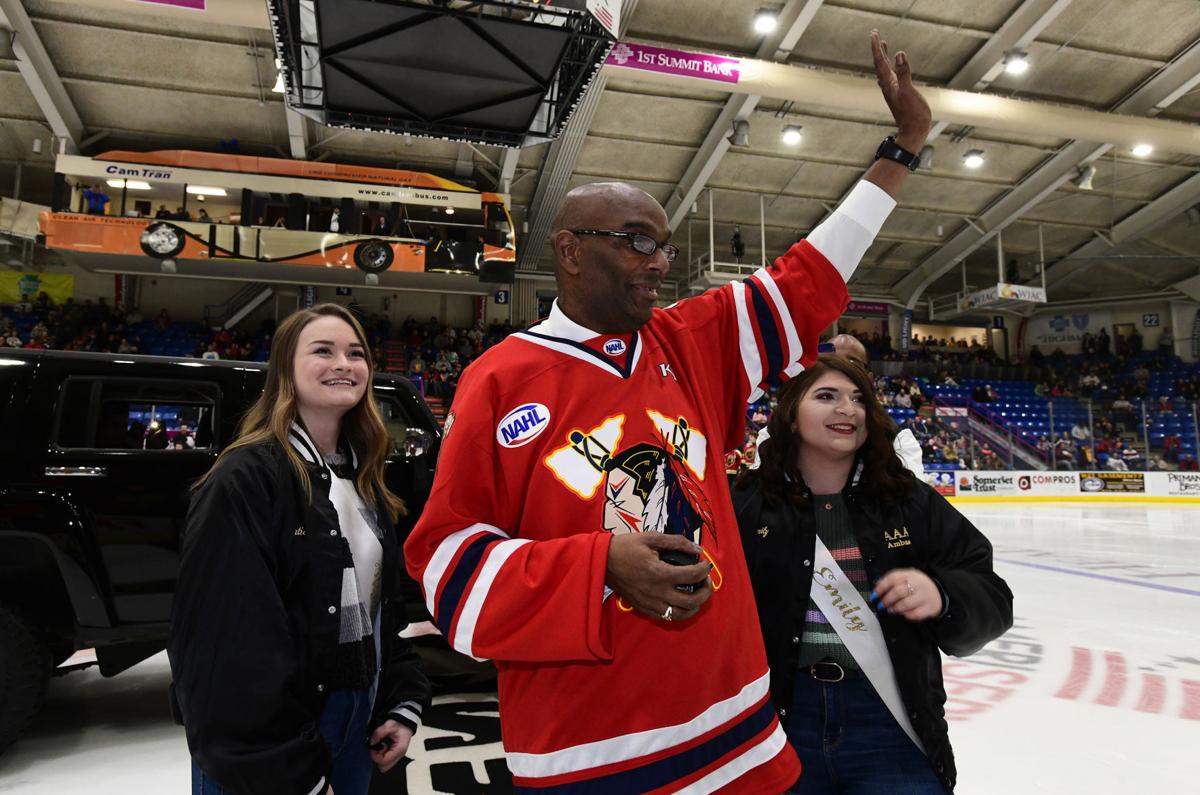 Charlie Johnson waves to the crowd while escorted by AAABA Ambassadors Katie Lambert (left) and Emily DeMartino on Friday, Jan. 17, 2020. 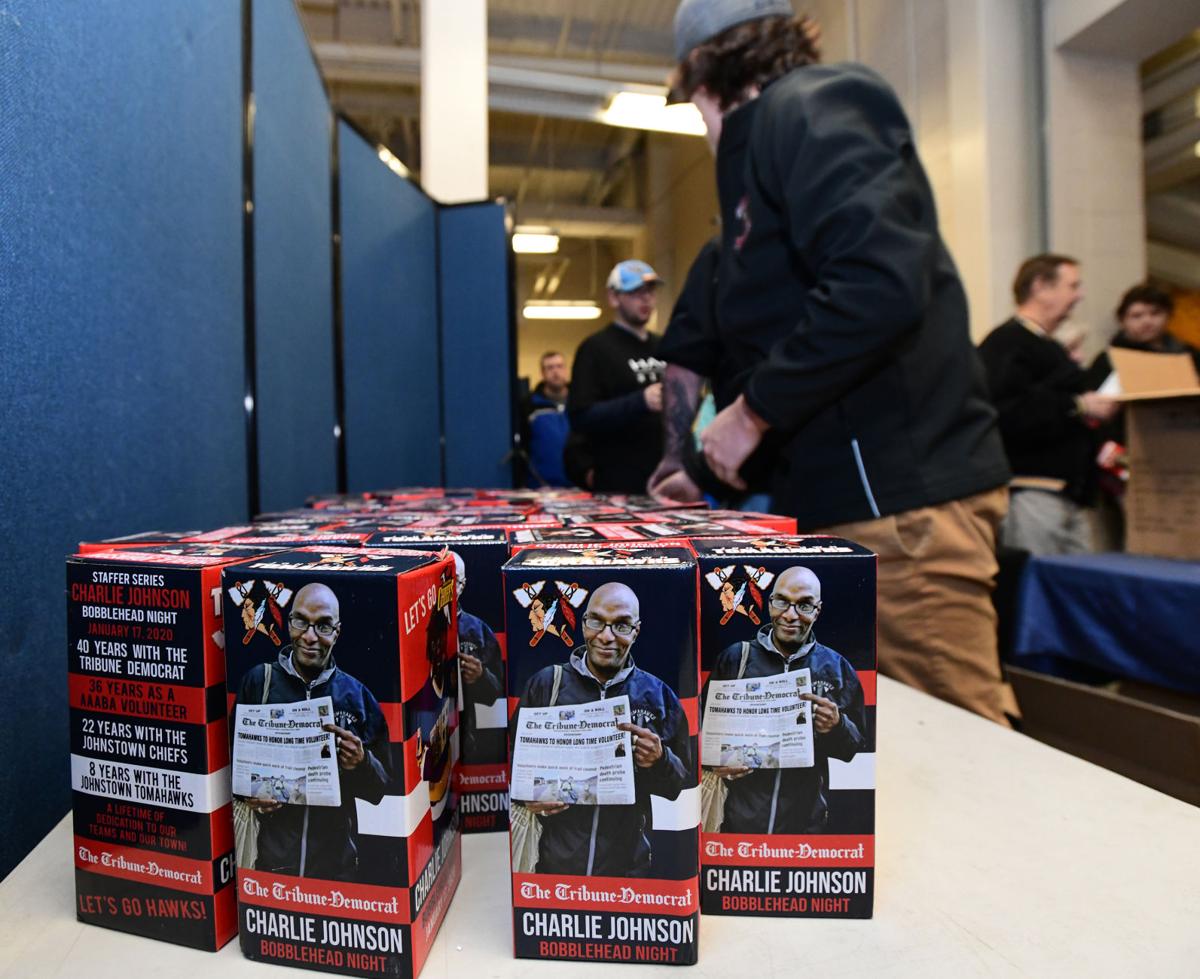 Charlie Johnson bobbleheads are shown before distribution at a Johnstown Tomahawks game on Friday, Jan. 17, 2020. 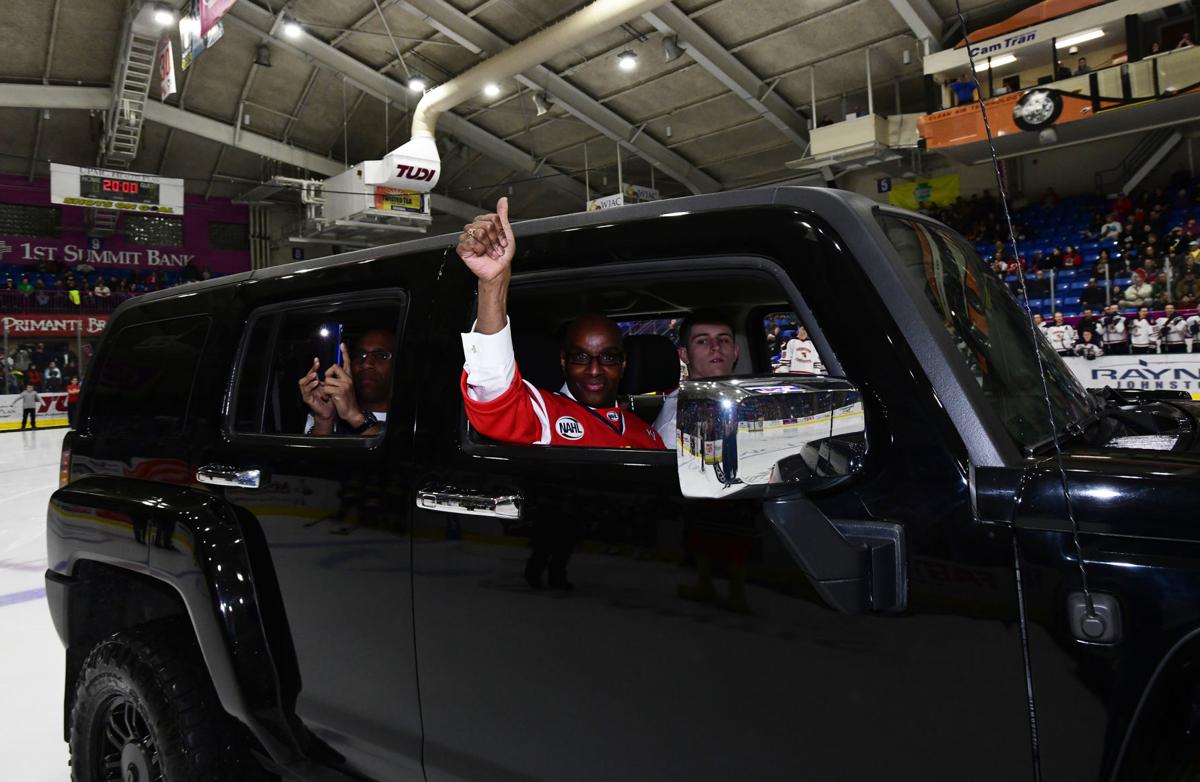 Charlie Johnson waves to the crowd while escorted by AAABA Ambassadors Katie Lambert (left) and Emily DeMartino on Friday, Jan. 17, 2020.

Charlie Johnson bobbleheads are shown before distribution at a Johnstown Tomahawks game on Friday, Jan. 17, 2020.

As the doors opened, Charlie Johnson got out and waved to the crowd of 2,731 at the Johnstown Tomahawks game against the Maryland Black Bears.

Charlie Johnson bobblehead night attracted one of the largest crowds of the Tomahawks’ season.

“I think it’s really cool that they did this for him to show the respect that he deserves,” said Justin Fenimore, coach of the Greater Johnstown High School hockey team.

A Johnstown icon well-known for his countless hours of volunteer work at hockey and baseball games, Johnson received a warm welcome before he participated in the ceremonial puck drop at center ice.

Charlie usually isn’t in the spotlight while performing a variety of tasks on game nights.

Johnson spent 22 seasons volunteering with the former Johnstown Chiefs team in the ECHL and all eight seasons with the Tomahawks.

He’s been a part of 36 AAABA Tournaments at Sargent’s Stadium at the Point. Johnson delivered The Tribune-Democrat in Kernville and downtown Johnstown for 40 years until his April retirement.

It might seem as if everyone knows Charlie. His bobblehead was in demand.

More than an hour before the game, the War Memorial lobby was packed with fans waiting for the gates to open. At one point, security personnel announced that no more people could be allowed into the building until the gates opened.

The first 1,000 fans received a voucher and proceeded to an area where Tomahawks staffers handed out the bobbleheads. The line extended past the home locker room and the Slap Shot Lounge.

“This is our first game of the year,” Jim Black of Southmont said. “I enjoy hockey. I love the bobblehead.”

Anise Black joined Jim as they headed toward their seats.

“I used to work at Gleason Insurance Agency and Charlie delivered our newspapers every day when I was at the front desk,” Anise Black said. “That’s how I got to know him years ago. Love the bobblehead.”

Johnson requested that a fundraiser for the Greater Johnstown High School hockey program be held in conjunction with the game.

Fenimore and his players, sporting their columbia blue and black jerseys, collected donations.

“Very heartfelt,” said Fenimore, who was a player on Johnstown’s 1992 state runner-up hockey team. “Charlie went to all of our games with us back in the early 1990s. He rode the bus with us to every trip to Pittsburgh. He didn’t miss a game. He was our good luck charm.

“That he thought of us first, that’s why I’m here, to support Chuck.”

“I’ve known Charlie for years. He’s a legend. That’s why we’re here,” said Rigby, who at intermission presented Johnson a certificate of recognition on behalf of the Pennsylvania House of Representatives.

“This is great,” added Rigby. “Well-deserved. Certainly nobody is more dedicated than Charles to this area as a volunteer putting himself out there to help.”

Johnstown Tomahawks coach Mike Letizia thought he saw a spark during a Tuesday practice after he juggled his forward lines.