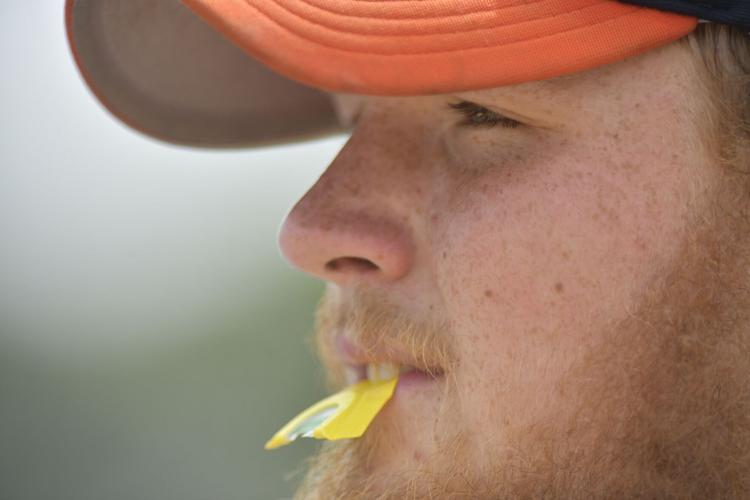 North Carolina Disco Turkeys player # 26 D.J. Musser uses a turkey call to give support to his teammates between plays on Tuesday, August 3, 2021. 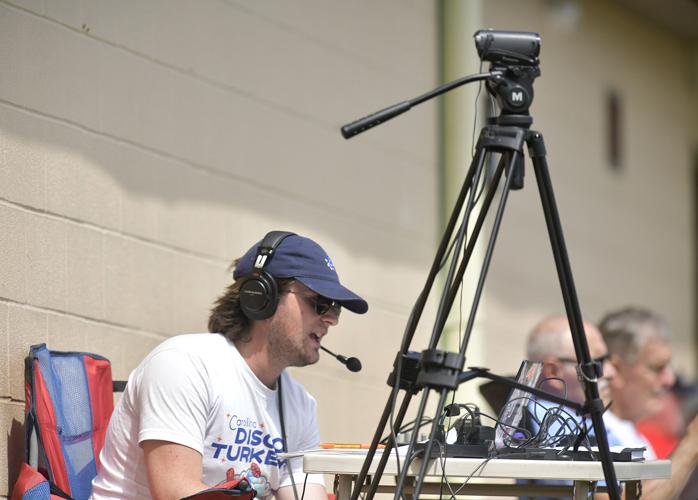 Broadcaster Graham Tuck gives a "Game Day Gobble" play-by-play of the Carolina Disco Turkeys' game against Youngstown in Pool A action on Tuesday, Aug. 3, 2021, at Roxbury Park. Tuck uses YouTube to broadcast the game live back to the Winston-Salem, North Carolina, area. 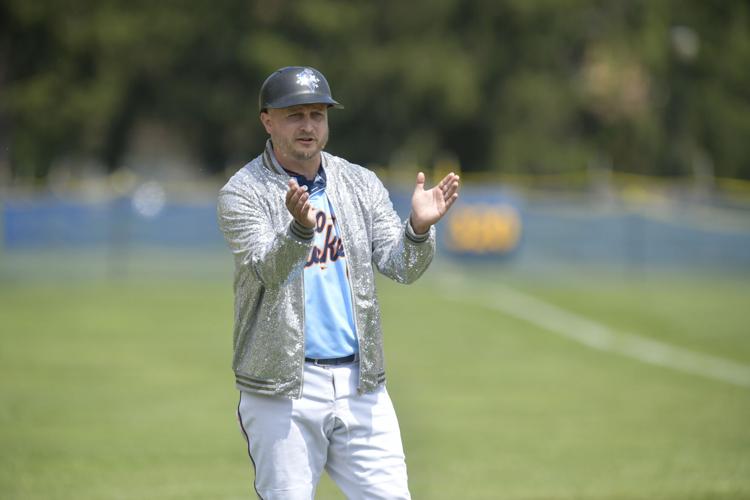 North Carolina Disco Turkeys manager Kirk Cabana wears a disco jacket while coaching his team from third base, during an AAABA game against Youngstown at Roxbury Park on Tuesday, August 3, 2021.

North Carolina Disco Turkeys player # 26 D.J. Musser uses a turkey call to give support to his teammates between plays on Tuesday, August 3, 2021.

Broadcaster Graham Tuck gives a "Game Day Gobble" play-by-play of the Carolina Disco Turkeys' game against Youngstown in Pool A action on Tuesday, Aug. 3, 2021, at Roxbury Park. Tuck uses YouTube to broadcast the game live back to the Winston-Salem, North Carolina, area.

North Carolina Disco Turkeys manager Kirk Cabana wears a disco jacket while coaching his team from third base, during an AAABA game against Youngstown at Roxbury Park on Tuesday, August 3, 2021.

LILLY, Pa. – After finishing a video interview on Wednesday, Carolina Disco Turkeys Manager Kirk Cabana had a question of his own. Completely unsolicited, he asked “Want to get me doing a backflip?”

So the filming started again.

Cabana then proceeded to do a quick backflip to the cheers of his players, shortly after they defeated the Brooklyn Cougars in an All American Amateur Baseball Association Tournament pool game at Lilly-Washington Township War Memorial Park and advanced to play Johnstown’s Paul Carpenter Capital Advisors at 7 p.m. Thursday.

His spontaneous backflip was not connected to any conversation or event that was happening at the moment. But it was completely in the Disco Turkeys’ fun-loving style. The first-year franchise has gotten a lot of positive attention in Johnstown with its sparkling player-of-the-game jacket, turkey call, comedic antics, visit to meet the hillside Bomb Squad and – of course – peacock logo, which team president Greg Sullivan described as a cross between baseball legend Babe Ruth and disco movie star John Travolta.

“We’re the Disco Turkeys, and we like to have some fun, playing baseball fast, and loose and aggressive, and trying to be respectfully rowdy, as much as possible,” Cabana said.

“We’re just having fun, just doing stuff to keep more than just our teammates into it,” Nichols said. “It’s fun to watch the crowd’s reaction and stuff like that. I think if you take baseball sometimes too seriously, you can get uptight and worry about like making the simple plays. So whenever it’s just fun, loose, you’re doing what you’ve been doing since you’ve been 12 years old. It kind of keeps you in it in a way.”

Sullivan said the fun aspect has been part of the Disco Turkeys’ identity since the club started.

“It’s just about the guys having fun because we feel like we play a lot better when we’re playing loose,” Sullivan said.

“Our fans really enjoy that, too. We play in a minor league ballpark, so we couldn’t just come out and just play really straightforward baseball. We had to have a mascot, we had to have really cool uniforms to really fit the stage we’re playing on. We had to get players that could embrace not only playing well, but also a certain degree of showmanship as well. Baseball is still important. We’re still developing them for their college programs, like a lot of those other programs up here. But we’re also having a lot of fun, engaging with the crowds.”

Catcher Christian Ezzell said having fun playing has been “easy for us because from day one we’ve really built a family – the Disco Turkey Nation.

The Disco Turkeys were examining their chances of playing against Paul Carpenter – the Johnstown-1 team – under the Sargent’s Stadium at the Point’s lights, as soon as the pool drawings took place.

So they will face each other in a knockout game.

“Potentially the opportunity to play in front of thousands of people on a big stage, in the quarterfinals, against the host team, what more can you ask for for our first trip to the AAABA Tournament?” Cabana said.

Cabana described the tournament so far as “joyous” and “just the culmination of our whole summer.”

“This is what we’ve been touting, coming here to get this,” Cabana said. “It’s just been so fun. The city of Johnstown has delivered on the experience.”

Disco Turkeys fans not only will be able to watch the game in person, but also online, as the franchise has been broadcasting its contests live on its YouTube channel.

“Every parent wants to watch their kid keep playing, especially when they’re playing at the next level, like these guys are,” said Graham Tuck, who broadcasts the games. “And so when you have a brand like the Disco Turkeys do, when you have a kind of team like we have that’s playing winning baseball, the very least that you can do is put your product out there for people to see, even if they can’t make it.”

Paul Carpenter sent 11 players to the plate and used a six-run sixth inning to reestablish the lead, then held off Buffalo All In One 10-6 in front of 1,503 fans.