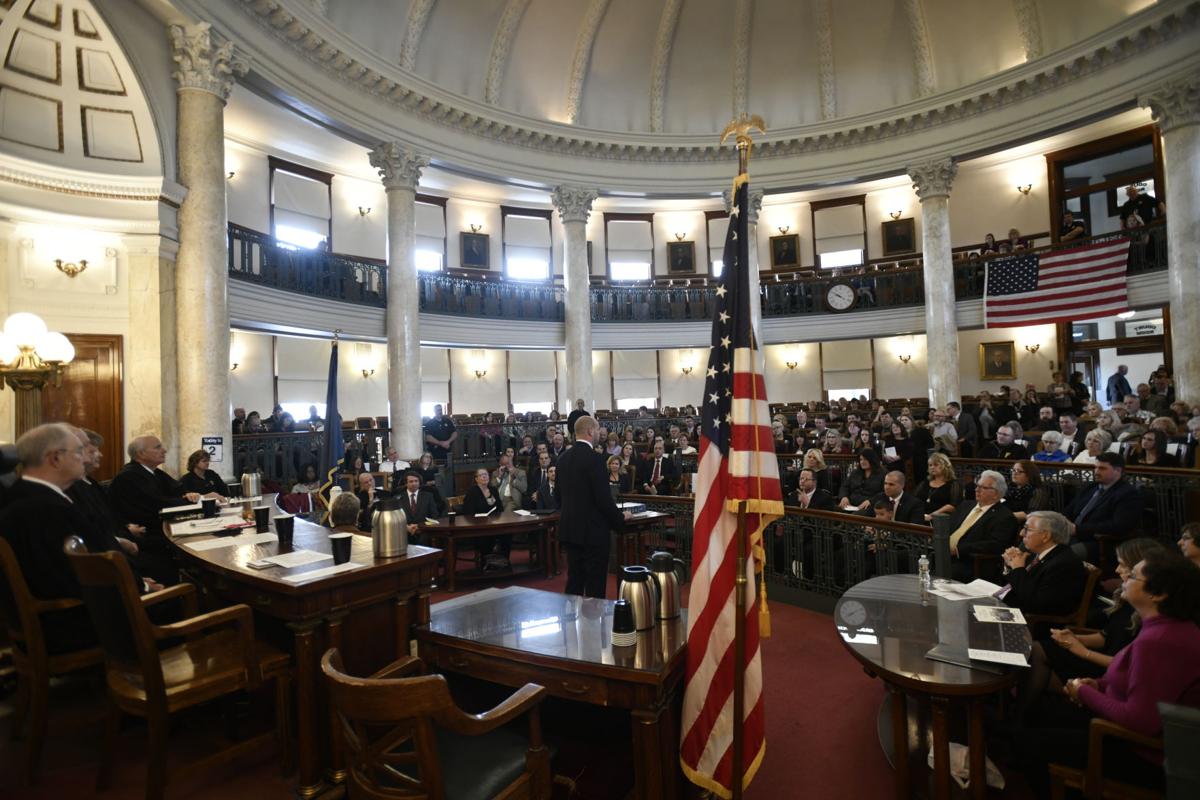 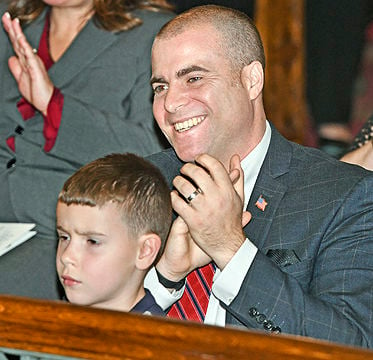 Newly elected Cambria County D.A. Gregory J. Neugebauer is all smiles with his son R.J., as they witness officials take their oath offices. 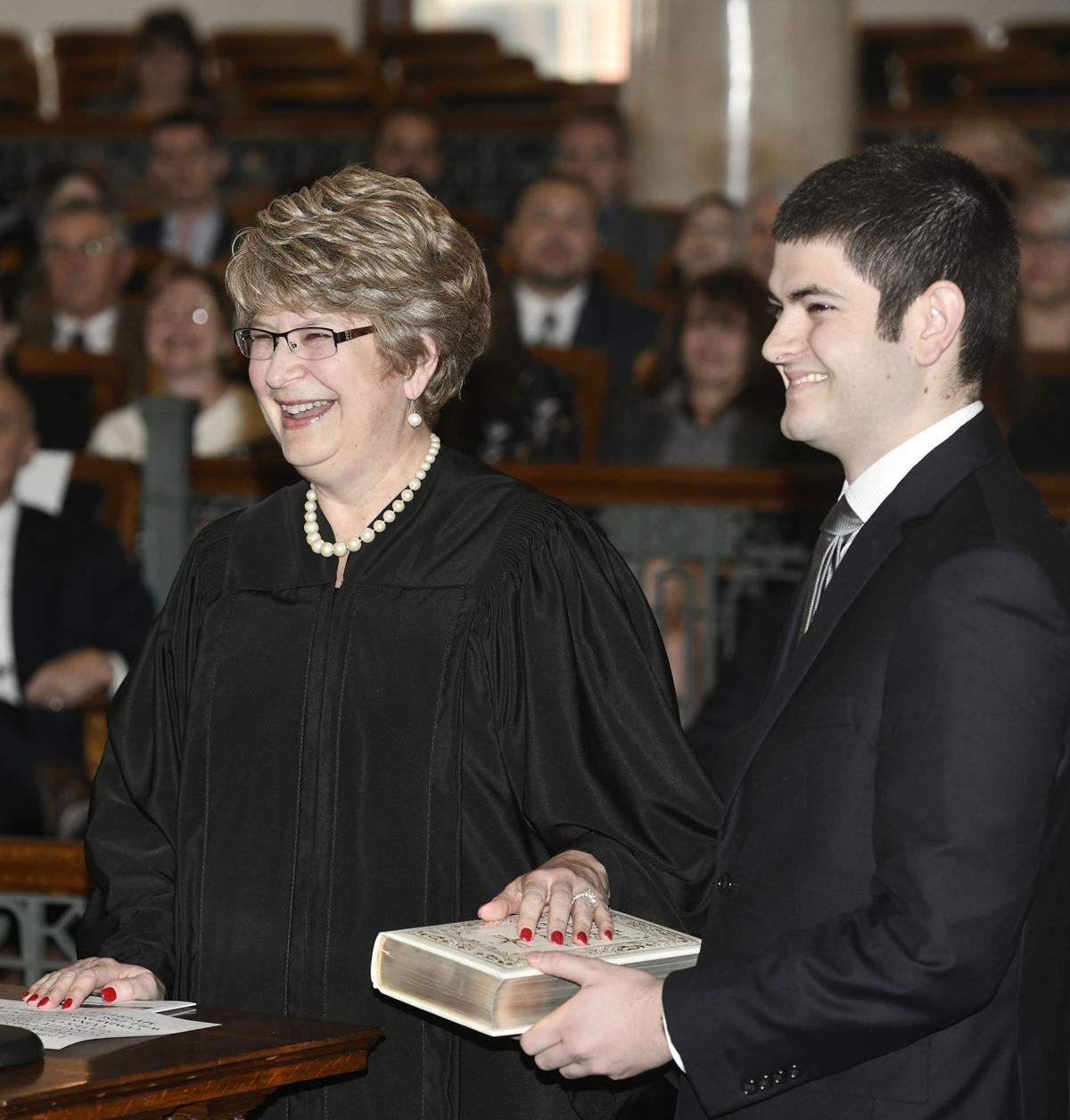 Honorable Judge of The Court of Common Pleas, Linda Rovder Fleming smiles after taking her oath of office with her son, Tyler, on Jan. 3, 2020.

Newly elected Cambria County D.A. Gregory J. Neugebauer is all smiles with his son R.J., as they witness officials take their oath offices.

Honorable Judge of The Court of Common Pleas, Linda Rovder Fleming smiles after taking her oath of office with her son, Tyler, on Jan. 3, 2020.

EBENSBURG – Thursday morning marked a partial changing of the guard at the Cambria County Courthouse as six new office-holders, as well as several incumbents, took oaths to “support, obey and defend” the Constitutions of the United States and of Pennsylvania and to faithfully perform the duties of their offices.

District Attorney-elect Gregory J. Neugebauer said after the conclusion of Cambria County’s investiture ceremony that he plans to hit the ground running after he officially starts work on Monday.

“Day one, I have some meetings set up,” he said. “I’ve already met with a bunch of different law enforcement groups to find out what their concerns are. I intend to sit down and meet with the district judges (and) make sure they feel they’re getting what they need from the district attorney’s office. Then, it’s hitting the ground running. I hope to look at some of the unsolved homicides in short order – see if we can get some movement on those.

“I’m going to have an open-door policy. Folks are able to come in – law enforcement (is) able to come in and meet with me any time that they need, and give them the support that they’ve been, frankly, begging for for the last several years.”

“The experience – you can’t match it,” he said. “You can’t go out and get the type of experience that’s currently in the office. A good group of lawyers, smart lawyers, experienced in trials and experienced otherwise. They know what they’re doing, and they can continue doing what they know and love to do.”

Neugebauer said that there is one remaining job opening for an assistant district attorney, which he hopes to fill “in the very near future.” There are also a couple support staff positions open that he hopes to fill within the next month, he added.

Coming up in the new year for Neugebauer’s new office is the homicide trial of Paul Lehman, who has been charged with killing 19-year-old Deontaye Hurling in 2018 in Johnstown. The assistant district attorneys who are currently handling that case will continue to do so, Neugebauer said. Lehman’s trial is currently scheduled to begin in mid-April.

Commissioner-elect Scott Hunt, a Republican who spent the past 12 years as an Upper Yoder Township supervisor, also took his oath of office on Thursday and will officially take office on Monday. He will fill the spot on the Board of Commissioners currently held by the retiring Mark Wissinger, also a Republican.

“As (President Commissioner) Tom (Chernisky) has alluded to, every day in the commissioners’ office is a budget day, so I am looking forward to starting that process,” Hunt said after Thursday’s ceremony. “You know, it’s going to be a learning curve for the next few months – just getting my feet wet, going to all the authority meetings, and we’ll take it from there.”

Max Pavlovich, Cambria County’s new clerk of courts, said after Thursday’s ceremony that he thinks the transition process “has been going very well” and that he’s ready to officially take office on Monday. The Johnstown-area Democrat, a former legislative assistant and personal care home administrator, narrowly defeated Republican candidate Karen Kleinosky in the race to replace Susan M. Kuhar, who is retiring after 20 years as clerk of courts.

“Susan and her first deputy Arlene (Farabaugh) have been helping me learn the office – the different functionalities of the office and, overall, the county system and state system,” he said. “Transitioning from a long-term care facility into county government, it’s a little bit of a transition, but we deal with big numbers at the personal care home, and we’re dealing with large numbers here at the county.”

Cindy Perrone, register of wills, said she looks forward to taking office. In November, the Democrat defeated Republican candidate Jared Bowling in the contest to replace six-term incumbent Patty Sharbaugh, who is retiring. Perrone, who was a member of Sharbaugh’s staff for 20 years, called her former boss “a great role model.”

Lisa Crynock, prothonotary, said after taking her oath that she is “ready to serve.” The Republican will replace Debbie Martella, who is retiring. She defeated Democrat Carla Portash, a 30-year employee of the prothonotary’s office, in November.

“To work in this courthouse is an honor and a privilege,” Crynock said, “and it’s a privilege that I take very seriously.”

Melissa Kimla, recorder of deeds, did not address the audience after taking her oath. The Republican, a former clerk in the office, in November unseated one-term incumbent Democrat Ray Wendekier.

Among the incumbent office-holders who took oaths on Thursday were Chernisky and Commissioner B.J. Smith, both Democrats. Chernisky secured his third term in November, and Smith was elected to his second.

Smith said after Thursday’s ceremony that his top priorities for the next few years include going ahead with a planned $17 million upgrade to the county’s public safety radio system, keeping taxes from being raised, wrapping up the ongoing repair of the county’s bridges and making the county “work with blue and red together.”

Chernisky added after the ceremony that success for Cambria County comes from collaboration among the three commissioners, other elected officials, members of their staffs, business leaders, county residents and other stakeholders.

“Everything’s a top priority,” he said. “The budget, day in and day out, is a top priority. The county needs to update the 911 public radio system. We’re doing it, and the objective is to get it right from day one. … What’s the priority for the next year, 24 months, 36 months, 48 months, four years? Everything’s a priority. Doing a lot of little things right – that’s how you win.”

Ed Cernic Jr., controller, said after taking his oath that he felt “very humbled to be here before you today.” Cernic, a Democrat and four-term incumbent, held off Republican challenger Steve Dillon in November to retain his position.

Lisa Kozorosky, treasurer, said that she is “humbled” by the chance to continue running the treasurer’s office. The Democrat defeated a challenge from Republican candidate Teena Petrus in November to secure her third term in office.

Jeffrey Lees, coroner, said that he felt “very humbled and honored” to be voted in for his second term in office. The Democrat ran unopposed for re-election after Republican nominee Frank Duca dropped out of the race during the summer before the election.

Also taking oaths on Thursday were Judge Patrick T. Kiniry and Judge Linda Rovder Fleming, both of the Cambria County Court of Common Pleas. Each has served one 10-year term on the bench, and county residents voted in November to retain each for another 10-year term.

The Very Rev. Mark Begly, pastor at Our Mother of Sorrows Catholic Church in Westmont, delivered the invocation, and the Rev. Sylvia King, senior pastor at Christ Centered Community Church in Johnstown and member of Johnstown City Council, gave the benediction. Members of the Christ Centered Community Church choir sang the national anthem and “God Bless America.” Boy Scout Troop 217 presented the colors and led the audience in the Pledge of Allegiance.