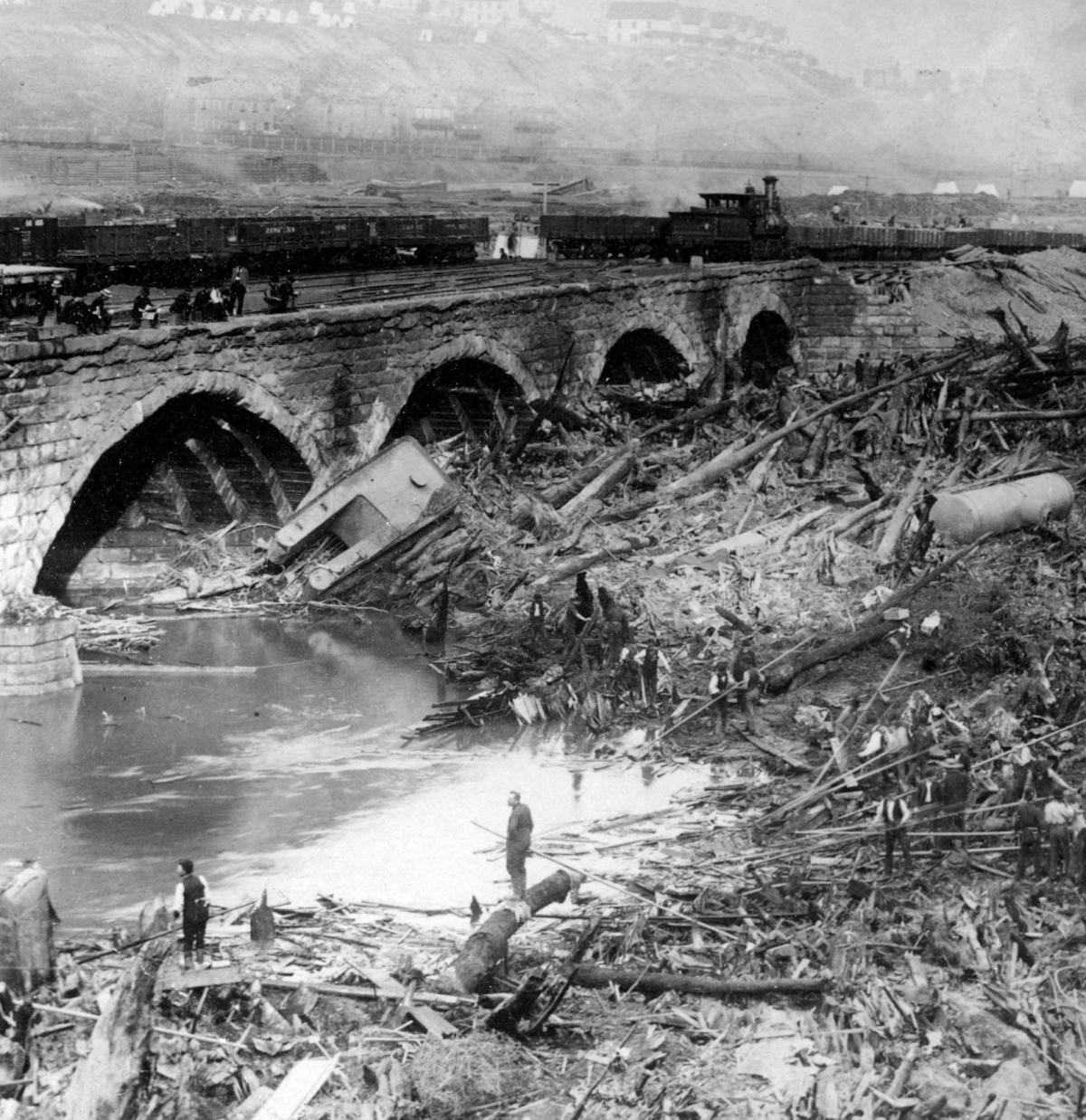 Explosives were used to clear the debris, which was spread over 30 acres and up to 30 feet deep. Residents stand near a partially cleared area. 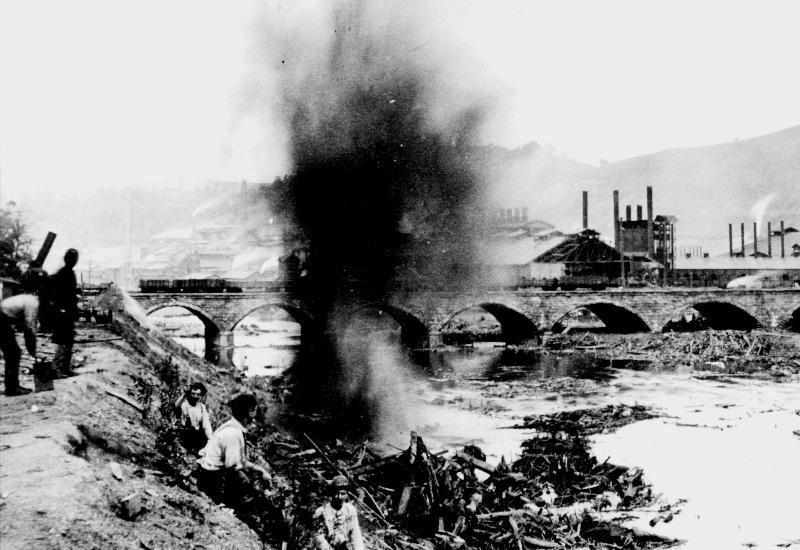 Explosives were used to clear the debris, which was spread over 30 acres and up to 30 feet deep. 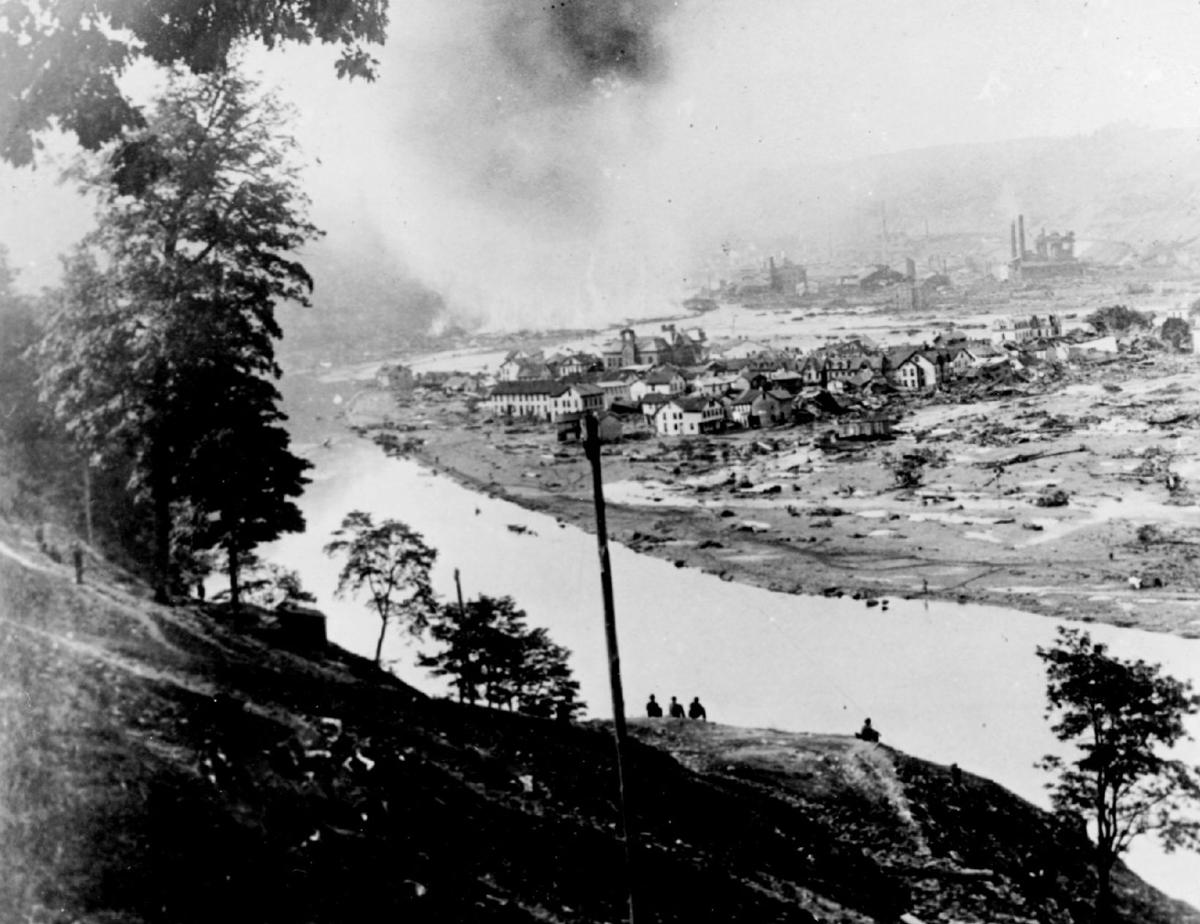 A deadly fire burns debris after millions of tons of water smashed Johnstown.

Explosives were used to clear the debris, which was spread over 30 acres and up to 30 feet deep. Residents stand near a partially cleared area.

Explosives were used to clear the debris, which was spread over 30 acres and up to 30 feet deep.

A deadly fire burns debris after millions of tons of water smashed Johnstown.

For Ken Smith, the Stone Bridge spanning the Conemaugh River just outside Johnstown’s business district is inspiring, an example of the power and stability of a structure built with integrity and intelligence.

Smith is a civil engineer who lives more than 400 miles west of Johnstown, but thinks everyone in his business needs to make what he termed a “pilgrimage” to the seven-arch stone structure that played a major role in the devastating 1889 Johnstown Flood.

“To stand there and see that bridge still standing, it meant a great deal to me and certainly helped me over the years in the kind of work I do,” Smith said in a telephone interview from his office in Indianapolis.

Smith lives in Brownsburg, Indiana, and is associate director of the division of water for the Indiana Department of Natural Resources. He has been so inspired by the bridge that he developed a PowerPoint presentation after visiting Johnstown several years ago and regularly presents at civil engineering seminars.

“I encourage everyone (in the business) I’ve spoken to over the years to make that pilgrimage to Johnstown,” he said. “This is a place where you can truly understand what your profession is about.”

The massive arch span, built of native sandstone for the Pennsylvania Railroad in 1885-87, has for 127 years carried east and west bound trains across the Conemaugh. It stopped tons of debris from as far as 11 miles up stream after the South Fork Dam failed and flooded the city in 1889.

For many years, the railroad built steel bridges needed for its trains to move over waterways, but that started to change when in 1885 work began on what was the first stone bridge of the Pennsylvania Railroad system, said Richard Burkert, president and CEO of the Johnstown Area Heritage Association.

It was built by Sparks & Evans of Philadelphia and opened to train traffic in 1887 with three tracks. To this day, it carries trains, which now are part of the Norfolk Southern Railway.

The bridge, with its seven arches, blocked millions of pounds of debris gathered by the roaring flood moving through the valley from South Fork to Johnstown.

Historical accounts describe it as a backup amounting to 30 acres of debris and corpses 30 feet deep.

Many of the people were alive when they reached the debris pile, with estimates by some historians that as many as 80 people perished at the site, many in fires that ignited in the backup.

It took six weeks to clear the channel at the site of the bridge.

“They found hundreds of bodies, but many died in the flood,” Burkert said.

Victims of the water torrent turned up as far west as Bolivar and Blairsville.

“By Saturday, June 1, many people in Pittsburgh stood along the Allegheny River and watched Johnstown go by,” Burkert said.

Two weeks after the flood, bodies linked to the tragedy turned up in Steubenville, Ohio, and Cincinnati.

While praise of the strength of the Stone Bridge is warranted, Burkert said it was not hit directly by the forceful wall of water.

As the water hit Johnstown, it broke into three currents, including a wave that hit the Westmont hill, and backwash came up the Stonycreek as far as Moxham, he said.

The rush of water and debris did compromise the bridge on the eastern side, where a 700-foot chasm disconnected the rail line.

“If they were going to get supplies into Johnstown, that bridge was the key,” he said.

Meanwhile, the role the Stone Bridge played in the flood is open to opinion, said Smith.

“If it had failed, I don’t know what might have happened further downstream,” he said.

The eastern face was reinforced with concrete 40 years after the flood, and the landmark continues to inspire today.

In 2007, the Stone Bridge Committee was formed by local residents and $1.2 million was raised to refurbish facade and illuminate the span.

In September 2011, the volunteers flipped the switch on the landmark.

The bridge received an aesthetic upgrade and the lighting is with colorful programmable LED lights that change frequently.

Lighting times change throughout the year according to sunset times.

Lights or no lights, for Smith the Stone Bridge has been a major influence in his life.

“It’s a very classic, old structure. It’s cool to see something like that still functioning. To me it’s a neat thing,” he said. “I’ve talked about this place with others in the dam-safety profession ... Johnstown is just one of those places that kind of stick out.”