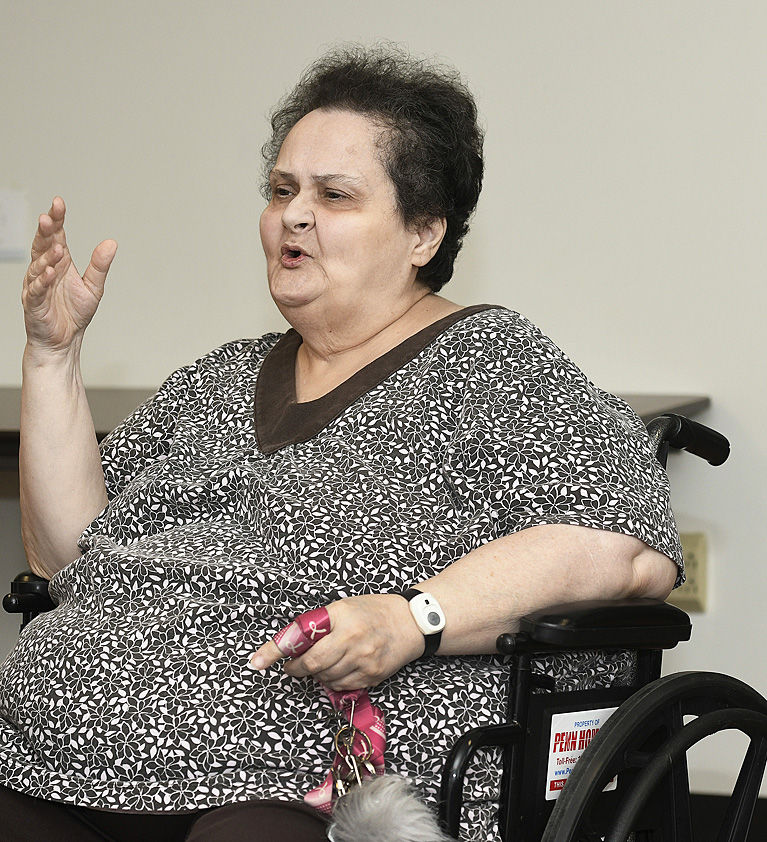 GALLITZIN – If Cathy Bolette didn’t have routine mammograms, she says she “could be full of cancer by now.”

Bolette was first diagnosed with breast cancer in 2011 after a mammogram revealed a lump deep within her right breast.

“I was calm” at the time of diagnosis, Bolette said.

She underwent a lumpectomy, took chemotherapy medication and eventually took on radiation treatments that made her sore, tired and created an infection in her incision.

“The radiation was worse; it was even worse than the surgery,” she said.

Bolette received another breast cancer diagnosis in March, this time for a lump found closer to the surface of her left breast during a routine mammogram.

“I felt a lot calmer” after the second diagnosis, Bolette said. “I had a lot of faith in my doctor. I figured, she got it the first time, she’ll get it this time.”

Bolette is now on medication for the next five years to prevent the cancer from coming back.

In both cases of breast cancer, Bolette noted that the cancerous lumps in her breasts were not discovered in self-exams and routine doctor visits.

However, Bolette’s youngest daughter, Golden, has had a hard time getting a mammogram covered by insurance because she’s not yet 40.

“That needs to change,” Bolette said.

Bolette recommends younger women who have a history of breast cancer to push for mammograms even before 40 and for all women to get routine mammograms.

“You have to do it,” Bolette said.

For those who have just received a breast cancer diagnosis, Bolette recommends paying attention to the side effects of prescribed medications and treatment and asking doctors whatever questions they may have.

“Don’t get yourself worried until you have all the information,” she said.

“There’s so many other good things in my life, I wasn’t going to let this get me down,” she said.

Forest Hills Pink Out: The Rangers will hold their annual Pink Out Game on Friday as the football squad faces Central Cambria. Forest Hills has a T-shirt and sweatshirt sale underway with a breast cancer and football design. Proceeds from the sale are donated to the Joyce Murtha Breast Cancer Center at Chan Soon-Shiong Medical Center at Windber. The school also collects monetary donations at the game and decorates the stadium with pink ribbons and balloons. The players will wear pink socks for the game.

Operation Pink Lobster: Monday through Oct. 13, Red Lobster at 525 Galleria Drive in Johnstown and 3330 Pleasant Valley Blvd. in Altoona. Throughout the week, both locations will collect donations using pink boots and sell pink paper boots to post in the lobby of the restaurants. From 4 to 10 p.m. Wednesday, all tips will be collected in pink envelopes and added to the week’s total donations. All donations benefit Joyce Murtha Breast Care Center at Chan Soon-Shiong Medical Center at Windber.

Windber Pink Out: The Ramblers have worn pink socks for football along with wristbands, tape and gloves. The pink-out game will be Oct. 11 against Blacklick Valley. All sports are encouraged to participate in the special week Monday through Oct. 12 to wear pink in support of breast cancer awareness.

Ferndale Pink Out: The Yellow Jackets’ pink-out events are sponsored by the varsity cheerleaders, who sell T-shirts in advance, have a bake sale at the game, and sell pink items to raise money for the Joyce Murtha Breast Care Center at Chan Soon-Shiong Medical Center at Windber. The football game will be on Oct. 12 against Shade, with the players wearing pink items on the field, and the other school is invited to join them in wearing pink.

Westmont Hilltop Pink Out: The Hilltoppers will play their pink-out game on Oct. 12 against Greater Johnstown. The football players don’t wear pink items, but do participate in all the activities. Cheerleaders and fans are encouraged to wear pink that day.

Central Cambria Pink Out: The school has decided to have one pink-out shirt for the entire district with each sport (fall, winter, spring) having its own pink-out night/event. Football’s night is Oct. 18 against Bishop McCort.

Penn Cambria Pink Out: Activities are set for Oct. 18, when the Panthers host Richland.

Meyersdale Pink Out: On Oct. 18, with North Star on the schedule, the Red Raiders will celebrate “Beat Cancer Night.”