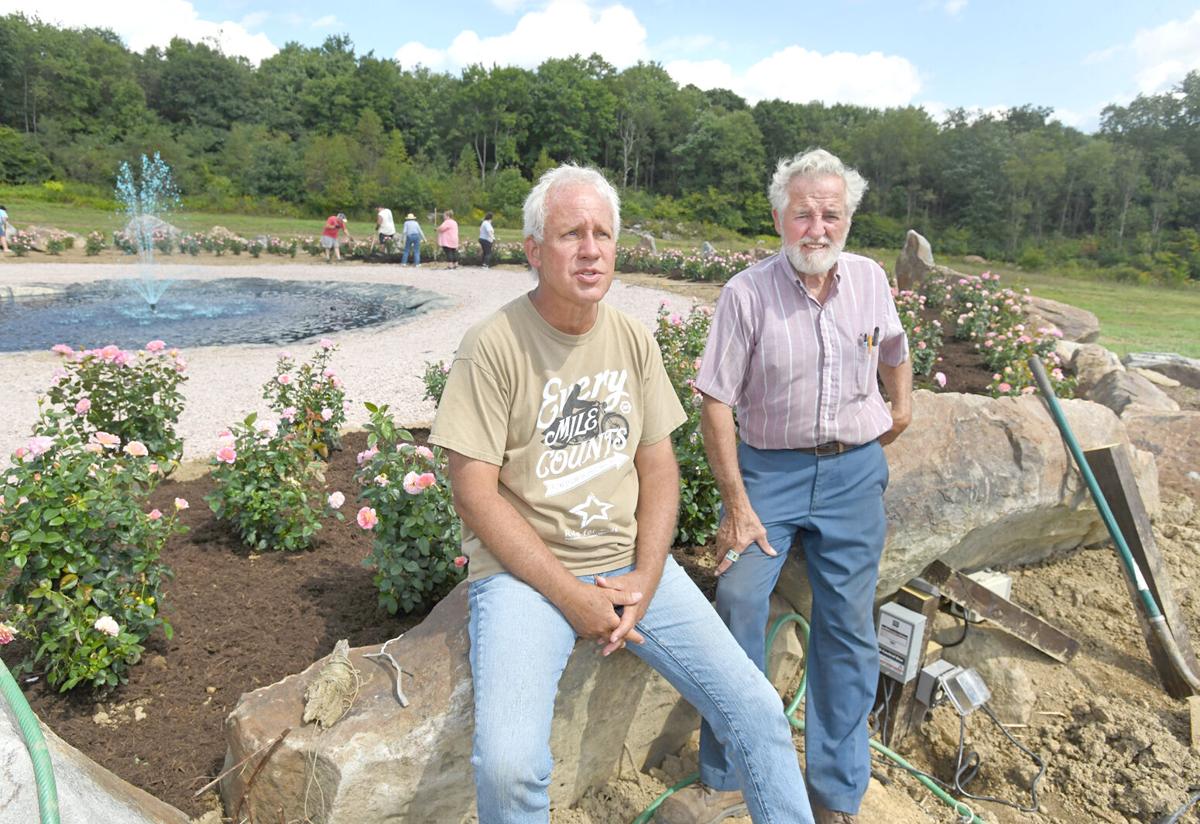 Bill Cenk (left) and Clay Mankamyer are shown Tuesday, Sept. 7, 2021, at the new Remember Me Rose Garden across Route 30 from the Flight 93 National Memorial near Shanksville. Mankamyer, a first responder to the plane crash, is the chairman of the project, and Cenk is the vice chairman. 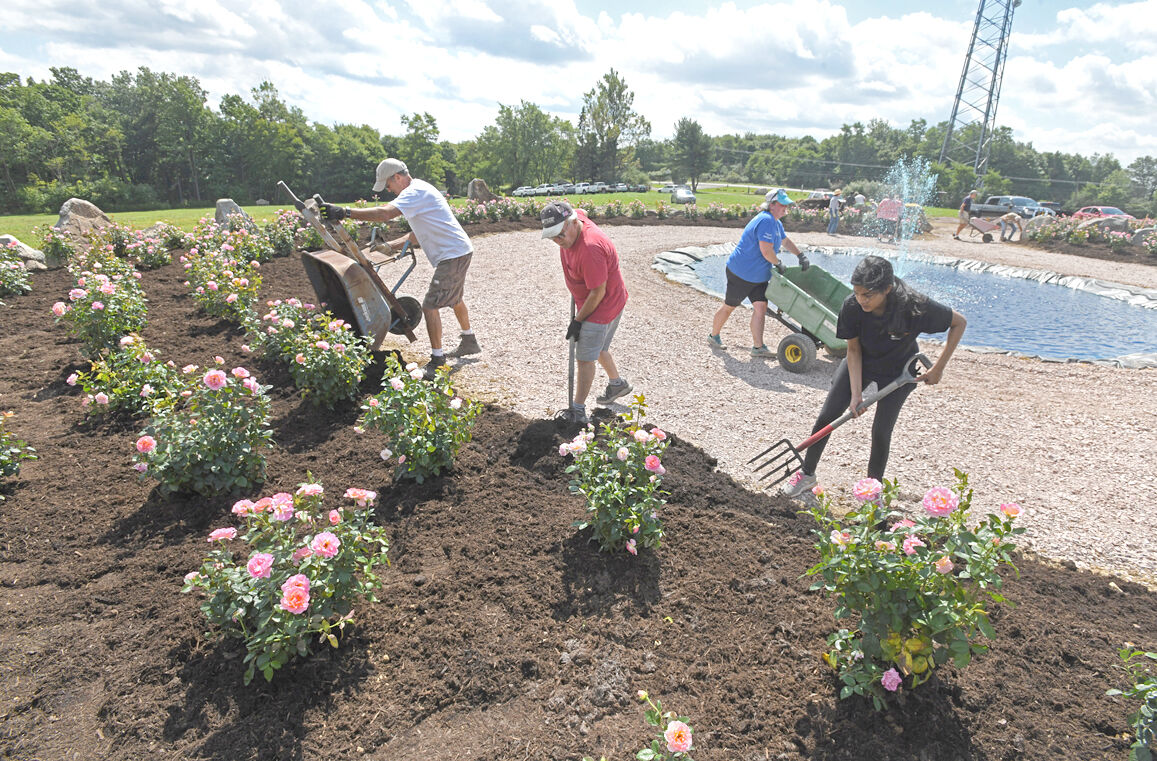 Volunteers work on the Remember Me Rose Garden near the Flight 93 National Memorial in Shanksville on Tuesday, Sept. 7, 2021.

Bill Cenk (left) and Clay Mankamyer are shown Tuesday, Sept. 7, 2021, at the new Remember Me Rose Garden across Route 30 from the Flight 93 National Memorial near Shanksville. Mankamyer, a first responder to the plane crash, is the chairman of the project, and Cenk is the vice chairman.

Volunteers work on the Remember Me Rose Garden near the Flight 93 National Memorial in Shanksville on Tuesday, Sept. 7, 2021.

With the realization that America was under attack, Mankamyer said he folded his hands to pray that night – struggling to quell the anger he felt in the aftermath.

“And as I searched for answers ... I realized there was another way – that something positive had to come of this terrible crash,” Mankamyer said.

Mankamyer’s vision of creating beauty from ashes was in full bloom Tuesday.

Just east of the Flight 93 National Memorial entrance, inside a more than 13-acre site donated to his nonprofit by family members of Flight 93, the Remember Me Rose Garden was coming to life.

Nearly 40 volunteers joined Mankamyer throughout the day to plant a ring of 432 rose bushes inside a garden that doubles as a natural 280-feet-in-diameter compass.

Boulders form the compass, and 93-foot-long rows of smaller rocks carve out its north, south, east and west directional points – a sign for passing planes above that they are crossing into an area where United Airlines Flight 93 fell.

The site is also where brave Americans, including members of the flight crew, decided to fight back, he said.

The property falls within the legislative boundary of the Flight 93 memorial territory, but it isn’t part of the national memorial itself.

Mankamyer said United flight crew members who knew some of the five flight attendants who died that day suggested a rose garden more than a decade ago as an opportunity to remember their colleagues and educate future generations.

“I’m certain people will be able to see this at 20,000 feet (up),” Mankamyer said. “And when planes fly by now, it’ll give crew members a chance to tell people about their heroic acts.”

The property is also home to a 16-foot-tall wooden cross that Mankamyer said became one of the first items placed at the original, makeshift Flight 93 memorial in September 2001.

To Mankamyer, the garden represents a lasting symbol of strength through faith.

But the cross is a 20-year connection to Flight 93, he said. A pastor at his church placed the cross near the crash site to greet grieving family members drawn to the site just weeks after Sept. 11, 2001, to await word on their loved ones’ remains, he said.

The cross anchored the site for years alongside patriotic messages, ball caps and a row of angels – before the permanent memorial was built over the past decade.

“When the new memorial was built, there was no place for (the cross),” Mankamyer said. This was part of the story that they couldn’t really tell. It needed a home – and this land turned out to be the ideal place for it.”

The cross, which now points toward the national memorial, was staked into the ground 15 years ago.

But the rest of the property evolved slowly since.

A circle of teakwood benches was being added around the developed portion of the property’s perimeter this week. A half-mile walking trail curves its way around the site behind those wooden seats.

Plans call for 40 stones – each inscribed with the name of a Flight 93 passenger or crew member – to be placed around the colorful fountain, which was added last week.

“We’ve had so much help,” Cenk said. “Our first volunteer to show up drove three-and-a-half hours to be here.”

Cenk joined five months ago – guided along a trail his late son, Ryan, helped blaze while working on his Eagle Scout project five years ago.

The young man lost his battle with brain cancer in 2017.

Mankamyer said he hopes the garden will serve as a place of healing for decades to come.

“This is a place where you can let everything go – just deflate from all of the feelings about what happened that day,” he said.

Created to serve as a 'living tribute' to the heroes of Flight 93 and a place of healing, founders say.

To learn more or donate: www.remembermerosegarden.com/

'Just the beginning': Patriot Park dedicated near Flight 93 site to honor those who died in war on terror

Nils George Thompson was a Staten Island native who embraced the pastoral life his family gave him when they moved to a Confluence cattle farm in 2000. But when he woke up Sept. 11, 2001, to see his country and his county under attack, he was willing to leave all of it behind to join the fight against terrorism.

United 93, a Hollywood depiction of the events leading up to the Flight 93 crash, is being released to theaters again in select AMC theaters through September 9.

The docu-drama, directed by Paul Greengrass (Bourne Supremacy) was released in April 2006.  Proceeds from sales will go toward the Friends of Flight 93 National Memorial, which works to support the park and the stories of the 40 passengers and crew members.

The nearest locations include: