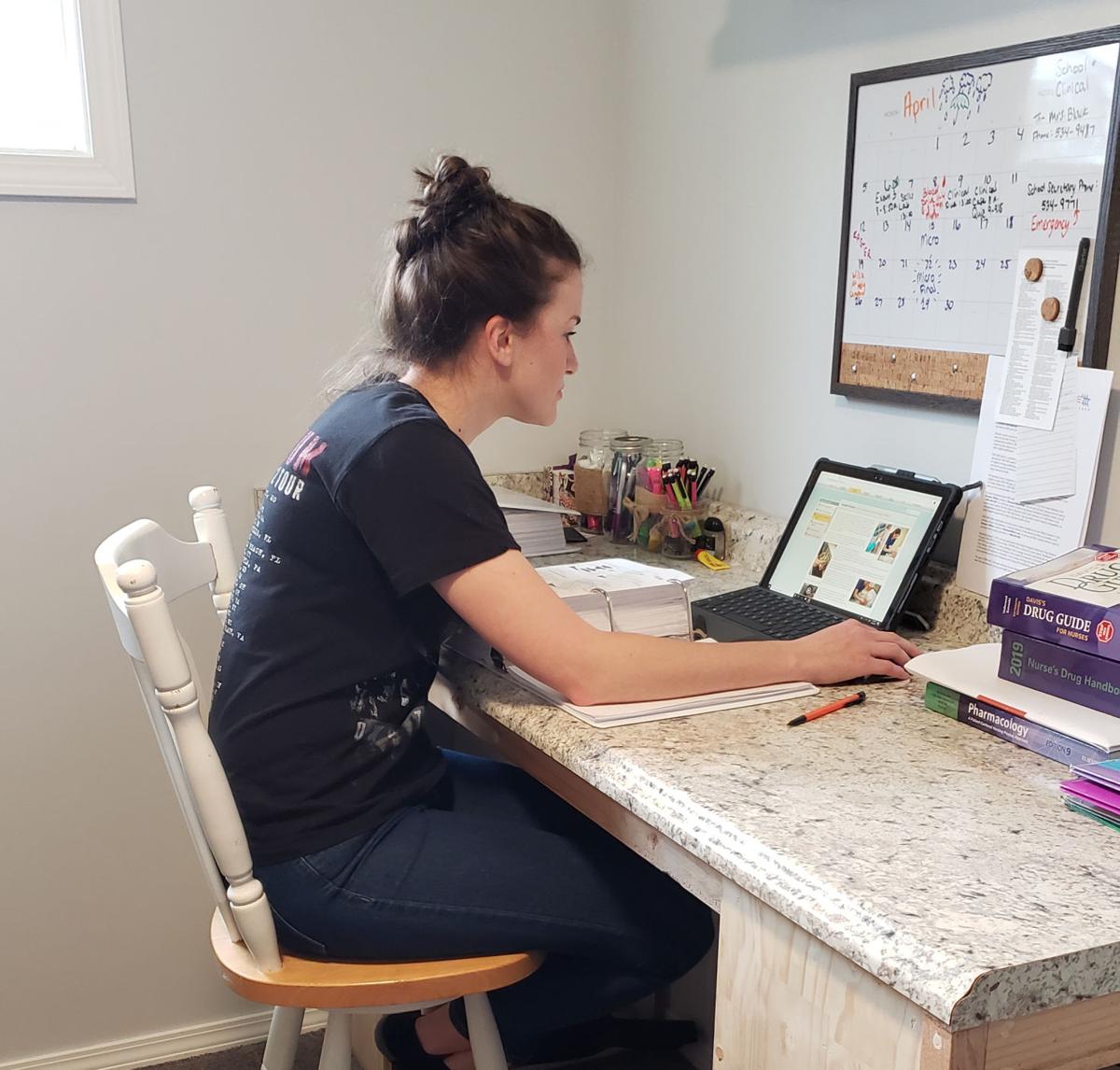 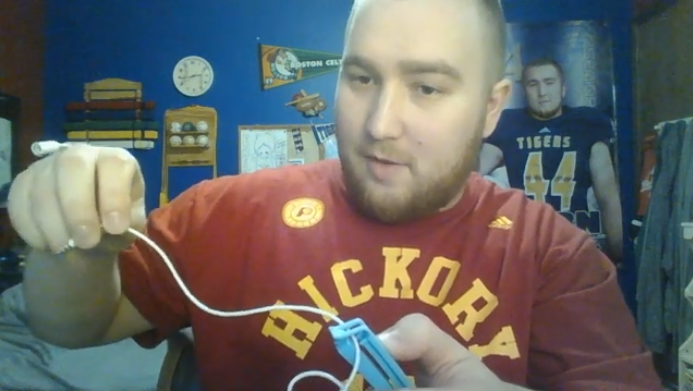 Mount Aloysius nursing student Erik Stern recorded himself demonstrating how to prime an IV using a phone charger in place of the necessary medical equipment. Students in nursing classes around the area have been using innovative ways to continue their education because of the COVID-19 pandemic.

Mount Aloysius nursing student Erik Stern recorded himself demonstrating how to prime an IV using a phone charger in place of the necessary medical equipment. Students in nursing classes around the area have been using innovative ways to continue their education because of the COVID-19 pandemic.

Students and leaders at area nursing programs say they haven't skipped a beat despite the inconvenience of the COVID-19 pandemic, but some innovation was needed.

"There's been a lot of creativity by the faculty," Conemaugh School of Nursing Director Bonnie Mazurak-Riga said.

She said faculty have come up with case studies and simulations that show different patient scenarios. Then, based on these scenarios, the teachers ask questions that make the students use what they've learned in the classroom in real time.

"It really pulls that information into the clinical experience," Mazurak-Riga said.

Conemaugh and several other nursing programs – including at Pitt-Johnstown, Mount Aloysius and St. Francis University – have adjusted to a virtual environment with schools closed.

For some, that includes having students record themselves performing a procedure that's then graded.

Nicole Custer, director of the Mount's nursing program, said one student had to perform an IV check and used a bag of gummy bears and phone charging cord to simulate the situation.

Virtual lessons are taking the place of typical clinical hours that are required of nursing students.

St. Francis nursing program Director Rita Trofino and Pitt-Johnstown Nursing and Health Science Division Chairwoman Janet Grady said their universities were fortunate to have already completed most of the necessary clinical hours before the COVID-19 shutdown.

But in order to replace the rest of the in-person hours, the schools have provided virtual programs from a number of companies that allow simulated clinical experiences.

Faculty at Conemaugh have also embraced "a variety of technology" and have recorded voice-overs for their PowerPoint presentations that are being posted online, which Mazurak-Riga said the students are fond of because they can watch them over and over again.

"If some of the teachers are talking too fast, I can just rewind until I get the notes I need," Conemaugh freshman Tiffany Blair said.

This transition hasn't been much trouble, she explained, because she's still connected to her fellow students and teachers through technology such as the conference app Zoom, which she uses to study with friends.

Blair said the experience isn't the same as being in a classroom, but likes the extra time she has now to study the material.

She also sees the unexpected change as a lesson for her future career.

"This gives us the adaptability that we should have as nurses out in the field," Blair said.

Rachel Brady, a senior at St. Francis, said the adjustment to remote learning was difficult, but said she's thankful for the faculty's dedication and how understanding instructors have been because of the stress this is putting on students.

She added that she believes the adjustment has actually helped her and her peers.

"I feel as though the new learning environment has prepared us to become even more independent and brings to light the changes we may face being in the 'real world' as new nurses," Brady said.

Mount nursing senior Holly Stiffler said she was worried at first that there might be a gap in education because of the transition, but was relieved when she saw how detailed the simulations were.

One setting she described was that of an emergency room with actual background noise where she's responsible for triaging patients and administering medicine.

Stiffler said she thinks the whole situation is "weird" but is confident in her education from the university.

She added that she's never seen better collaboration between the students and faculty to continue the educational tasks.

Connectivity to devices and internet was an issue that needed addressed.

"One of the biggest obstacles was making sure that faculty and students all had the capacity to connect to classes from home, and that faculty could continue to support students from a distance," UPJ's Grady said. "The university has been very supportive of our efforts to make sure students have the equipment they need."

Chromebooks and hotspots have been handed out to students to assist with that connectivity issue at Pitt-Johnstown.

The Mount adopted a similar program of loaning out equipment to help anyone who needed it.

Another challenge of the situation was how to deal with graduation.

All of the directors said the seniors will be graduating on time this year, though that required some more innovation.

Conemaugh students were recently polled by Mazurak-Riga and the majority agreed that a drive-in style ceremony would be acceptable.

Mazurak-Riga said the idea came to her after seeing that recent church services were held at the Silver Drive-in on Scalp Avenue.

Pins and diplomas will be handed out at the previously scheduled date, just in a different venue, she explained.

Pitt-Johnstown hopes to hold a more traditional ceremony later in the summer but for now is taking the virtual route.

University President Jem Spectar will be live on the school's Facebook page on April 25 to provide a "Shout Out to Seniors" and confer degrees.

Mount Aloysius is also planning a virtual pinning ceremony for the nursing seniors there.

Stiffler said she's "bummed" to not be able to participate in a traditional graduation and see her fellow seniors one last time, but is appreciative of what the school is doing.

For the nursing seniors, leaving school will mean heading into pandemic management.

Mazurak-Riga said a number of the seniors in Conemaugh's program have already interviewed and accepted jobs with the hospital, to begin after graduation.

If everything goes as planned with Gov. Tom Wolf's schedule to ease mitigation starting May 8, Mazurak-Riga said the school wants to have students back in a classroom by May 11 and allow them to work in the pandemic atmosphere for a little more than a month.

"It's a hands-on learning environment that will carry them into their professional careers," Mazurak-Riga said.

She said a lot of the students are excited to have the chance to work in the areas of the hospital where they'll be assigned after school, and to learn from medical professionals dealing with the coronavirus.

"I think the students are more scared than they let on, but I don't think they'll back down from the challenge," Custer said.

The senior class at Mount Aloysius is excited to begin their careers and start making a difference, Stiffler said.

There's little concern about the pandemic, she said, especially because the students have had the virus woven into their final classes.

Stiffler explained that part of the clinical adaptation has been implementing how to care for and treat COVID-19 patients.

"It's really nice," Stiffler said. "We have evidence-based information to read and study before we are thrown into it."

Stiffler has accepted a job in an intensive care unit in the Pittsburgh area, but she isn't sure when she'll be able to take her licensing exam.

Some of the tests have been pushed back because the locations were closed due to the virus, according to the Pennsylvania Board of Nursing website.

However, the board is advising students to apply for temporary practice permits, which Stiffler said many nursing graduates already do.

This would allow them to practice in their fields before completing the exam.

Stiffler said she's been told that she might not be able to take the test for up to four months.

As for the rest of the students, school officials said as long as they have satisfactory grades, they will be advancing in the fall.

Area school districts are considering a number of options for how to hold graduation ceremonies while following COVID-19 safety guidelines.