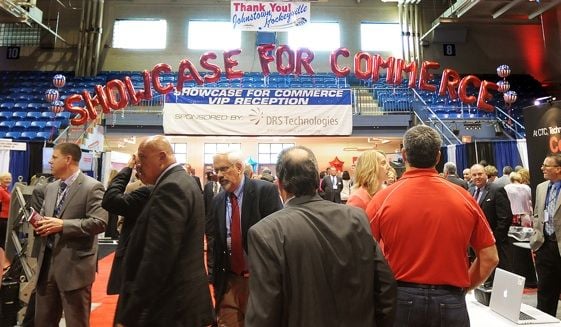 A crowd gathers at the Showcase for Commerce event at Cambria County War Memorial Arena on Thursday, May 28, 2015.

Tony Caper, site lead for DRS Technologies, smiles as he talks about an eight-year, $2.5 billion contract with Space and Naval Warfare Systems Command on Friday at Showcase for Commerce.

A crowd gathers at the Showcase for Commerce event at Cambria County War Memorial Arena on Thursday, May 28, 2015.

Tony Caper, site lead for DRS Technologies, smiles as he talks about an eight-year, $2.5 billion contract with Space and Naval Warfare Systems Command on Friday at Showcase for Commerce.

DRS Technologies took the bulk of that, with an eight-year, $2.5 billion contract with the Space and Naval Warfare Systems Command for production of consolidated afloat networks and enterprise services to enhance operations in tactical situations.

DRS won the contracts during the past six months and already is in the development stages on one. The focus now is on delivering.

“Basically, it’s investing in the workforce we have today. Now, as a prime (contractor) to the Navy, there are a lot of different things that we have to do, so we’re learning as we go.

“Everyone is invested in making this a success. Initially, it’s understand what we have in front of us, make decisions as we go forward.”

The contracts stabilize the defense contractor’s workforce of about 350 local employees, he said.

“What we’re looking for right now is stability of the workforce we have, and then if the opportunity presents itself and we need to hire, we’ll look at that,” Caper said.

All of the manufacturing for the project – to consolidate the Navy’s existing legacy and standalone afloat networks and provide infrastructure for applications, systems and services – will be done in Johnstown, he said.

Caper said he remembers a few years ago, announcing a

$23 million contract with the Navy, a first opportunity for the company as a direct supplier.

Following a motto of the current president – “performance equals opportunity” – helped the company focus on a plan to take advantage of that “foot in the door,” he said.

“The quality has been second to none,” Caper said.

Aside from the multi-billion-dollar contract with the Navy, DRS also won a handful of multi-million-dollar projects:

• $171 million (cumulative value: $384.3 million) with the Naval Undersea Warfare Center for the development, integration and production of technology insertion hardware.

• $48 million with Lockheed Martin Corp. for production hardware and spares for the MK 41 Vertical Launching Systems.

• $15.5 million with the Naval Sea Systems Command for production of the common display system.

The contracts will provide security for the company over the next decade, Caper said, adding that the company just renewed a lease at its Richland Township property for the next 10 years. In the past, DRS has stuck with lease renewals of five years or fewer.

“It’s a true privilege to support the preparedness of our nation’s war fighters,” he said.

Enterprise Ventures Corp., the private arm of Concurrent Technologies, announced a $1.5 million contract to provide spare parts for the carriage, stream, tow and recovery system for the Defense Logistics Agency.

• $6.9 million in contracts to Martin-Baker America, new orders for helicopter seats, spare parts and maintenance for the U.S. Armed Forces and allied countries

Company President Bill Polacek also announced three multi-year government prime contracts worth up to $4.2 million and a blanket purchase agreement with the Army Contracting Command in which the total maximum value of the contract is unlimited.

“It is a celebration of jobs and our national defense,” he said.

“The companies represented here are taking responsibility for the blessings of liberty. All these contracts in one way or another are in furtherance of that goal.

“It’s also a celebration of this region.”

This is the first time Showcase announcements have topped

“It’s absolutely amazing,” she said. “We are so proud of DRS and their team and the work they are doing every day.”

In 25th year, Showcase for Commerce has become 'important event for the nation,' Casey says (with VIDEO)

In this, the milestone 25th year of Showcase for Commerce, participants took the time to reflect upon the past, celebrate the present and envision the future.

Makers ‘inventing the future’ at local event (with VIDEO)

Thursday marked the first day for Williamsport artisan Raffaele Colone to display his handiwork in Johns­town, and within minutes of his arrival to the first Makers Premier, he was networking.

Entrepreneurs 'PITTch' their products at UPJ event (with VIDEO)

Since December 2013, David Luciew has worked to perfect the wrist-support product he developed and patented with his wife, Michele, but he hadn’t asked for funding until Thursday, when he pitched the idea for the first time to “sharks” at the qualifying round of PITTch Fest, an event similar to the reality television show “Shark Tank” that is in its second year.