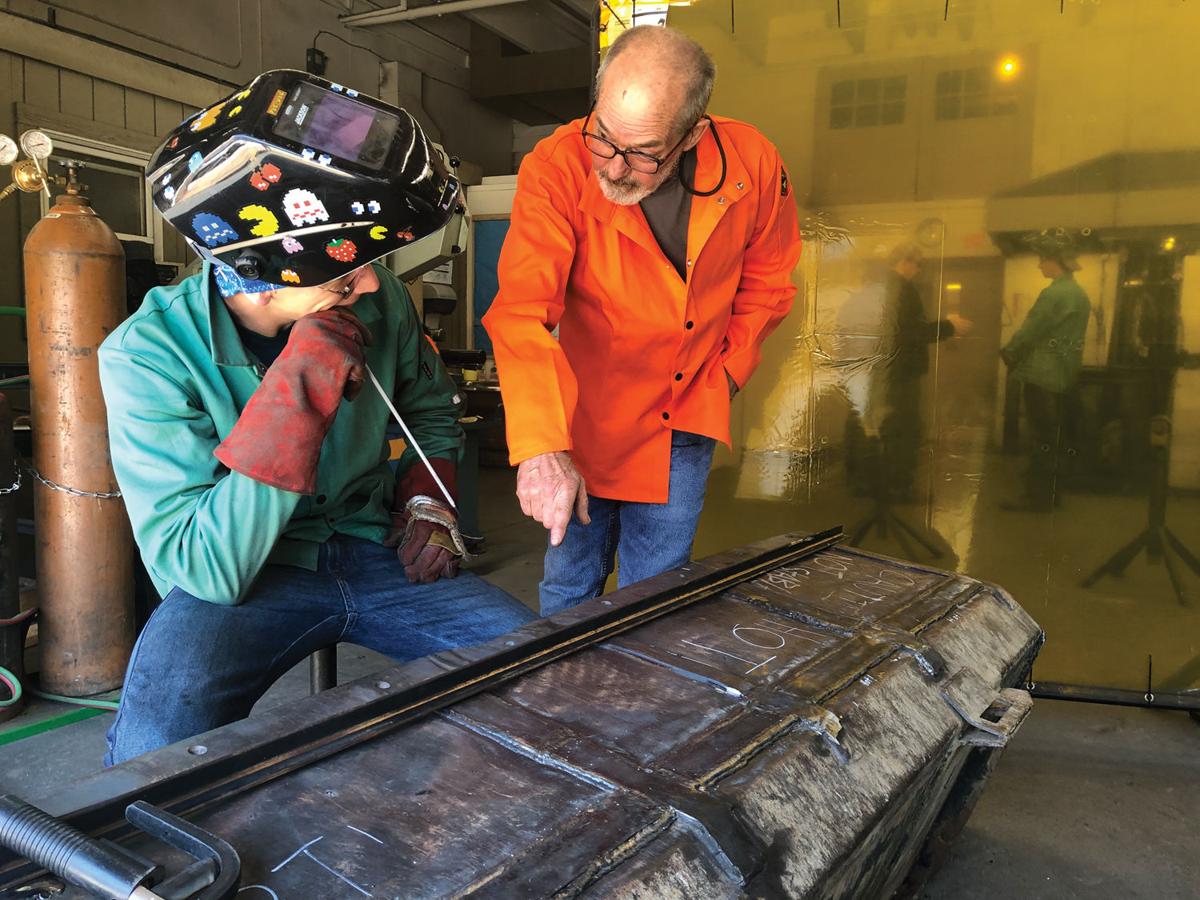 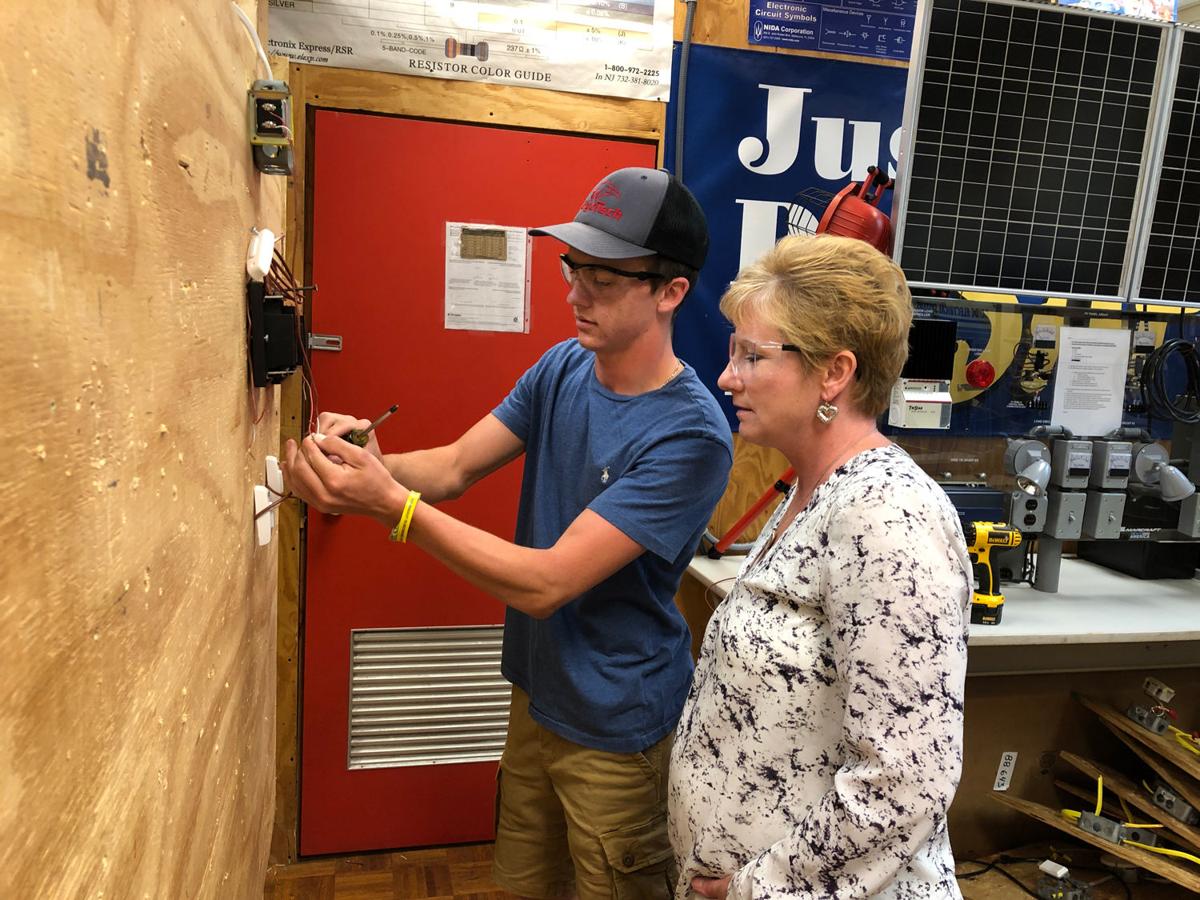 Seth Hull quit college, having lost interest in the field of criminology, and was, by his own account, “skating along, not really doing anything improving my life.”

Veronica Ardary was involved in education, as a classroom aide. The Johnstown resident enjoyed the work, but, but, she explains, “the pay is not the greatest, so I was looking for something that I could earn more money.”

Their decisions led to them to take Johnstown Area Regional Industries-sponsored welding classes.

Ardary, 35, signed up for an eight-week program through the Commonwealth Technical Institute @ Hiram G. Andrews Center and landed a job at Penn Metal Fabricators before ever finishing the schooling. Hull, 22, took a short class at Greater Johnstown Career and Technology Center and then, wanting more education, enrolled in the longer six-month program.

Both said the training not only provides them knowledge needed for a new career, but also the opportunity to do manual labor, which they enjoy.

“Honestly, it was because I love working with my hands,” says Hull, who would like to later use his foundation in welding to possibly pursue a career in certified welding inspecting, metallurgy, or engineering. “It was something that I picked up and was fairly good at off the bat. It's challenging. It's simple. Yet there are the things that you need to do. They matter. There is little required of it, but the requirements are very important.”

Hull and Ardary are part of what educators and local business leaders describe as a rising number of individuals – from high school students getting ready to enter the workforce to middle-aged adults looking for professional changes – pursuing career and technology training.

“We call them 'gold collar jobs' now, the jobs in the trades,” says Debi Balog, JARI's director of workforce development. “More and more people are realizing that the trades are the way to go.”

Balog says encouraging workers to enter the trades is important for the area's potential economic growth.

“It's critical to our area that we invest our time, and our funding and our talent in the trades because, right now, we have a significant shortage of welders, and carpenters, and HVAC individuals, and cement masons and just so many of them,” Balog says. “It's not a secret and it's not anything we haven't talked about, we have an aging population. And a lot of the aging population are leaving occupations that are in the trades primarily.”

GJCTC uses what it calls a 4E approach, emphasizing the aspects of employability, education, entrepreneurial, and enlistment – if a student chooses to enter the military after graduation.

Admiral Peary similarly works to develop well-rounded students who learn more than just the basics of a job, according to executive director Ken Jubas. “We feel that every student who can walk out of here with a skill makes them a productive adult and they can use that skill to potentially move on to have a career,” Jubas says.”Whether you're going to college or whether you're using that as a career, we all need to learn how to change our tires on our car, check the oil. We all need to learn how to fix some leaks in the sink and cook some food.”

Jubas adds: “The most important aspect is we teach job skills – show up on time, do your job, respect other's space, respect other's privacy, be polite. When you're working on a job, these are the same skills that make you employable.”

More than 500 students attend Admiral Peary, located in Ebensburg, coming from eight school districts. Jubas says the vo-tech works closely with those other schools to make sure students, who might be interested in programs, such as masonry, small engine repair, and carpentry, know about opportunities at Admiral Peary.

“We try to have an open communication with all the schools,” Jubas says. “Who better knows students than your teachers? The kids spend five days a week, eight hours a day with teachers. That's more time than they spend with their boyfriend, or their mom and dad or whatever. When they're teaching their kids they know their kids.”

Part of the emphasis of career and technology training, along with apprenticeships, is to develop students' particular skills, while preparing them for jobs that exist in the local communities.

So many businesses foster relationships with local schools.

For instance, JWF Industries, a fabricating company involved in multiple sectors, including defense contracting, sends a workforce development director into schools to provide information about job opportunities. “We did that purposely because, if we do that right, it helps us,” JWF Industries owner Bill Polacek says.

By working closely with schools that provide training, JWF can find students and adults who have interests in particular areas, especially welding, as opposed to hiring individuals with no training and hoping they develop, as was done in the past.

“We're not just hiring welders off the street who never did anything,” Polacek says. “We did that before. It didn't work real well. We want kids who are deliberately going to be a machinist, being a maintenance worker, being in auto body because we have painting as well, or being a welder. Those are the ones that we're going to look for co-ops and training. This is just a stepping stone. It's a stepping stone to start in the trade and, as you're ready, move up through the company.”

Apprenticeships provide individuals the chance to simultaneously work and take classes, resulting in them becoming qualified in trades, such as carpentry and pipe fitting, in a few years.

A key to apprenticeships is the trainee learns the skills needed in a field directly from people working in the profession locally.

“I believe the union crafts, building trades are the highest-quality, best-trained people out there,” Don Arena, president of the Johnstown Building & Construction Trades Council, says. “The budgets are huge, depending on the size of the local union. That dictates the size of the training budget. I'm not certain on every local union, but, in the majority of the local unions, the training is provided by the membership, meaning we're self-funded.”

They also become part of a union.

“What really draws them is the training and the benefits they get on top of working out of a union hall with the pensions, with their health care, with their annuity plan,” says Michael “M.J.” Regan, a representative of the Keystone Mountain Lakes Regional Council of Carpenters Local 423. “They feel like they're part of something then. It is a brotherhood. As they come in, their rights and privileges are just the same as a guy who's been there for 30 years.”

There are about 200 current apprentices in the local carpenter's union.

“Actually, we have so many apprentices we're actually putting an addition on our building right now down in Duncansville to incorporate more classrooms, more training space because with technology coming out we have to change,” Regan says. “Because, if we don't change, the industry is going to blow by us like we're sitting still. The carpenters' union knows the importance of changing with the times and staying up with the technology. That's the bottom line.”

Years ago, career and technical training was sometimes considered – derisively – a path for students who could not cut it in the classroom. And even teenagers who showed genuine interest in those fields were often directed toward the college path instead.

Those times have changed.

“We're focusing on students and adults who are not necessarily college bound,” Balog says. “I think that's where we've made the most success with the career and tech ed. Not everyone is four-year college bound, so we focus on the individuals who want to go directly into employment, maybe through a co-op in high school or go indirectly into employment through a short-term training program. That's where the career and tech centers come in. They provide the opportunities and the training programs that help us make those transitions happen.”

Balog continues: “Over the past 10 years, maybe 10 or 12 years, it's certainly turned the table. At one point, we had a very difficult time getting parents and students, young people to understand that you don't necessarily need a four-year education to live well and get in a career where you have long-term earning potential, you have opportunities for advancement. You don't necessarily need a four-year degree.”

The training has also changed from almost strictly labor to hands-on experience mixed with high-tech and business skills.

U.S. Rep. Glenn “G.T.” Thompson, whose 15th Congressional District covers much of Cambria County, says work still needs to be done to address what he calls the “skills gap.”

“We have people that are looking for jobs,” Thompson says. “We have employers who are offering jobs. But you have the skills gap where the individuals are not qualified and trained to take those jobs.”

By providing that training, Thompson believes students will be put on “pathways to opportunity.”

“When you look at where we're at today, where we have more than 7 million job openings in the U.S., the number one asset of any business – I don't care if it's manufacturing or service industry – is a qualified and trained worker,” the congressman says.

In 2018, the Strengthening Career and Technical Education for the 21st Century Act – legislation sponsored by Thompson, a member of the House Committee on Education and Labor – became law. The bill, which reauthorized the Carl D. Perkins Career and Technical Education Act of 2006, was designed to improve technical education in several ways, including by simplifying requirements states must follow when applying for federal funds, promoting work-based learning, and increasing transparency and accountability.

It passed the House and Senate unanimously on every vote.

“That's a pretty hard task to accomplish today,” Thompson says. “I credit that to the fact that when we wrote this we brought people to the table – students, parents, educators like we have, and faculty administrators at the great career and technical education schools we have in Cambria County, and employers. We brought the people who sign the front of a paycheck, not the back of a paycheck, the ones that are creating jobs, the ones that know what are the positions that are in demand and difficult to fill.”

On the state level, the Pennsylvania General Assembly recently passed an omnibus bill that dealt, in part, with career and technological education issues, such as grants, articulation agreements and tool classifications. “There is a great demand for that. We need to do everything we can for workplace development and to be able to address those needs,” says State Sen. Wayne Langerholc Jr., R-Richland, 35th District, chairman of the Education Committee.