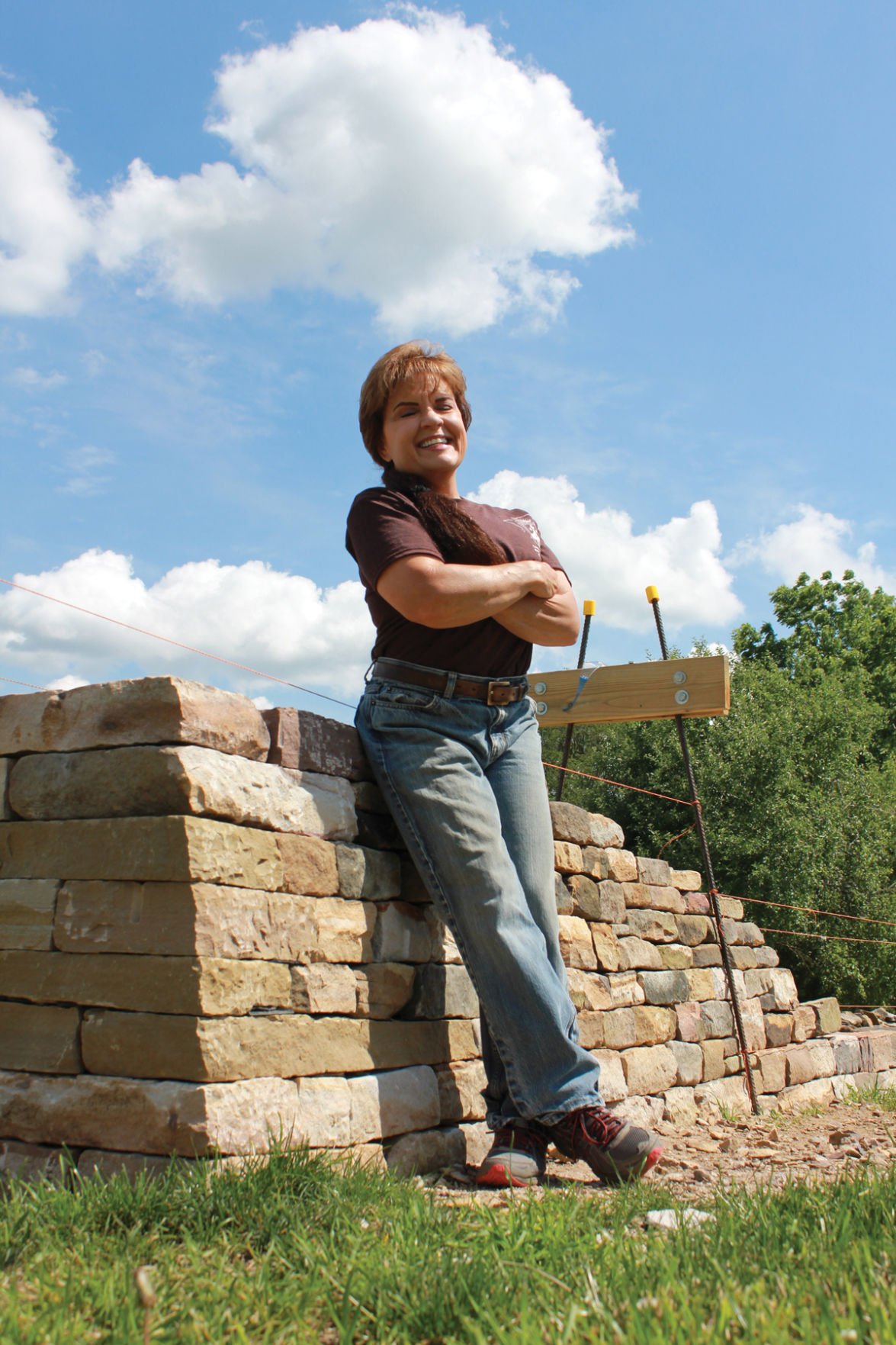 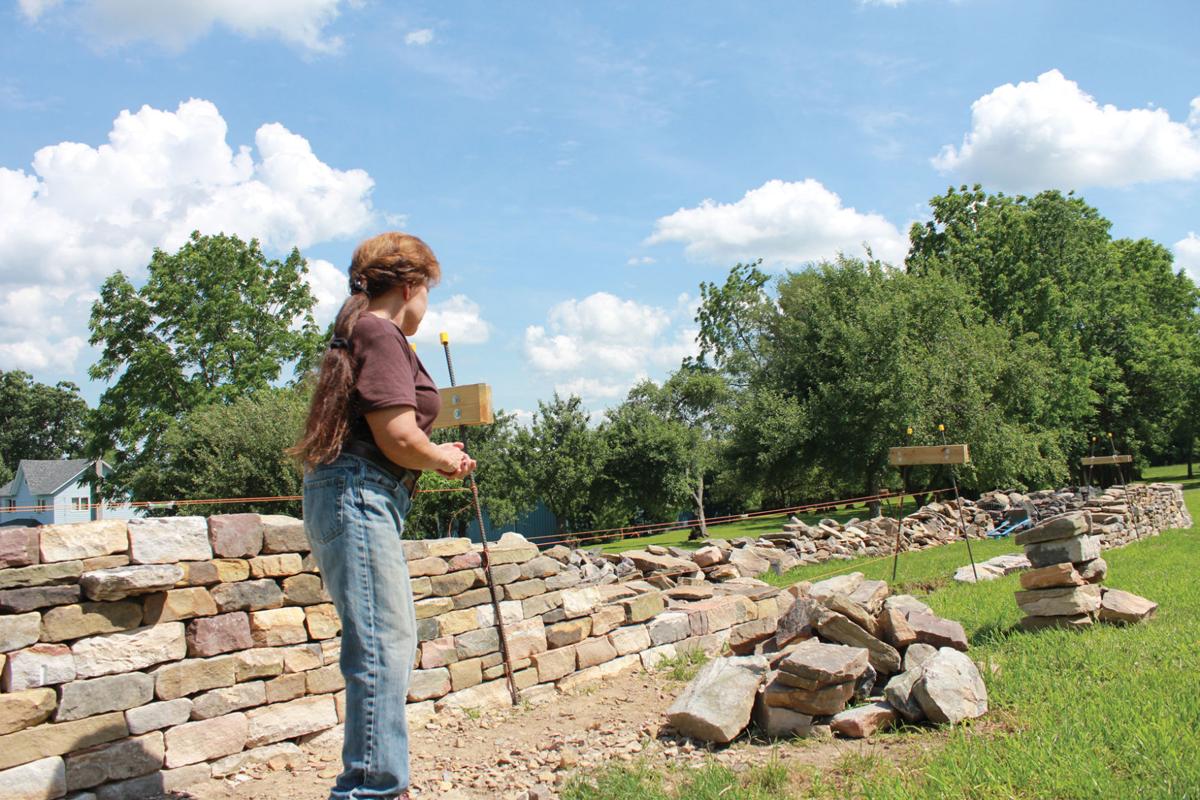 Don’t let her size fool you.

Kim Coggin is only 4’ 7” and weighs just 93 pounds, but in the world of dry stone wallers, the 57-year-old is a rock star. Coggin is on tap to become one of only 15 Advanced Level 3 wallers in North America (as certified by the Dry Stone Walling Association of Great Britain) and the only female among the select group.

Not sure what a dry stone waller is? Historically, a mason is someone who knows and works with mortar. Coggin is not a mason, she’s a waller. “We dry stone wallers are not masons, we specialize in dry stacking stones, a process that relies on friction and gravity only,” she says.

The practice has been in existence for thousands of years and is very popular in the British Isles. Although not as common in the states, Coggin says a good example of dry stone work is the Eliza Iron Furnace in Vintondale. The furnace was built in 1846 and, Coggin says, unlike stone work with mortar, dry stone work will last for hundreds of years. “It flexes with freeze/thaw cycles. As these walls rise and fall with frost heave, they actually get stronger as they settle.

“Drystone construction outlives its competitor by a long shot. If they are built right, they should last at least 200 years.”

There are variations of dry stone walls but the most basic design consists of two sides, known as skins, put together with hearting, small pieces of rock carefully placed between the two skins.

“It's also very important to start with a very solid foundation,” Coggin notes. “When the wall gets about knee high, you place through stones approximately at 3-foot intervals. These stones extend through the wall, connecting the two sides. The purpose of throughs is to prevent the sides from separating and are they are absolutely crucial to building a sound wall structure.

“It's a bit like a puzzle,” she says when describing the placement of the rocks.

Coggin became interested in building with dry stone in 2008. “The kids asked me for Mother's Day what I wanted and I said I needed a load of stone because I needed to do some landscaping.” I saw some pictures of dry stone landscaping and I wanted to try that. So I gave it a shot, but it didn't look like what I saw in the books.

“So, I looked for professional training. The Stone Trust in Vermont offered classes, this was the beginning of my journey,” Coggin recalls. “I got my husband, Jerry, to come along and he loves it too. I wasn’t interested in becoming a certified waller at that time, I was just interested getting my project done. But I fell in love with stone and what you can do with it. I fell in love with the people associated with it too. They are an eclectic bunch.”

Coggin not only got her home project done, she has completed projects all around the area and now is a board member as vice president of The Stone Trust.

Building isn't her favorite part of dry stone walling. She became a certified instructor when she earned her Level 2 certification. “What I love most is to teach and share this knowledge with others,” she says.  “My dream job came about when I received a phone call from Mother Therese from the Carmelite monastery in Fairfield, Adams County, saying that they needed help building their new monastery,” Coggin says. “These cloistered Carmelite nuns are designing their monastery in the manner they were created over 200 years ago and needed someone to teach them this long-lost craft. As teachers, The Stone Trust was involved in building the Carmelites first cottage.

“I have been blessed by going inside the Carmelites cloistered walls to teach and share the craft of dry stone walling,” she continues. “The sisters are in process of building their livestock walls for their animals and the outside walls surrounding their 50-acre monastery.

“They want to be certified Level 2 dry stone masons. My job is to teach and train all of the Carmelites so that they can pass their Level 2 test.

“Think of it, the world’s only certified dry stone walling nuns.”

Certification is not an easy process. The test to move to Advanced Level 3 has two parts. For part A, the student must build two features, requiring about 24 tons of stone, which is slightly more than a triaxle truckload. “If you pass Part A, then you can take Part B, the speed test. For this you must take down a retaining wall (with approximately 12 ton of stone) and put it back together in front of two DSWA examiners within a 7-hour period. This means you actually handle the 12 tons twice, once disassembling and once reassembling the wall.”

The fact that Coggin can move so many heavy rocks in such a short time span, is nothing short of a miracle. “I had rheumatoid arthritis as a child,” she says. “Fortunately, I outgrew it, but it left my joints in pretty bad shape.” She's had both knees replaced and will be getting a new hip this summer. In addition, she will have surgery to fuse her ankle coming up in the future.

Coggin isn't one to walk away from a challenge, however. “Humans are not designed to eat, rest, and be safe and warm all the time,” she says. “It's absolutely necessary for our health and well-being that we experience the weather of the natural world. We need to experience hunger, rather than constantly stuffing ourselves based on want rather than need.”

Coggin follows the practice of earthing or grounding, which refers to contact with the Earth's surface electrons. “As a culture we don't go barefoot anymore,” she says. “We don't touch Mother Earth.

“Take your shoes off and touch the earth at least 30 minutes a day. It's known to help with inflammation, promotes better sleep, and reduces pain – all from walking barefoot outside and touching dirt. It also helps reduce stress and depression.

“I don't wall with gloves, so I can touch stone,” she says.

Coggin and her husband have started a dry stone teaching facility, Laurel Stoneworks, on the outskirts of Johnstown. “We are a branch or satellite school affiliated with The Stone Trust in Vermont,” Coggin says. “It's the first training facility in the state.”

The couple hopes to be able to offer five or six one-day workshops a year.

The Coggins love this area and are happy to show off its features to students, but they are not natives of Johnstown – or even Pennsylvania, as Kim's accent quickly reveals. “We moved here from North Carolina after both of our sons wanted to go to college at UPJ. We fell in love with the place, with the mountains.

“You hear people say there are bad places around Johnstown, but bad place is a relative term, and every place has their bad places. Johnstown has a lot to offer and we love it here.”

To learn more about the Carmelite monastery, go to www.fairfieldcarmelites.org.

For additional information on The Stone Trust of Vermont, go to thestonetrust.org.