Home
Subscribe
Shutterbugs
Events
Advertise with Us
The Tribune-Democrat 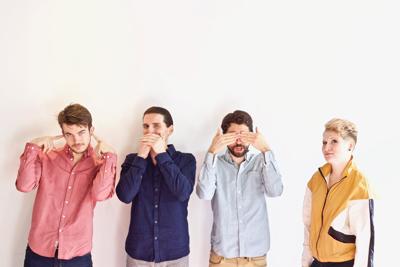 It’s more important than ever to find ways to support local music.

That’s because there seems to be no bands playing local shows for you to check out this summer.

The question on everyone’s mind is why? My first thought, of course: who is making these musicians disappear? Who stands to benefit from knocking out all the local talent? Maybe someone wants to be the only band left in Johnstown – by any means necessary?  While I dug deeper, one thing became clear: Johnstown Magazine still wanted a normal Listen Up! about a local band. So we found a great one!

Chloe Wieczorek, a native of the Salix area, describes her band Hunnycomb as “jazzy-pop nectar for your soul.” That sounds delicious and I want to spread it on my toast.

Unfortunately, the Wikipedia entry for that genre provided no additional examples to compare them to.

I recommend doing what I did – check the band out on Facebook! It’s the easy way to continue to support local artists despite not being able to go to any shows. Search “Hunnycomb music” and find out for yourself why the band's jazzy-pop nectar is so much fun. Their cover of Fleetwood Mac’s Dreams is a great introduction to their smooth sounds. Be absolutely positive to like their page while you’re there.

Hunnycomb bandmates are Wieczorek on vocals and keys, Kevin Lynch on drums, Bryce Rabideau on guitar, and Jonah Petrelli on bass. According to Wieczorek, most of the band happened to meet separately in her home on different days, brought together by various roommates and fate.

So which of the four is behind the mysterious disappearances of all the local Johnstown musicians? Hunnycomb hasn’t disappeared (they are all just staying at home for some reason??) so clearly one or all of them must be involved somehow. I was determined to find out more.

While you’re checking out Hunnycomb’s videos, I’m sure you’ll agree that their video quality is unbelievable. Their videographer and friend, Sam Suter, creates a cozy intimate feeling that perfectly compliments the jazzy-nectar tones. Wieczorek’s younger cousin, Stoker Wieczorek, provided the drone shots for their cover of Robyn’s Dancing on My Own. “Turns out our friends and family are pretty talented,” Chloe says.      I thought that was a really nice thing for her to say, but I had to stay focused. I was talking to a possible criminal, suspected (by me) of making musicians disappear. I couldn’t let it slip to her that I used to play guitar – else I may risk my very life.

The whole band is very excited about their newest music video, Wait & See, which they hope to release later this month. They shot the video at This Is Red in Homestead and The Manor Theater in Squirrel Hill, and were able to get even more incredible talent involved in the video production. Emman Pharrow is the videographer, Aisya Washington is the stylist and Joshua Orange choreographed the dance. Beyond that, actors, dancers, and personal trainers were all involved in bringing it to life.

“This video will highlight what we’re all about. It’s fun, queer, silly, and sassy,” Wieczorek says.

The band's older music videos already looked so good, but they were determined to go bigger. This video probably cost a lot of money and resources.

My hands began to tremble as I put two and two together. No one playing live music shows, missing musicians all over Johnstown, and this band puts out a bigger production than ever before? Who has the kind of money to, not only pay for a music video this big, but to take out all the competing musicians in the city?     It was now clear to me that this went all the way to the top. Someone in the mayor’s office – maybe the mayor himself – is paying to make Johnstown musicians disappear to ensure the success of Hunnycomb’s new video Wait & See. (Which you should still totally check out on YouTube; it’s a delight)

I just can’t think of any other reason no one wants to play music in jam-packed venues full of people standing shoulder-to-shoulder right now.

Spreading jazzy-pop nectar in the region