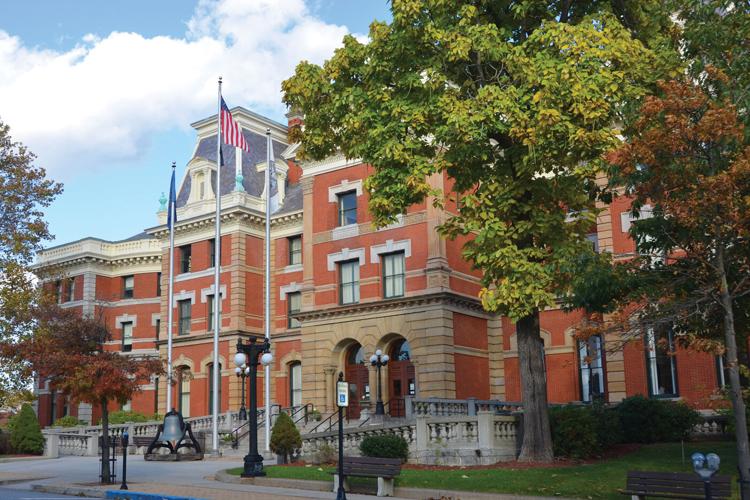 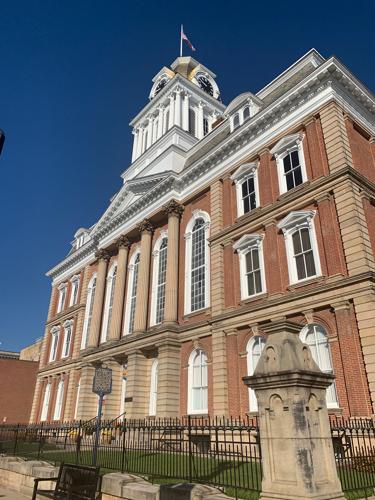 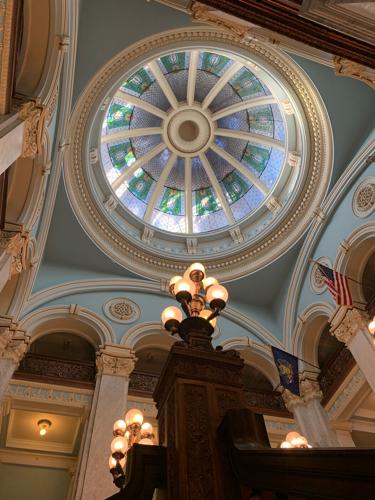 justice. They are the county courthouses of Western Pennsylvania.

Their towering structures were meant to impress upon those entering the seriousness of the events that took place inside. Many of these buildings are approaching their sesquicentennial anniversaries of service.

When they were built, they represented the successful future of their counties. Now that that future has come to pass, they represent a time when life was considered simpler and more elegant.

It is the second courthouse, though, that has an interesting story connected to it.

However, a meeting in the Cambria County Courthouse in 1846 set the country on another path, and, surprisingly, it was a Democrat who brought about the upset election of Taylor.

T. C. McDowell was a member of the Cambria County Guards who were preparing to fight in the Mexican-American War. When the guards met in the courthouse in Ebensburg to elect a lieutenant, they chose C. H. Heyer over McDowell.

Miffed, McDowell eventually left the guards to run for governor against a Whig candidate. Because of the way McDowell had left the guards, the soldiers voted heavily against him, giving the governorship and a one-vote majority in the state senate to the Whigs. This created just enough of a political wave for Taylor to win Pennsylvania and give him enough electoral votes to win the presidency.

“It sounds fantastic to say that Taylor’s victory resulted from a minor incident that occurred in the Cambria County Courthouse at Ebensburg. But it isn’t,” the Johnstown Tribune-Democrat reported in 1954.

Another story involving the second courthouse is that it was partially demolished so that material from the courthouse could be used to construct an armory. When this was done, two men went onto the grounds searching for the courthouse cornerstone, believing a bottle of whiskey had been placed in the stone decades earlier.

“The stone, when brought to view, was found to be mearly (sic) a square block of granite about two feet on the base and one foot in depth. In the centre, was drilled a hole an inch in diameter and a couple of inches deep, and inside this hole was found two ten cent pieces of the date 1814. Not historical documents nor anything else – not even the coveted bottle of whiskey – presented themselves to furnish substance for story or song,” the Cambria Freeman reported in 1882.

The current courthouse has been renovated twice over the years, the most recent completed in 1995.

Courtroom 1 is one of the largest in the country, with seating for 500. Portraits of county judges adorn courtroom walls and two mural, painted in the 1930s, are featured in an upstairs hallway. Painted during the Great Depression under the Federal Works Progress Administration, they are titled Justice and Knowledge.

The courthouse was added to the National Register of Historic Places in 1980.

Upgrades are planned for 2022.

The Blair County Courthouse in Hollidaysburg was built of stone in 1875-1876. It is a Gothic Revival-style building constructed in a “T” shape. The two-story building has a three-story tower on either side of the entrance. It also has a five-story clock tower topped by a tall stone spire.

Michael Farrow, with the Blair County Historical Society, says a famous trial took place in the courthouse in the 1920s. “It was a ‘Bonnie & Clyde’ type story where the husband robbed an Altoona Bank and his wife helped him escape from the scene,” Farrow says.

The couple were eventually captured, but the husband, Frank Hohl, escaped from the county jail and continued his crime spree until police in Ohio gunned him down.

The Blair County Courthouse was added to theNational Register of Historic Places in 1976.

The Somerset County Courthouse in Somerset was built 1904-1906 in the Classical Revival style. The walls are limestone and the roof is made of terra cotta tile.

The central tower has a copper dome.

“The old brick courthouse wasn’t large enough, but people protested building a new building,” says Mark Ware with the Somerset County Historical Society. “They printed up buttons saying ‘The old courthouse is good enough for me.’”

The courthouse cost nearly a $250,000 to build. It is a beautiful building that has over the years nearly lost its interior marble, central stairway and copper dome because of other government agencies finding some problem with them.

Attorney George Kauffman says there was a rumor during Prohibition that the county judge was “dry” and the district attorney was “wet,” meaning the judge supported the national prohibition on alcohol, but the DA didn’t. This led to differences of opinion on how bootleggers and their moonshine should be treated.

“They said the moonshine was carried in on the first floor and out through the basement,” Kauffman says.

He also tells the story of how there used to be a bullet hole in the courtroom’s wall.

A judge who used to carry a pistol decided he wanted to get an annoying bird out of his courtroom. He pulled his pistol and started shooting at it. Kauffman doesn’t know whether the judge had actually hit the bird, but the hole has since been covered over with paneling.

The courthouse done was recently repaired.

The building was added to the National Register of Historic Places in 1980.

The Westmoreland County Courthouse in Greensburg was built in 1906 in the Beaux arts style. It is the county’s fourth courthouse.

At 175 feet tall, the building is still one of the tallest in Greensburg.

Anita Zanke, with the Westmoreland Historical Society, says some people count the building as the fifth courthouse in the county because they include Hanna’s Tavern at historic Hanna’s Town, which was the first English court west of the mountains.

As for notorious trials in the courthouse, Zanke says, “I recall the ‘Kill for Thrill’ trial for Michael Travaglia and John Lesko that took place there in the 1980s. In the winter of 1979-80, these two men (charges were later dropped against a 15-year-old who testified against them) went on a killing spree, four people killed over eight days in Westmoreland and Indiana counties, including a 21-year-old police officer.”

The courthouse was added to the National Register of Historic Places in 1978.

Indiana County currently has two courthouses. The one constructed in 1970 operates as the courthouse, but the Old Indiana County Courthouse is the historic building that fits with the other county courthouses in the surrounding counties.

The old courthouse was built 1869-1870 in the Second Empire Italianate style. The cost was $150,000. The four-face clock tower cupola is covered in gold leaf and once took 15 minutes to wind, which had to be done weekly.

James G. Allison was the first man hanged at the courthouse on Feb. 17, 1882. He was convicted of murdering his father.

“It is an interesting trial because it seems that an innocent man was sent to the gallows,” Allen Fiechuk, a volunteer with the Historical and Genealogical Society of Indiana County, says.

On the evening of June 18, 1880, Robert Allison was out in the dark. He heard someone call to him. Believing it was his son, James, Robert approached the man, only to be shot. Just before Robert died, he told his nephew that “Jim Allison has shot me.”

James was arrested the following day, and a revolver was found in the leg of one of his boots. He denied having shot his father. The case was tried at the courthouse in March 1881, and the jury found James guilty of murder.

James appealed the case, which was denied, and he was sentenced to death. Years later, James’ mother, Mary Allison, confessed to the murder, saying that she had dressed in James’ clothing and shot her husband.

“If this confession is true, the first hanging in Indiana County was a terrible mistake,” Fiechuk says.

The old courthouse was listed on the National Register of Historic Places in 1974.

The Bedford County Courthouse in Bedford was built from brick and Italian marble in the Federalist style 1828-1829. It may be the oldest courthouse in Pennsylvania that is still being used as a courthouse. However, this is a disputed claim. Centre County claims its courthouse, which was built in 1805, is the state’s oldest still-operating courthouse. Perry County’s courthouse, built in 1826, is also older.

The Tribune-Democrat offered one explanation from the Pioneer Historical Society for Bedford County’s claim. The Bedford County courthouse is the “only one in its original state, with no additions to the 1828 structure. Courthouses in Perry and Centre counties both have additions.”

Because of its age, it also presents some inconveniences to those who work in it.

“There’s not another judicial district in the commonwealth were the judge does not have permanent chambers in the courthouse,” then-President Judge Daniel Howsare told The Tribune Democrat in 2000.

It is the only courthouse in the area that is not included on the National Register of Historic Places.