You have permission to edit this article.
Edit
Home
Subscribe
Shutterbugs
Events
Best of Johnstown
One the Beat with Archie
Advertise with Us
The Tribune-Democrat
1 of 5 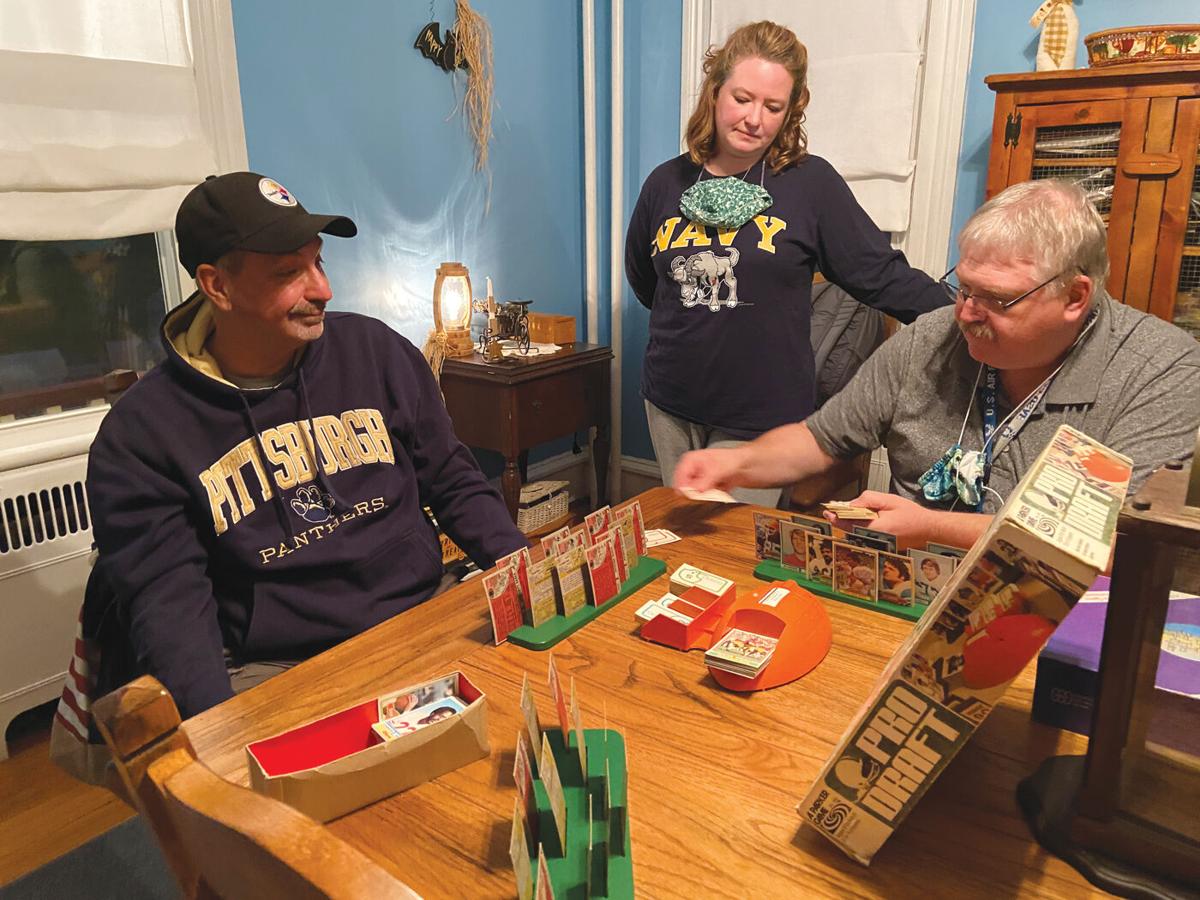 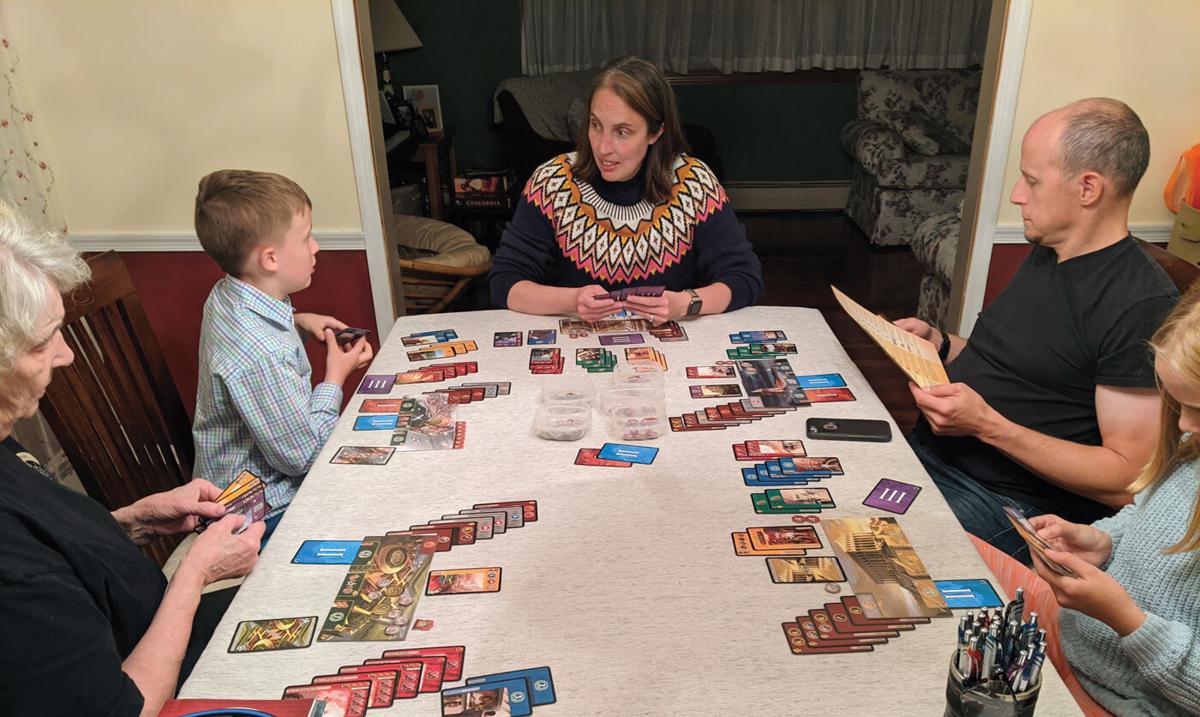 The Chris and Nalene Hilker family 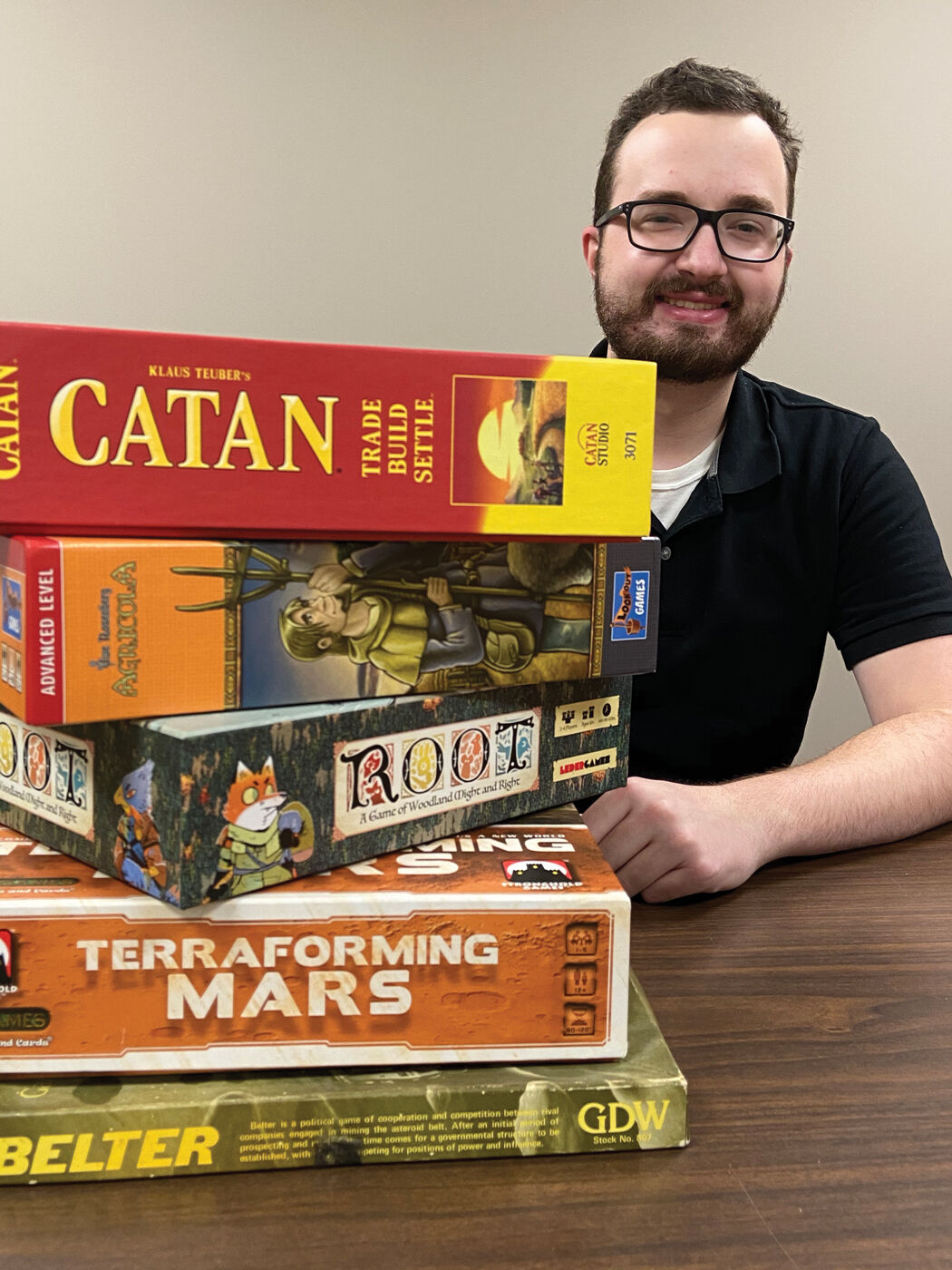 Nathan Madison has always been interested in board games. 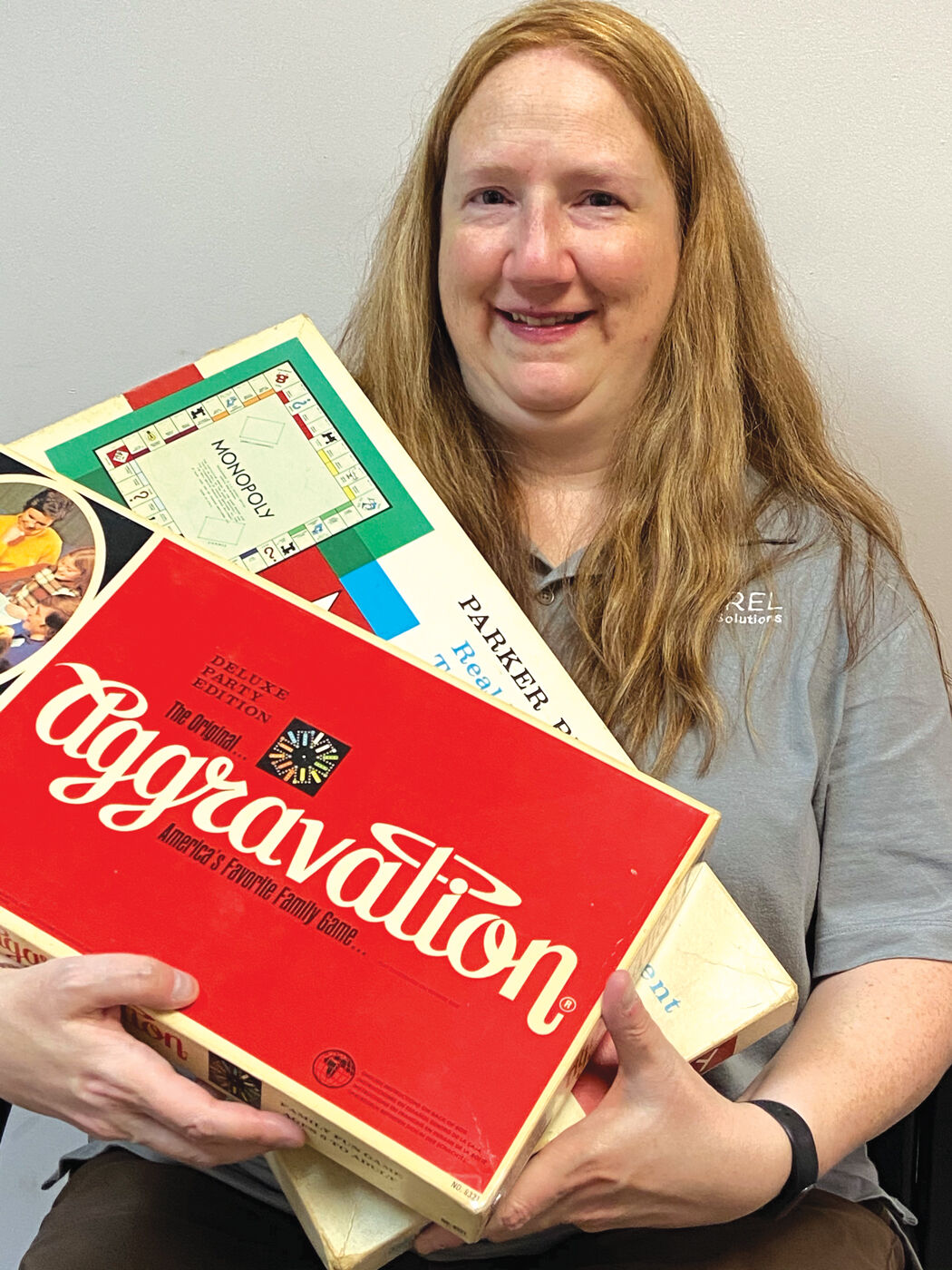 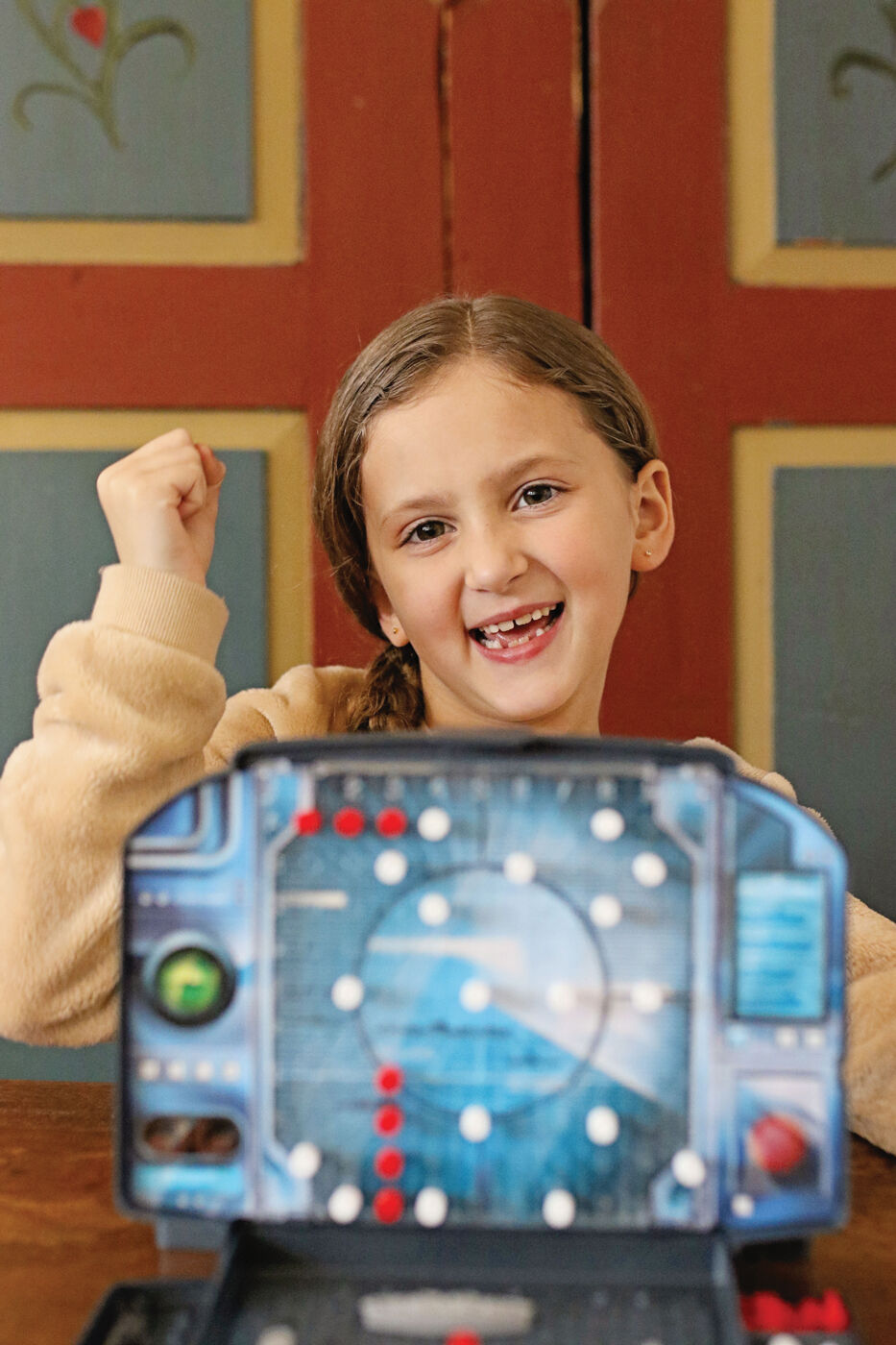 To pass the time during the many months of isolation due to COVID-19, leisurely hobbies that were once viewed as old fashioned are seeing new life. Just take a minute to scroll on social media and you’ll see pictures of a needlepoint project or a completed puzzle with proud exclamations of: “So I did a thing!”

This past year has ignited a passion for restful fun; and while locked away, many have turned to board games. They dragged out the vintage games of their youth or learned new ones to share with family and friends.

What is Old is New Again

Crystal Custer-Dull and her brothers, Ken and Kevin Custer, have been avid board-game players, especially when they were children. Ruminating on their time playing together, the trio talked about long summer days where the boys played baseball in the morning at Oakhurst Playground on Harold Avenue in the West End where they lived, then came home in the afternoon with their friends to play a game on their front porch, cooling off from the hot summer sun.

When they were not playing with friends, family members still played, picking from an assortment of games in their house.

“We always got games for Christmas,” says Crystal, a seventh-grade teacher in the Greater Johnstown School District.

“My mom had a stand in the attic. They were easy to get to and there were stacks of them.”

While Crystal is the youngest of the three, her fond memories of moving pieces across the game board made lasting memories.

“We played everything – Life, Monopoly, Uno. The value of figuring things out and using the money really taught you to critically think and use math skills.”

Crystal’s brother Kevin, a turnpike construction inspector, remembers those days fondly and says the pandemic is a chance to be with neighbors while remaining socially distant.

“It’s so much of a chance to be with your neighbors in a safe way,” Kevin says. “The bonding is a tremendous way of building community in the midst of trying to figure out how to win the game.”

Ken, the oldest of the trio, remembers his favorite game, Pro Draft, which he received as a Christmas gift in the early 1970s when he was 9. He says it taught him life-long lessons.

The game, which can be compared to Fantasy Football leagues, gave players a set of official football trading cards with statistical information. Then, each player drafted and traded cards, building a team over the course of the game.

“The game came out right when the (Pittsburgh) Steelers were winning,” says Ken, a pastor at Grace United Methodist Cole Center in Washington County.

He says the game came with 50 cards, but the great thing about it was that he could add his own playing cards.

“I loved being able to go to the store and use my spare money to get a pack of cards and find out if I got any Steelers and see if I got any Joe Greene, Terry Bradshaw, Lynn Swann, Jack Ham. It would be a great thing.”

Ken and Kevin were admittedly big sports kids at the time. They still are. And they loved collecting playing cards. “As a collector, the game was a big bonus,” Ken says.

“It didn’t matter if, in real life, the player was a hall of famer, in this game, they might not be very good,” says Ken, who still lives in Oakhurst. “The game had separate rules and I appreciated the ways how you could make trades. You were like your own general manager.”

Kevin, equally excited about sports, admitted another reason for playing Pro Draft: “I was quite a bit younger than Ken. I liked just being with my brother.”

Connecting to the Past

People play games for all sorts of reasons. It can be for passing the time or a competitive streak. Some say they like the challenge of figuring out the rules and others like the fantasy built around a particular board game.

For Tammi Yeckley of Armagh, it is a connection to both of her grandmothers, now deceased. Playing games forged memorable relationships that run deep.

“I think I drove my gram nuts playing Monopoly, because I wanted to play it all of the time,” says Tammi, who works at Laurel Medical in Richland Township. “Grandma Berkey liked Racko and Skip-po and Uno, too.”

Tammi says she was an only child until she was older, so it was just her and her Grandmother Berkey who played while her grandfather worked. She remembers playing games, especially Monopoly in the evening between favorite television shows The Love Boat and Fantasy Island.

“With my other grandmother, we would play Aggravation,” says Tammi, referring to her Grandmother Sharvaugh. “When she passed, my uncle, her brother, was still living in the house, and he had made sure I got the game,” Tammi says, laughing. Looking back, she believes her Grandmother Sharvaugh kept her busy playing board games to keep her out of the candy jar.

“She always had Hershey Kisses on the buffet in her dining room.”

Tammi says that having the memories of both her grandmothers is a blessing, and it is especially heartwarming to have the actual games they played together.

She encourages people to not take such times for granted.

“Cherish what you have, because they are not going to be around forever,” she says.

Board games have come a long way since The Game of Life first appeared in 1860. The popular Milton Bradley game replicates a person’s life, through college, marriage, even having children. Now, games simulate future situations, go into a fantasy realm, or replicate models of empire building.

Nathan Madison, a 24-year-old multi-media specialist with Visit Johns-town, has frequently plunged into these often magnificent and in-depth multi-player games that get his friends to think beyond the now and instead, think “what if.”

“I have always been interested in board games,” says Nathan, of Summerhill, “but it’s only been about a year and a half since I have been collecting them on Amazon.” The more complex the rules, the better, he says.

Nathan first started noticing large scale Euro-style games, or games with intellectual components (as opposed to games of chance) on YouTube, an online video sharing platform. There, he saw a zombie-themed board game that looked interesting and he scrolled on to see what it was about. From that moment on, he started purchasing games that interested him. For any games he has, he keeps a log on the Internet site, BoardGameGeek.

“I try to get around to playing all that I buy,” he says. “I keep my collection up to date on there.” He uses his friends to test out his purchases and explore which games are fun and which are not.

“Once a week, we have a game night, but it has been tough with the pandemic,” he says. “We have a core group that people filter in and out of each week and if there is ever a social situation where I can bring a board game, I will do that.” Nathan says he has a rotating system where he and his friends pick games to play each week.

“The games themselves are pretty great. Board games are looking better than ever and coming from like your standard Monopoly to some of the games that I have, they look great and play great, but the main thing is the social aspect.” Nathan says that the interaction between the players and friends is what he looks forward to.

“Whenever you do something that affects everyone at the table and they all go crazy it’s just a great feeling.”

Nathan recommends several games for newcomers or even those who have played before and are looking for something different to add to their gaming repertoire.

Catan, a resource management game, involves player interaction with trading and gaining resources. Nathan says it is not too complex, but it is hard enough if players want to move up to Terraforming Mars.

“I find games that I like are near-future games,” Nathan says. “Terraforming Mars is about life that has moved beyond Earth and we are moving to Mars, and these big corporations are fighting to reap the rewards – to terraform Mars.”

The overall end game is to make the planet habitable with very limited player interaction.

“It is like a brain teaser,” he says. “You have to manage your money, resources and your cards.”

Next on Nathan’s list is Agricola, another resource management game where a player becomes a subsistence farmer in Germany, managing crops. Agricola is a Worker Placement Game, which means players put a game piece down on a card and receive whatever is listed on it. The game also is categorized as a Euro Game, where there is little player interaction during play.

Root is a game that Nathan likes because of its whimsical nature.

“I bought Root because I really love the art and games can look really great and be really great,” he says. The game features different factions of woodland creatures trying to reclaim the forest after cats took it over. “It’s unique because every player gets different unique abilities.”

Nathan also collects older games such as Belter, which he found at an antique shop.

“It just looked so old and archaic and there was something about it that I couldn’t leave it there,” Nathan says of the game.

“I brought it to the table for my friends to try it. I would compare it to doing taxes.” He says that it was interesting to compare Belter to the games of today and how far they have come. Belter was all pen and paper, whereas newer ones have all the bells and whistles.

Nathan encourages people to go ahead and try a few of the games. While he and his friends also are into video gaming, one of the things that drove him to try board games was that he was experiencing a rut with gaming.

“I think the best way to do it is to throw a board game out on the table and teach the rules and run with it,” he says. “Most people will respond in a way that’s like, ‘oh, wow, I want to keep playing this,’ and it’s also pretty affordable.”