You are the owner of this article.
Edit Article Add New Article
You have permission to edit this article.
Edit
Home
Subscribe
Shutterbugs
Events
Best of Johnstown
One the Beat with Archie
Advertise with Us
The Tribune-Democrat 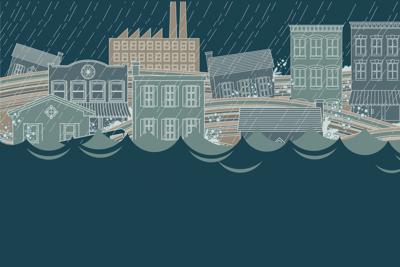 On March 17, 1936, Johnstown was once again flooded when water from melting snow and several days of relentless rain rose to more than 14 feet in some areas. It is estimated that 25 people died, nearly 3,000 structures were damaged and 77 destroyed. Property damages were set at $41 million.

This year marks the 85th anniversary of that St. Patrick’s Day flood.

The disaster became the impetus for a major federal support plan for Johnstown. According to Johnstown Area Heritage Association’s website (jaha.org), “Works Progress Administration mustered every available man in a four-county area to provide assistance – some 7,000 men and 350 trucks were set to the task of digging out the town. After the flood wreckage had been cleared, long-term public works programs began, such as replacing sidewalks, roads and bridges.”

But, the website notes, Johnstowners thought more should be done and sent 15,000 letters to President Franklin D. Roosevelt asking for help.

The President responded by paying a visit to the city on Aug. 13, of that same year.

“My first thought in coming to Johnstown … is to bear a simple word of thanks, of gratitude to you good people who showed such heroic courage last March when you found yourselves in dire peril,” Roosevelt said in his speech before a crowd of 10,000 people.

“You have shown the finest qualities of good American citizens, and the whole country is grateful to you for the way you faced those dangers of that time.

“We want to keep you, as far as we can, from having to face that situation in the days to come. The Federal Government, I need not assure you, so long as I have anything to do with it, is going to cooperate with your communities and with your state in taking every possible measure to prevent floods in the future.”

The President authorized the U.S. Army Corps of Engineers to construct channels along the rivers through town, at a cost of $8.7 million. The Local Flood Protection Program  increased the capacity of the rivers in an effort to prevent future flooding. 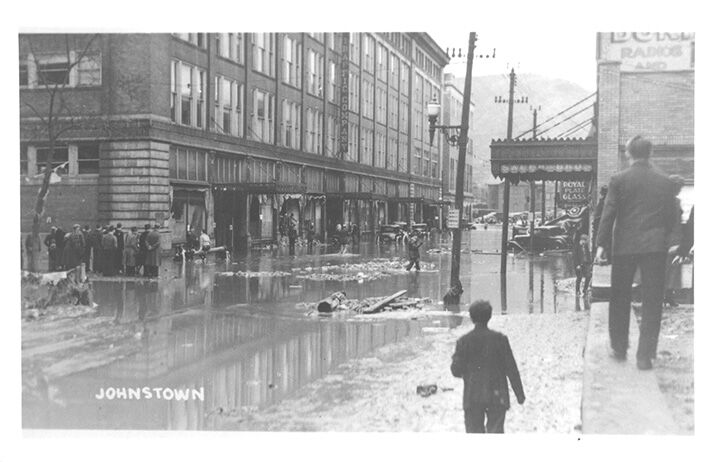 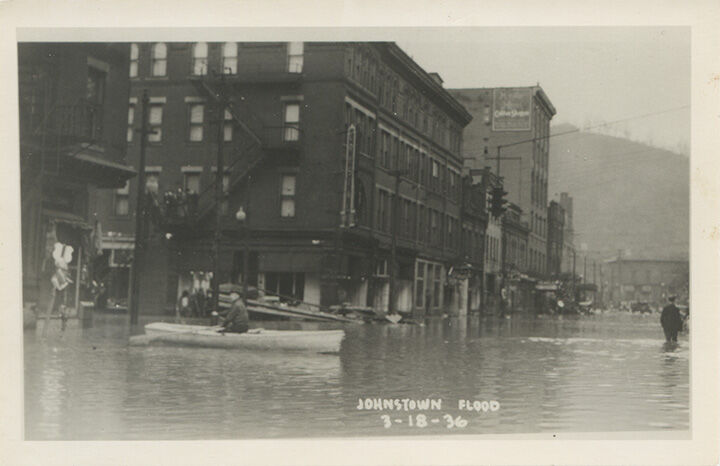 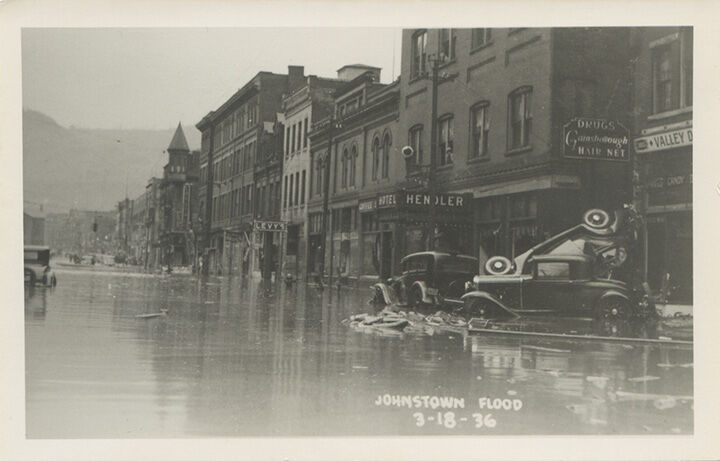 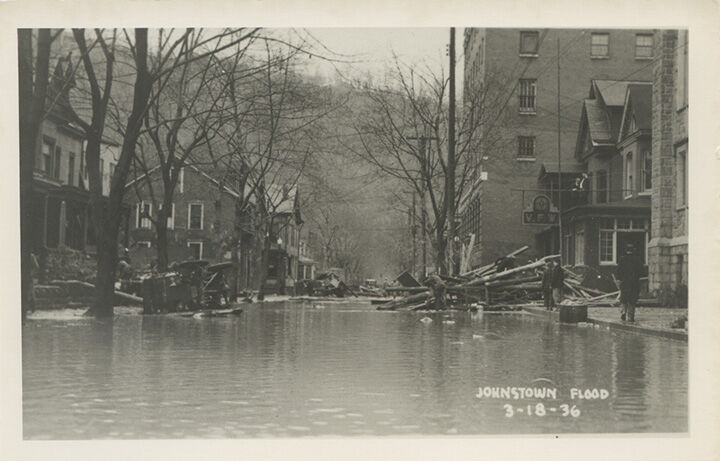 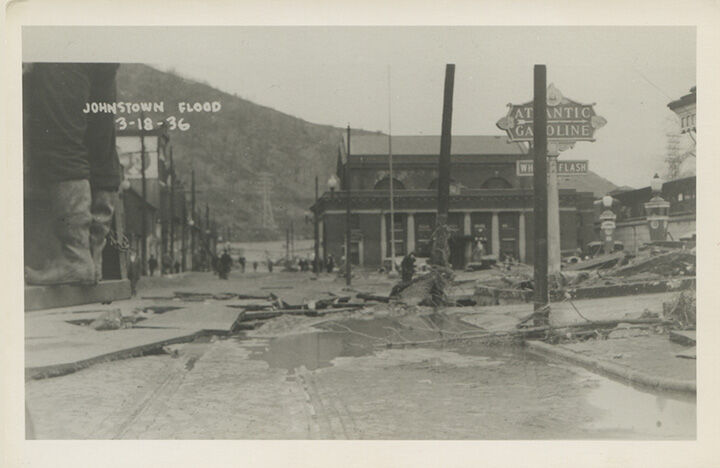 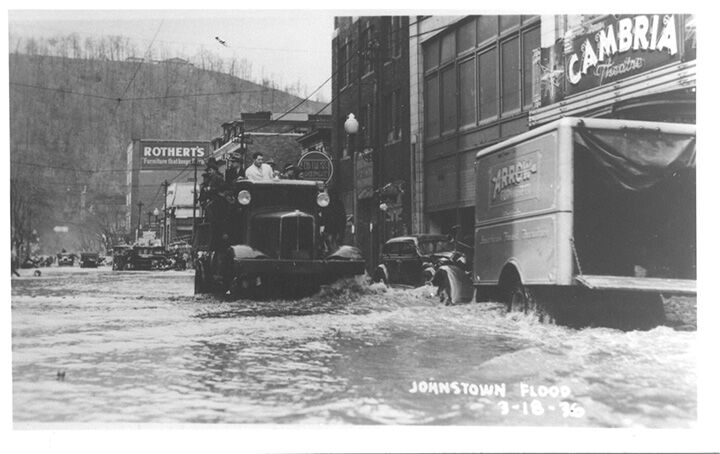 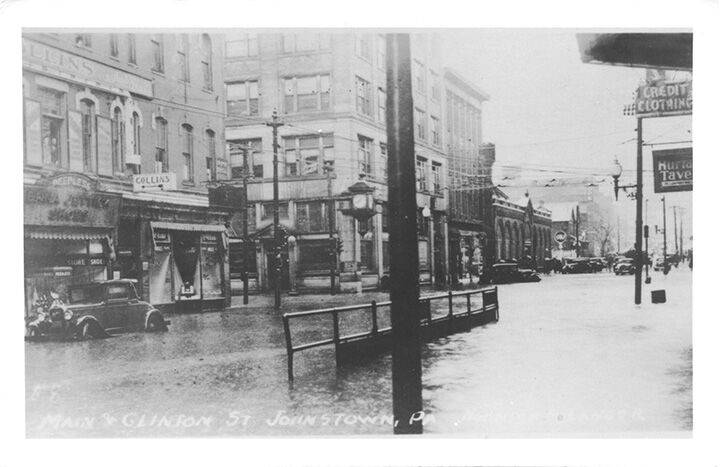 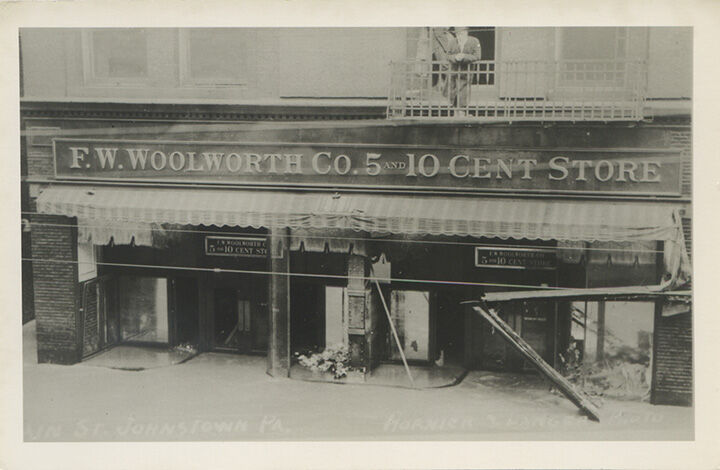 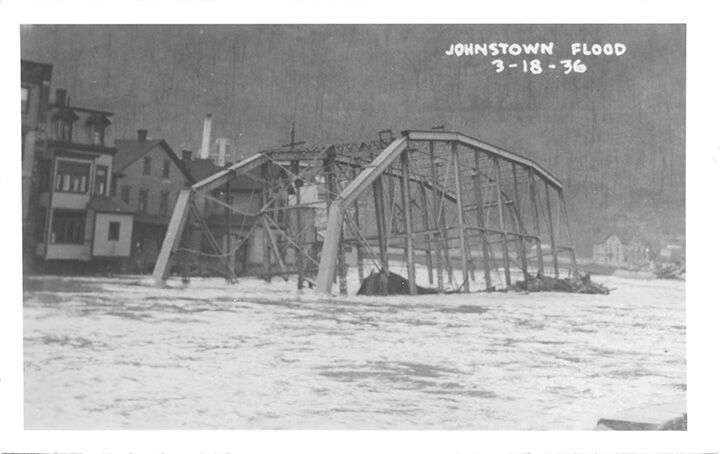 Franklin Street Bridge washed down the river with Napoleon Street in the background.

This private collection of photos was provided to Johnstown Magazine by Isabel Cruse.

Franklin Street Bridge washed down the river with Napoleon Street in the background.

Eleanor Roosevelt, the First Lady, also paid a visit to Johnstown, arriving Nov. 19, 1940, by train. She wrote of the excursion in her personal papers. She noted a visit to Grandview Cemetery and the Red Cross Roll Call Headquarters that manufactured garments being shipped to Great Britain and Finland.

“I went with the Mayor (Shields) to see the flood control work which the Federal Government is helping them to put through,” she wrote.

“The work of dredging the two rivers, which will in the future safeguard the population from the ravages of the past, is in full swing and I was much interested to see it. The President inspected this work and told me of it some time ago, so I know he will be glad to hear of the progress made.”

JAHA has collected first-person accounts of the flood that have been digitized and available on its website.

Anyone wishing to learn more is invited to visit www.jaha.org