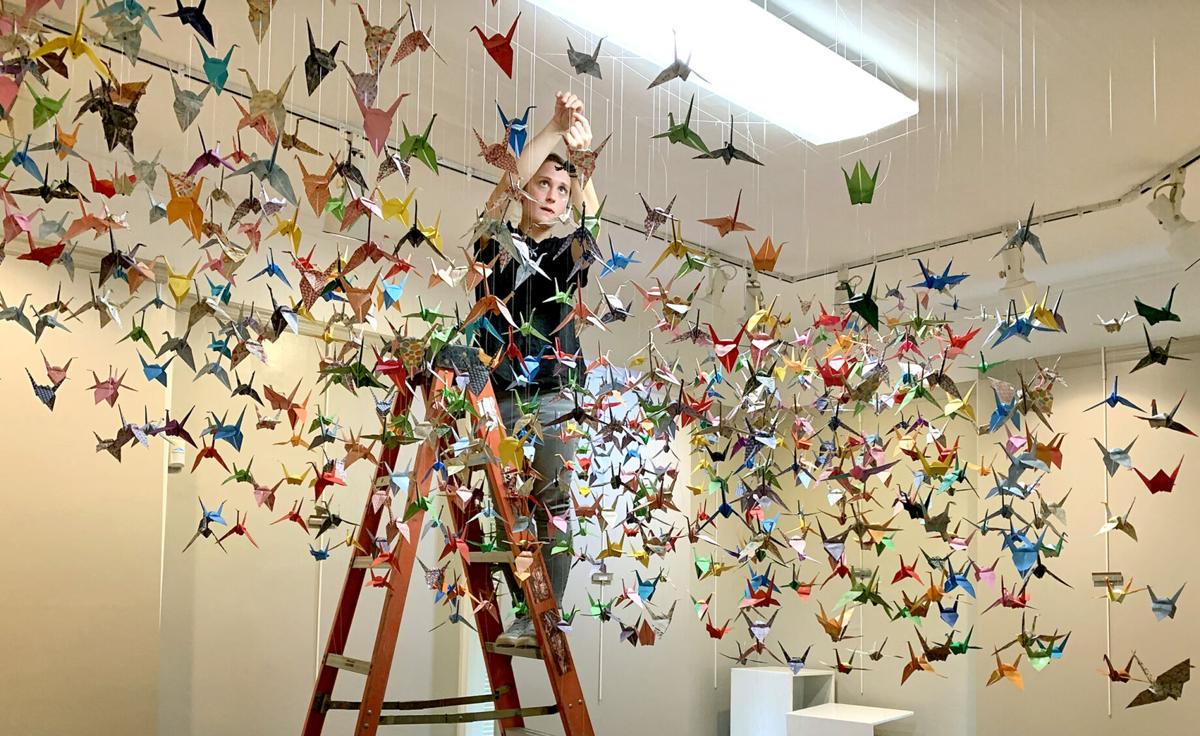 Christine Troll, an intern at Laurel Arts in Somerset, hangs paper origami cranes from the ceiling at Philip Dressler Center for the Arts that will be part of the "Reflections of the Human Spirit – America's County Responds to the Tragic Events of September 11" exhibition, opening Sept. 6 and continuing through Sept. 30. 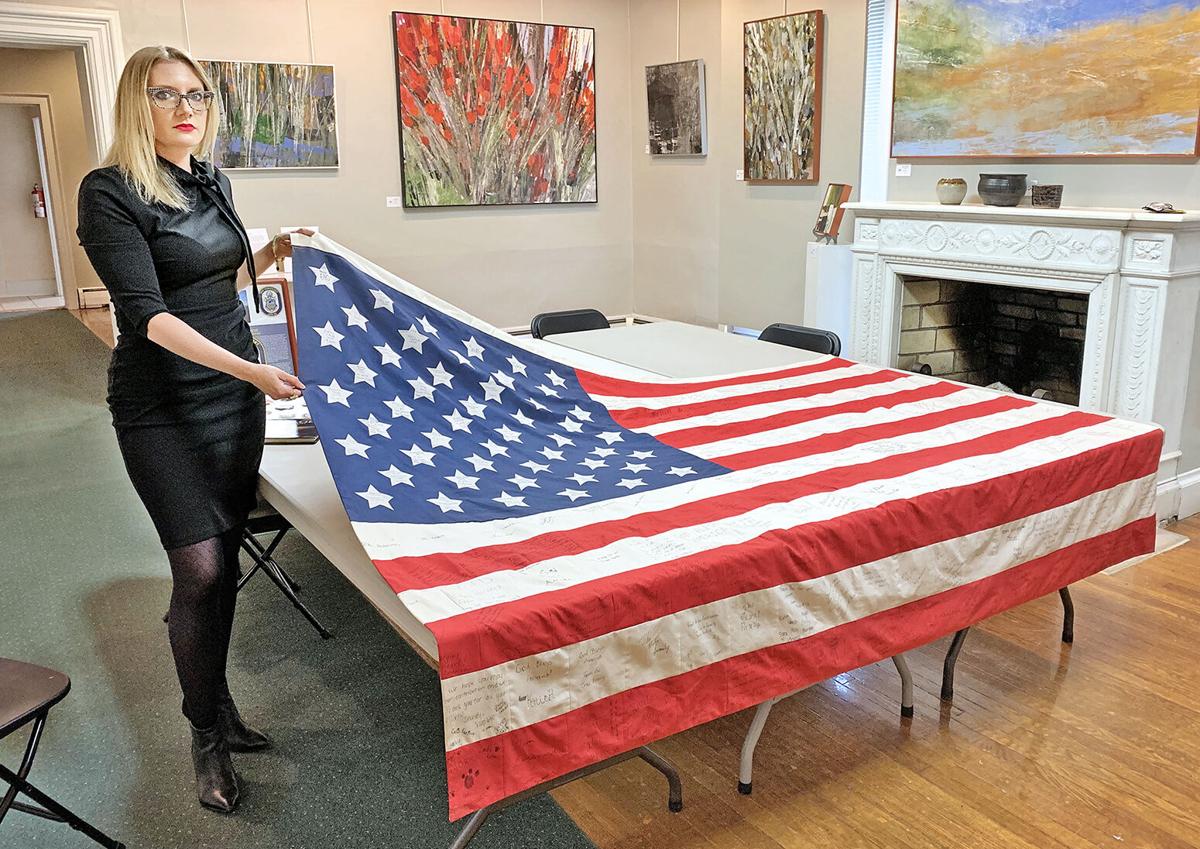 Jaclyn McCusker, executive director of Laurel Arts, holds an American flag from the Somerset Volunteer Fire Company that will be displayed during the "Reflections of the Human Spirit – America's County Responds to the Tragic Events of September 11" exhibition at Philip Dressler Center for the Arts. 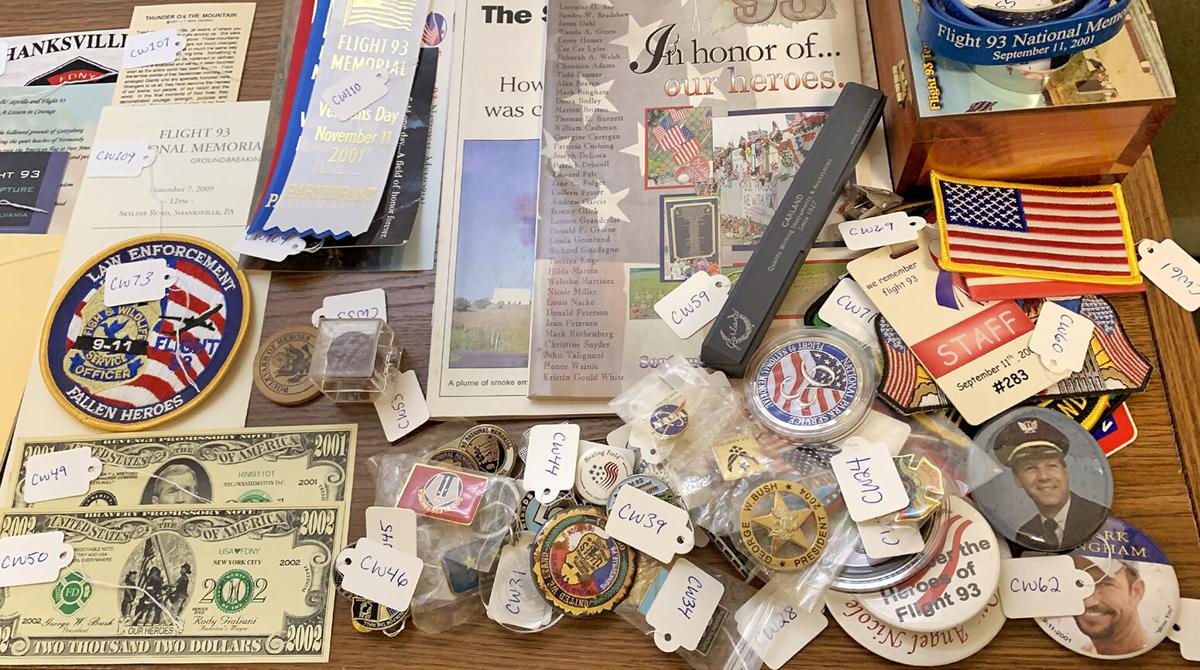 Memorabilia will be part of the "Reflections of the Human Spirit – America's County Responds to the Tragic Events of September 11" at Philip Dressler Center for the Arts in Somerset. The exhibition opens Sept. 6, 2021, and continues through Sept. 30, 2021. 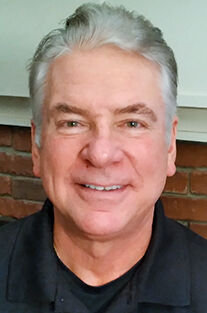 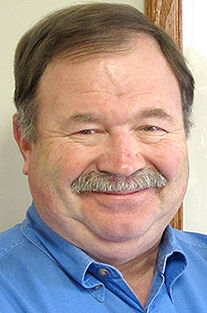 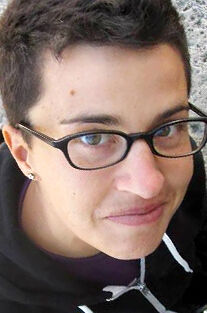 Christine Troll, an intern at Laurel Arts in Somerset, hangs paper origami cranes from the ceiling at Philip Dressler Center for the Arts that will be part of the "Reflections of the Human Spirit – America's County Responds to the Tragic Events of September 11" exhibition, opening Sept. 6 and continuing through Sept. 30.

Jaclyn McCusker, executive director of Laurel Arts, holds an American flag from the Somerset Volunteer Fire Company that will be displayed during the "Reflections of the Human Spirit – America's County Responds to the Tragic Events of September 11" exhibition at Philip Dressler Center for the Arts.

Memorabilia will be part of the "Reflections of the Human Spirit – America's County Responds to the Tragic Events of September 11" at Philip Dressler Center for the Arts in Somerset. The exhibition opens Sept. 6, 2021, and continues through Sept. 30, 2021.

In Somerset County, the hijacked United Airlines Flight 93 crashed in a field near Shanksville, killing all on board.

It was in those days, weeks and years that followed that the people of Somerset County came together to not only honor the lives lost, but also preserve the history of that day for generations to come.

To pay tribute to those who embodied the American spirit in the face of tragedy, the “Reflections of the Human Spirit – America’s County Responds to the Tragic Events of September 11” exhibition will be on display Sept. 6-30 at Laurel Arts’ Philip Dressler Center for the Arts, 214 Harrison Ave.

The display will feature artifacts from the National Park Service, fire departments and first responders, as well as photography, artwork, audio and video files of Somerset County and artistic symbols of hope.

“Last year, we were thinking about ways that we could be even more impactful in the community, and with it being the 20th anniversary of Sept. 11, and with the unique nature of how Somerset County was affected, we felt this was something we needed to do to thank those responders,” said Jaclyn McCusker, executive director of Laurel Arts.

“Without hesitation, they answered the call,” McCusker said.

“This was something that nobody could have predicted would happen in Shanksville, Pennsylvania. So, now, more than ever, we need moments like this to collectively see each other and see the hope through tragedy.”

She said people responded with their hearts.

“It also was the people who volunteered and later became known as the Flight 93 ambassadors. In having conversations with these individuals, I’m learning so much about what the people of this county gave in the moments and then years that followed with the connections to the families. At the heart of this exhibit, it’s all about community, bringing people together, respectfully celebrating what these individuals did and gave, and also honoring those heroes, lives that we lost.”

The exhibit, featuring 500 pieces of varying sizes, will be showcased in three themed galleries.

“In the first one, you’ll be walking into a very bucolic landscape that will introduce you to Somerset County,” McCusker said.

“This is something very much for Somerset County, but I’m hoping that people from the region will come to visit to see this and to see why this is called ‘America’s County.’ ”

A second gallery will house artifacts that Laurel Arts has collected or are on loan from the National Park Service, fire departments, the Somerset County Department of Emergency Services, community members and Flight 93 ambassadors.

“It’s anything from some of the Challenge Coins to flags to photographs to artwork to art installations,” McCusker said.

“The pieces from the National Park Service will be sensitive in nature, and we will have pieces of the wreckage. A lot of those artifacts will be in cases stationed throughout the room.”

A third gallery will feature 1,000 colorful paper origami cranes hanging from the ceiling.

“The symbolism is one of hope,” McCusker said.

“One of the young men who was on the plane was from Japan, and every year, his mom comes over and brings a paper crane, and it’s that symbolism of hope. At the end of the day, all of these artifacts, images and photographs are meant to instill a sense of hope, and that together, we are better.”

In conjunction with the exhibition, a series of special events will be held.

Scheduled to speak will be Dr. Glenn Kashurba, a pediatric and disaster psychiatrist and author of “Quiet Courage” and “Courage After the Crash.”

“During those initial days, his main focus was working directly with the families,” McCusker said.

“When they stayed at Seven Springs (Mountain Resort) after the crash, he was on the first bus to take the families to the crash site. He had a very visceral and emotional connection to these individuals, and he was there to help manage their emotions.”

His presentation will include footage from his interviews and documentaries.

“He has been involved with the families, and developing the memorial site,” McCusker said.

“He will give a presentation that has some elements on Flight 93, but it’s also focused on Somerset County, from historical events to its people and what they have contributed.”

Documentarian Katie Cook will speak on her film. It tells the story of Sept. 11 from the perspective of Somerset County.

Tom McMillan, author of “Flight 93: The Story, The Aftermath and The Legacy of the American Courage on 9/11,” will also attend.

In addition, the Somerset County Community Band will perform.

From 2 to 6 p.m. Sept. 11, Kashurba, G. Henry Cook and Katie Cook will give presentations, along with state and local representatives.

At 7 p.m., the Johnstown Symphony Orchestra will present a commissioned piece of music that speaks to the experiences and responses of the Somerset community during the period surrounding Sept. 11.

The piece, composed by Pittsburgh native Thomas Dougherty, features an oboe, a viola and a harp.

“They selected a composer who has created a piece to specifically match the feel and theme of the three galleries,” McCusker said.

“It will be like you are moving from one room to the next. We will be recording the piece, and it will be played repeatedly as the exhibit goes on.”

Programming for Sept. 12 is being finalized and will include guest speakers and screenings of documentaries and films.

“It felt natural to have events for that weekend,” McCusker said.

“It’s a moment for people to come together as a community to learn more and to thank those individuals.”

McCusker said the exhibit is for the people of Somerset County to take a moment and feel a sense of pride.

“People of this county get things done,” she said.

“We have grit and we have tenacity. I believe that is something that we should all be proud of, and it makes us even more proud to say that ‘Yes, we live in Somerset County,’ ” she said.

“We are trying to merge more of the arts with history in telling these stories, and it’s about lifting people up.”

For those viewing the exhibition, the hope is that, along with being educational, it will also convey the story of the people of the Somerset community.

“Now, more than ever, we need things that bring us together.” McCusker said.

“At the end of that day, that’s what it’s all about. It’s people coming together and working together. It’s looking past all of the other stuff.

“Reflection of the human spirit, that’s what it’s about, and it’s the best of us, and we need to move forward together.”

Plans are also being finalized to host school tours of the exhibit.

There is no fee to attend the exhibit or special events.

Gallery hours are 11 a.m. to 6 p.m. Mondays through Thursdays and noon to 4 p.m. Saturdays.

'Reflections of the Human Spirit'

What: "Reflections of the Human Spirit – America's County Responds to  the Tragic Events of September 11" exhibition.

Events are still being finalized.

On his first visit to Flight 93 National Memorial on Saturday, Frank Siller saw the parallels between the actions of the passengers and crew on Sept. 11, 2001, and the actions of his firefighter brother on that same day, nearly 300 miles away.