In Chapter 2 of “Your Story,” an ongoing serial written by Tribune-Democrat readers, Ashlynn Marshall picks up a skeleton key that fell out of a shoe in the basement. 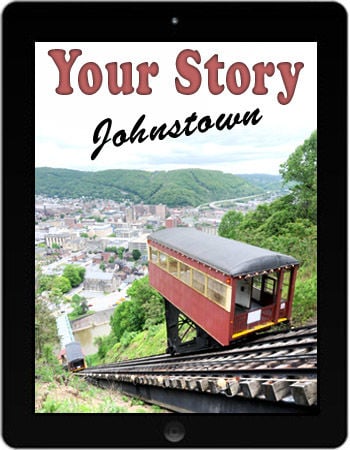 In Chapter 2 of “Your Story,” an ongoing serial written by Tribune-Democrat readers, Ashlynn Marshall picks up a skeleton key that fell out of a shoe in the basement.

In the introduction to “Your Story,” Rachel Marshall and her two children, Harrison, 10, and Ashlynn, 8, moved into their new home.

The fresh start was just what the recently divorced mother and children needed to rebuild their lives.

Upon arriving at the home and unpacking the car, Rachel noticed an older woman across the street peering out the window.

The woman made her way out of the house and introduced herself as Martha Kline and said she had lived in the neighborhood almost her entire life.

After telling Rachel not to hesitate to ask if she needed anything, Martha started going back to her house but turned around and walked back to Rachel.

She told Rachel that many years ago the original homeowners suddenly up and left one night and never returned.

Martha explained that rumor had it they left behind personal belongings hidden throughout the property.

She added that nobody knows for sure what and nothing has ever been found.

Rachel wasn’t sure what to make of the tale but quickly dismissed it.

When Martha returned home, her husband asked if she told the new neighbor the story of the mysterious original owners.

She told him she had but didn’t tell Rachel everything.

As the weeks passed, the Marshall family settled in nicely and it was finally feeling like home.

One morning while in the basement, a faint light across the room caught Rachel’s eye.

As she moved closer, she saw a small door and slowly reached for the handle ...

When Rachel opened the door, she saw the sun shining through a window reflecting onto a green mossy puddle on the floor next to the back wall.

Calling Harrison and Ashlynn, the three of them slowly entered the room to look around.

Hanging from the hooks on opposite sides of the room were some clothes that were completely covered in cobwebs.

There was a man’s black tuxedo, complete with tails and a top hat.

There also was a Victorian white wedding gown, with lace, a high neck and long train. Rachel noticed a spot which appeared to be a dried blood stain on the neck of the dress.

Looking at the dress further, Rachel noticed a necklace, which had a locket hanging from the chain.

Inside the locket was a picture of a man. She didn’t know him but there was something a little familiar about him.

Rachel began to think about what her neighbor Martha had told her about the original owners of the house mysteriously leaving one night and never returning, and the rumors about them supposedly leaving personal items throughout the house.

An eerie feeling began to overtake her.

Looking around the room, Harrison found a walking stick and put it in the puddle to stir it but it didn’t touch bottom.

Catching him off guard, the stick slipped out of his hand and disappeared into the hole. He reached for it but it was nowhere to be found.

Ashlynn walked over to the tuxedo and touched it, causing it to fall to the floor.

The suit had been covering a small hole that went deep into the wall.

Ashlynn reached her hand in to see if there was anything in there and pulled out a pair of shoes.

As she was pulling them out of the hole, something fell out of one of the shoes.

Ashlynn reached down and picked up ...

Ashlynn held up the key, studying it in the light.

“What did you find?” asked Harrison.

Rachel walked over to join the kids.

As Ashlynn turned the key over, she noticed an inscription. She dusted off the key and brought it closer to try to understand what it said.

“They are very old keys. Typically, they are handcrafted and made when someone is trying to hide something,” said Rachel.

Ashlynn was now even more mesmerized by the key than before. As she looked back at it, she read the inscription “281810.” She repeated it as if that might help them understand it.

As they all contemplated what the key might be for, Rachel finally broke the silence, “Let’s go ask Martha if this might mean something to her.”

When they reached Martha’s house, Harrison rang the bell.

Martha opened her door and stepped outside to greet the three.

Ashlynn, full of excitement, hurriedly blurted out, “I found a skeleton key that fell out of a shoe. It has an inscription, 281810. Do you have any idea what that might mean or what the key might be for?”

Martha paused for what felt like an eternity to Ashlynn as if she were reliving memories of a distant past all over again.

“Oh, sorry my dear,” Martha replied, as if she was broken out of a trance. “May I?” she said as she reached for the key from Ashlynn.

Ashlynn handed it over, and Martha began studying the key.

Almost whispering, she spoke, “As I’m sure you are aware, skeleton keys like this are rare to find and likely could unlock something very important and valuable. This key certainly is a rare one. When these were made, the last four digits were the year they were made with the first digits being the numbered key made by the locksmith. So this key is a very old one indeed as it was made in 1810 and was the 28th key that was produced by this locksmith. Truly, an extraordinary finding you three.”

“Do you have any idea what it might belong to?” Ashlynn asked.

“I am very sorry, but I do not,” Martha replied.

As Rachel observed Martha, she couldn’t help but think that she was holding something back.

“Thank you for your time Martha,” Rachel said politely. “We must be getting back now.”

“Anytime, thanks for stopping over,” Martha said.

“Mom, what are you doing?” Harrison and Ashlynn asked their mom in hushed tones.

“I think she can help us,” Rachel said.

As they walked away from the house, Ashlynn finally asked, “Why did you leave, Mom?”

“I didn’t want to overstay our welcome, and besides, we need to get home and make some dinner,” Rachel said.

As Rachel said those words, she couldn’t help but recall when Martha began to smile when she first learned about the key.

That evening, while the kids slept, Rachel’s curiosity got the best of her.

She couldn’t fall asleep, so she decided to go for a walk. It was refreshing to get out of the house as it was a cool, crisp night.

As she walked past Martha’s house, she never noticed that in her backyard there was one single tree. It caught her attention because it was such an open space, except for that tree.

Surprised by her reaction, she found herself nearing the tree.

It was very late, so she assumed everyone must be asleep, but still, her nerves were tense as she walked onto Martha’s backyard.

As Rachel approached the tree, her eyes widened.

Here is your chance to author the third chapter of “Your Story,” an ongoing serial written by Tribune-Democrat readers.

We provided the introduction on July 4. Sue Buck, of Ebensburg, penned Chapter 1 on July 18 and James Tucker, of Richland Township, wrote Chapter 2.

Readers are invited to pick up the story line from there.

To submit an entry, continue the story thread and try your creativity at writing Chapter 3.

Please hold your submission to between 500 and 700 words.

Submit your entry by noon Thursday.

The goal is a five-chapter, mystery-themed story, ending on Sept. 12.

The winning next chapter and a short story about the author will be published on Aug. 15, and the process will begin again.

For the Tuckers, writing Chapter 2 of The Tribune-Democrat’s “Your Story” was a family project.