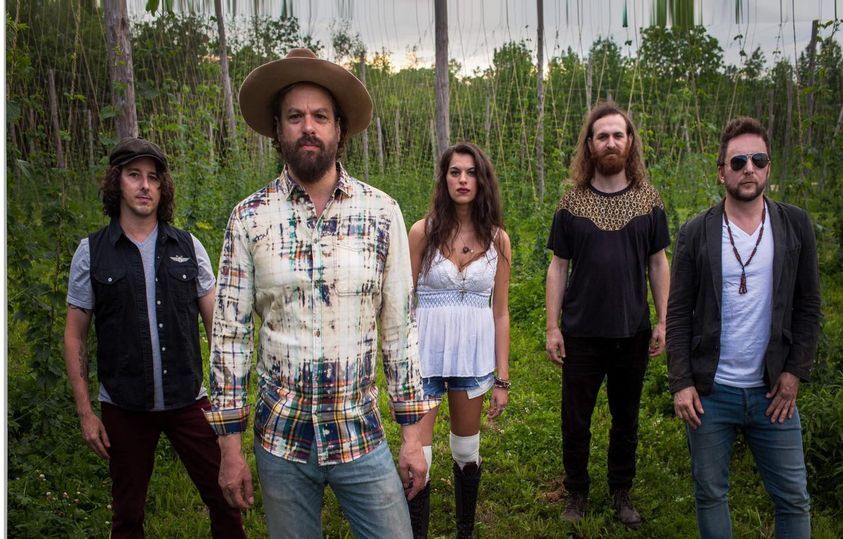 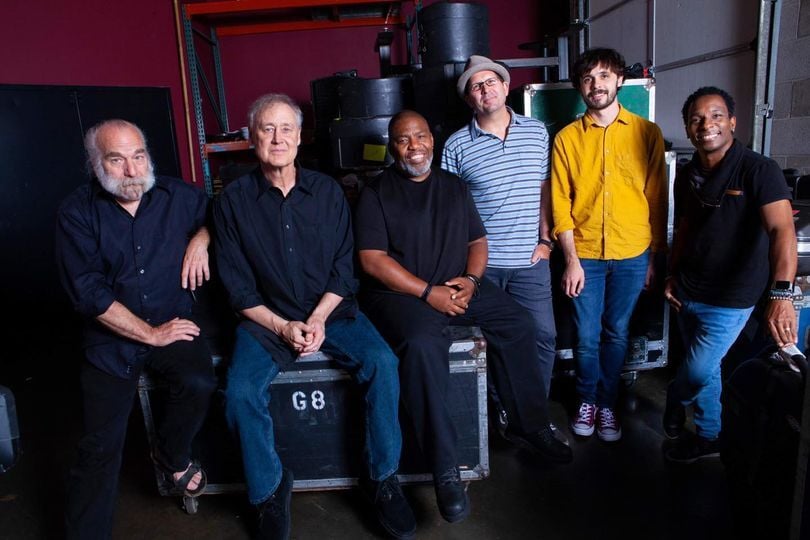 Bruce Hornsby & the Noisemakers will be the headliner on Oct. 2, 2021, at the AmeriServ Flood City Music Festival at Peoples Natural Gas Park in downtown Johnstown.

A total of 14 bands will play during the two-day AmeriServ Flood City Music Festival on Oct. 1 and 2, 2021, at Peoples Natural Gas Park in downtown Johnstown.

Bruce Hornsby & the Noisemakers will be the headliner on Oct. 2, 2021, at the AmeriServ Flood City Music Festival at Peoples Natural Gas Park in downtown Johnstown.

A total of 14 bands will play during the two-day AmeriServ Flood City Music Festival on Oct. 1 and 2, 2021, at Peoples Natural Gas Park in downtown Johnstown.

JOHNSTOWN, Pa. – The stages will be rockin’ at this year’s AmeriServ Flood City Music Festival.

The festival, which will be held Friday and Oct. 2 at Peoples Natural Gas Park, 90 Johns St., downtown Johnstown, will feature 14 bands, including headliners Bruce Hornsby & the Noisemakers and Uprooted, featuring Michael Glabicki, of Rusted Root.

“We’re excited to have live music, and there’s a pent-up demand for it,” said Ron Carnevali, festival chairman.

He said this year’s festival offers a diverse collection of music and bands.

“There’s a lot of variety in the lineup this year, and we have some really neat stuff,” Carnevali said.

“Uprooted, featuring Michael Glabicki, of Rusted Root, is one of the most popular acts ever to come out of the Pittsburgh region, and they’ll deliver a terrific show for us on Friday,” Carnevali said.

In his most prolific period to date, Glabicki is focusing his energy on his new band, Uprooted, to carry on the legacy of Rusted Root’s energetic music while recording new music for the debut album.

To honor the past, Glabicki is taking Uprooted on tour to perform the multiplatinum album “When I Woke” in its entirety.

“I think they’re going to be a big crowd-pleaser and people are really excited about seeing them,” Carnevali said.

On Oct. 2, Bruce Hornsby & the Noisemakers will be the headliner.

“We have wanted to present Bruce Hornsby & the Noisemakers at the festival for the last few years,” Carnevali said.

“They are an act with almost limitless appeal for a wide range of audiences. We are thrilled to be presenting them on Saturday night of the 2021 festival.”

Hornsby debuted with the multiplatinum 1986 album “The Way It Is.”

From there, he has steered his way through a stint on keyboards for the Grateful Dead, writing music for Spike Lee’s films and albums exploring jazz, bluegrass and contemporary classical music.

After taking the music world by surprise with his wide-ranging, critically acclaimed 2019 album “Absolute Zero,” the singer, songwriter, composer and bandleader has returned with a follow-up that picks up where its predecessor left off, according to the band’s website.

“He brings so much more to the festival than a couple of recognizable songs,” Carnevali said.

“He’s really prolific and is a great fit for our festival.”

An additional 12 acts will perform during the two-day festival.

Midnight North has been playing together since 2011. The band has since established itself as a mainstay on the nationwide touring circuit.

Rolling Stone hailed the band as the “Best New Act” in its review of 2018’s Peach Music Festival, saying the group “takes the best parts of roots music and weaves them into a tapestry of rock and Americana.”

“I really like the nature of their music and I especially like their vocals. I think they’ll be a big hit.”

Maggie Rose channels influences that existed long before she was born, in a place completely unlike today – pretty much the intersection of all-American rock and soul, with just enough British sparkle to make her music shine. The New York Times proclaimed, “Maggie Rose is a sturdy heartbreaker, full of astute, aggrieved songwriting and attitude that even in the post-Miranda Lambert era feels knifelike.”

“I’m really excited about her because she has a new album out that’s getting rave reviews and attention in Rolling Stone magazine,” Carnevali said.

“She’s a really gifted singer and people will be blown away by her.”

Marco Benevento has been dubbed “one of the most talented keys players of our time” by CBS Radio.

He has released six critically acclaimed solo albums over the past decade and performed everywhere from Carnegie Hall and Newport Jazz to Lollapalooza and Bonnaroo.

“He’s an experimental keyboard player and very much a part of the jam-band scene,” Carnevali said.

“He’s the late-night show on Oct. 2, and I think he’s going to close the festival in a really cool, improvisational kind of way. It’ll be a fun show.”

Roosevelt Collier was brought up in the “sacred steel” tradition of the House of God Church and built his reputation in The Lee Boys, known for their spirited, soul-shaking live performances. He leaves an indelible mark on listeners, flooring audiences with his lightning-fast slide work on the pedal steel. Collier last played the festival as part of The Lee Boys in 2006 and 2010.

“It’s going to be great to have him back with his own band, and it’s a sound that Johnstown has grown to know and love,” Carnevali said.

Billy Price Band has been entertaining audiences in the region since the early 1970s. In April 2016, Price was officially recognized and inducted as a Pittsburgh Rock ’n’ Roll Legend. Price is a longtime favorite at the festival, having played the event in 2006, 2010, 2012 and 2016.

“This will be a great show.”

Colebrook Road bridges the divide between straight-drive, traditional grass and genre-warping progressive grass and creates new bluegrass enthusiasts while expanding the genre’s definition for established fans, according to the band’s website. The band has built a fan base in Johns-town through appearances at Venue of Merging Arts and other venues.

“They’re a terrific regional band and are a tried-and-true bluegrass act,” Carnevali said.

West Philadelphia Orchestra is known for ecstatic parties with a mashup blend of Balkan brass, improvisation and American beats that has only deepened with time, according to the band’s website. The band first came to the area for the Johnstown Slavic Festival in 2016 and 2018.

“This will be one of the most fun bands at the festival, and they do a modern take on old folk music,” Carnevali said.

“We expect them to be hugely popular with the audience and they’ll get you up dancing.”

Jukehouse Bombers are an explosive five-piece band from Indiana dedicated to keeping the blues alive and well. Their original songwriting reflects influences of classic blues, soul and southern rock, served up with a contemporary flavor.

FlowerChild celebrated its 25th anniversary in 2019 and continues to bring the fire and good times to all. Drawing inspiration from the jam/funk music of the ’60s and ’70, a FlowerChild show keeps the audience on its feet dancing.

Desperadoes have been rocking since 1976. Bassist Mike Suppes founded the band and joined forces with guitarist Mark Middleton in 1977. Middleton played lead guitar for the nationally signed band Raging Slab in the 1980s and ’90s.

Crawdad Joe’s founder, Joseph Dedon, grew up in southern Louisiana, where he was heavily influenced by southern rock, blues, southern gospel, hard rock, metal, jazz and country music. You can hear the mix in his performances where he plays for fans in his new home of central Pennsylvania and abroad.

“We have a nice collection of local bands to fill our the lineup – the Desperadoes are well-known in the area; FlowerChild is one of the best local acts we have, and they’re great musicians; Jukehouse Bombers comes from Indiana; Crawdad Joe plays cajun and zydeco like music; and the Ne’er Do Wells play traditional roots music and are a great group,” Carnevali said.

“We love to offer the opportunity to local bands to showcase themselves at our event and they’re going to be terrific.”

General admission tickets for the festival are $25 for Friday and $40 for Oct. 2.

Tickets can be purchased online at www.floodcitymusic.com, in person at the Heritage Discovery Center or the Johnstown Flood Museum, or at the gate on the days of the festival.

The following is the schedule for the AmeriServ Flood City Music Festival:

The Greensburg man drove to Johnstown and staked out a front-row seat for the Bruce Hornsby & the Noisemakers show during AmeriServ Flood City Music Festival.