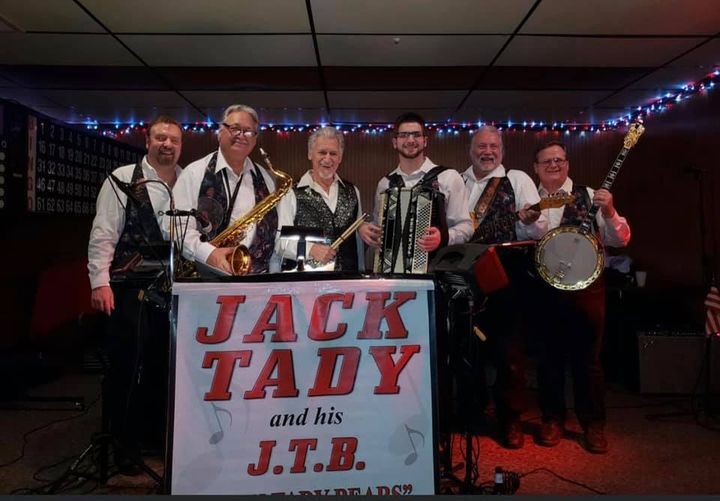 The sixth annual Johnstown Slavic Festival will feature food, crafts, presentations and music, including the Jack Tady Polka Band. The festival will be held from 4 to 10 p.m. Sept. 17, 2021, and from noon to 9 p.m. Sept. 18, 2021, in the parking lot and courtyard of Heritage Discovery Center, 201 Sixth Ave., in the Cambria City section of Johnstown.

Entertainers will play a variety of music during the sixth annual Slavic Festival on Sept. 17 and 18 in the parking lot and courtyard of the Heritage Discovery Center in the Cambria City section of Johnstown.

The sixth annual Johnstown Slavic Festival will feature food, crafts, presentations and music, including the Jack Tady Polka Band. The festival will be held from 4 to 10 p.m. Sept. 17, 2021, and from noon to 9 p.m. Sept. 18, 2021, in the parking lot and courtyard of Heritage Discovery Center, 201 Sixth Ave., in the Cambria City section of Johnstown.

Entertainers will play a variety of music during the sixth annual Slavic Festival on Sept. 17 and 18 in the parking lot and courtyard of the Heritage Discovery Center in the Cambria City section of Johnstown.

JOHNSTOWN, Pa. – A full slate of authentic music, food, crafts and presentations will be showcased at the Johnstown Slavic Festival.

The sixth annual festival will be held from 4 to 10 p.m. Sept. 17 and noon to 9 p.m. Sept. 18 in the parking lot and courtyard of the Heritage Discovery Center, 201 Sixth Ave., in the Cambria City section of Johnstown.

“The festival is held here at the Heritage Discovery Center because its themes, including immigration to the area and steel and coal history, are directly related to the history of Slavs in this region,” said Richard Burkert, president and CEO of Johnstown Area Heritage Association.

Brian Subich, festival committee chairman, said the credit for the festival goes to the late Dan Kisha, who had the idea of holding a festival that would not only celebrate Slavic immigrants to the country, but also keep it focused on Slavic traditions.

“The idea wasn’t just to provide authentic entertainment and food, but also to educate. We have the speaker series, which provides educational lectures to folks during the two-day event, and we also provide cooking demonstrations at the festival, so we do something a little bit different than some of the other area festivals in trying to keep it truly authentic.”

“We went from from maybe 500 people the first year to several thousand now for each day of the festival,” he said.

“People enjoy it and appreciate that there’s no rock bands or pizza stands. We keep it traditional.”

Performances will take place on the main stage in the Heritage Discovery Center parking lot and in the courtyard.

“We bring in musical talent from outside the area – from all over the northeast – and none of the groups performing this year have ever performed in Johnstown,” Subich said.

“It’s a variety of Slavic music and dance. We try every year to rotate talent so that people get a new experience.”

Main stage entertainment for Sept. 17 will include Jack Tady Polka Band performing from 4 to 5 p.m., followed by Zadnja Stanica from 6 to 8:30 p.m., entertaining with Tamburitzan music.

From 5 to 6 p.m., accordion player Bronco Toter will perform a mix of eastern European favorites in the courtyard, followed by accordionist Jacob Czerak from 7:30 to 9:30 p.m.

On Sept. 18 on the main stage, entertainment will feature Kolo Club “Marian,” one of the oldest Croatian folklore ensembles in the United States, from noon to 12:45 p.m.; Zadnja Stanica from 1 to 2:30 p.m.; Gypsy Stringz, entertaining with traditional Hungarian and Eastern European folk music, from 3 to 4 p.m.; Orchestra Forte, playing Ukrainian, polka and gypsy music, from 5 to 7 p.m.; and Orkestar Pobeda, entertaining with Eastern European folk music, from 7:30 to 9:30 p.m.

Courtyard performances include Bronco Toter from noon to 1 p.m., followed by accordion player Jim Vizzini from 2 to 4 p.m. and Toter closing out the festival from 7:30 to 9:30 p.m.

“It’s a wide range of music, and while some can be similar, there’s also differences in them as well,” Subich said.

“We look for a broad section that would appeal to a number of different audiences.”

“The festival committee will sell food for the first time, and we came up with the idea of selling nut roll sundaes that will have vanilla ice cream, chopped-up nut roll and topped with whipped cream and caramel sauce,” Subich said.

“We have the largest selection of imported ethnic beer of any festival in Pennsylvania,” Subich said.

“We can’t wait to sell our own unique beer that will only be sold at the Slavic Festival,” Subich said.

Back for a fourth year is Baba’s Nut Roll Throwdown, a nut roll-baking competition.

Slavic crafts will be available for sale, and a variety of organizations will be on hand to share information, including the William Penn Association, SNPJ Heritage Center, Austro-Hungarian Empire, First Catholic Slovak Union and Johns-town Croatian Fraternal Union.

Cooking demonstrations will be held in Galliker’s Café.

Georgette Brnilovich will make Serbian burek, a pastry made of phyllo dough and filled with meat and/or cheese, at 2:45 p.m.

“We want people to not only enjoy these foods, but learn how to make them,” Subich said.

Jerin has been researching Croatian family histories since 1986 and has connected with dozens of families across the world.

“I don’t know of any other Slavic genealogist in America who is more highly regarded than him,” Subich said.

“He travels across the country doing genealogy and explaining how to do it.”

John Smalia will present “My Journey as an Immigrant from Croatia to the United States” from 2:15 to 3:15 p.m.

Smaila was 8 years old when he moved to the United States with his family.

“He’ll be discussing what that was like as a young boy, coming here and not speaking any English and the experience and journey he had with his family,” Subich said.

There is no admission fee to attend the festival.

“We want to entertain and educate at this festival,” Subich said.

“We want people to have a great time, but I also hope they learn a little bit more about their ethnic and Slavic roots.”

The Heritage Discovery Center and Johnstown Children’s Museum will offer free admission during the festival.

Paid parking, which benefits the event, will be available in the Best Window & Door lot on Sixth Avenue, near Broad Street.

The Slavs also include the Carpatho-Rusyn people, whose descendants are present in the area.

From 1880 until 1920, thousands of Slavic immigrants came to Johnstown to find employment in the area’s mills and mines.

By 1920, 25% of Johnstown’s residents were of Slavic descent. They created a rich network of churches and social clubs to support their way of life and culture.

For more information on the festival, visit www.johnstownslavicfestival.org.

Where: Parking lot and courtyard of Heritage Discovery Center, 201 Sixth Ave., in the Cambria City section of Johnstown.