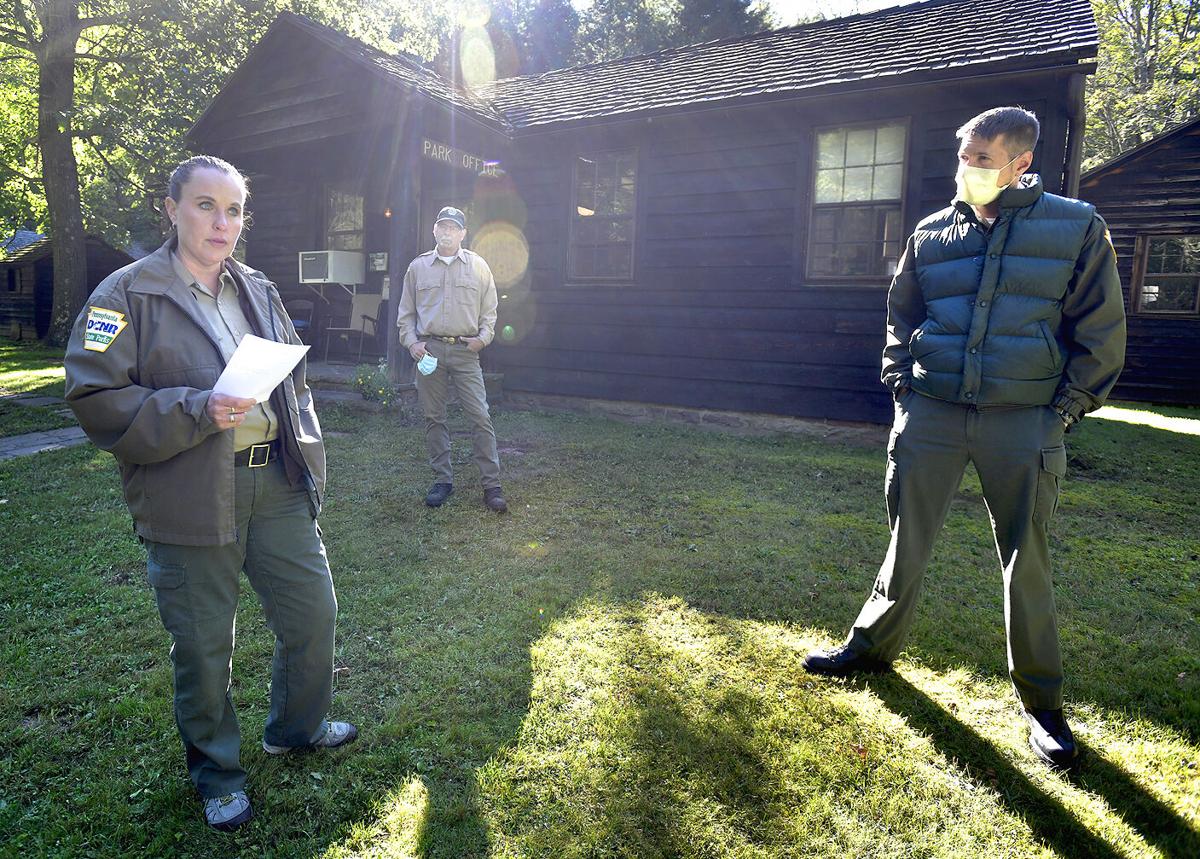 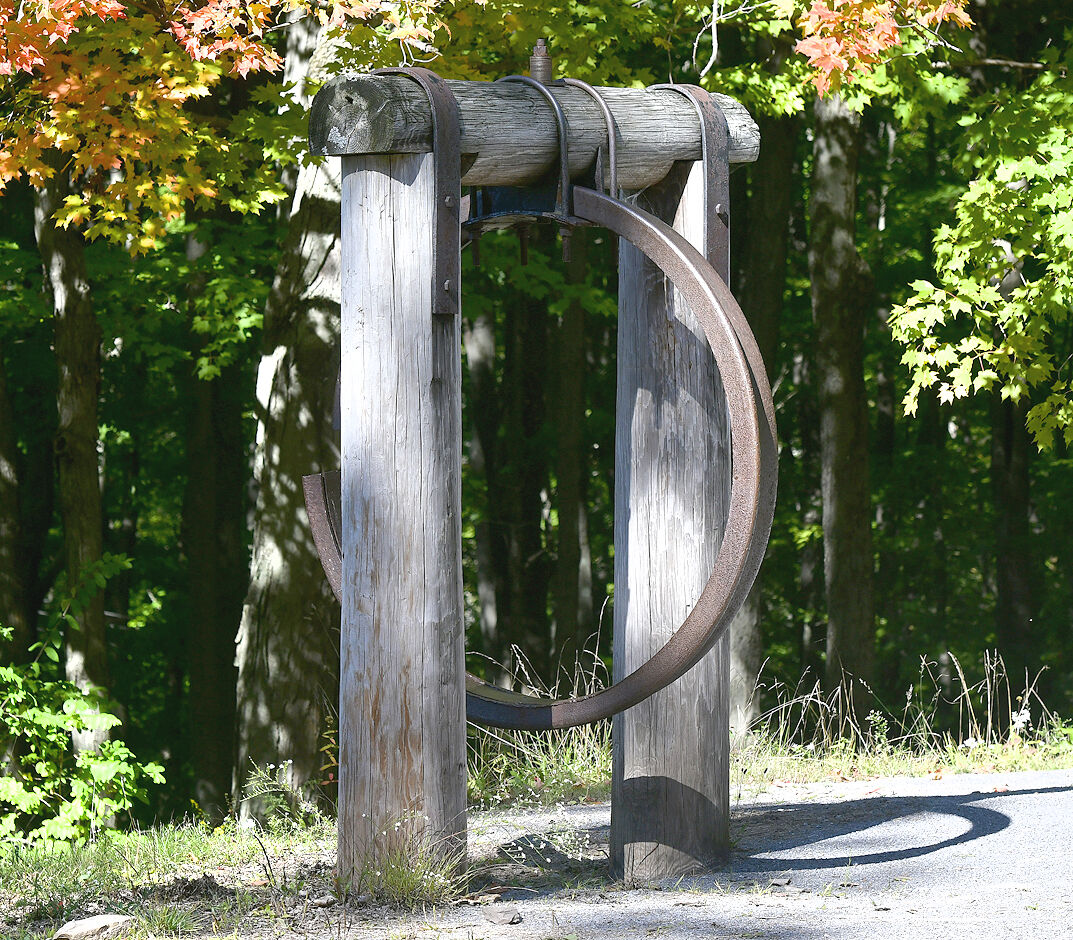 Blue Knob State Park covers 6,128 acres and is the second-highest mountain in Pennsylvania. The park offers an array of recreational opportunities for all four seasons – camping, swimming, picnicking, hiking, mountain biking, skiing, fishing and hunting. A dinner bell is seen at Camp #1.

Blue Knob State Park covers 6,128 acres and is the second-highest mountain in Pennsylvania. The park offers an array of recreational opportunities for all four seasons – camping, swimming, picnicking, hiking, mountain biking, skiing, fishing and hunting. A dinner bell is seen at Camp #1.

Blue Knob State Park will celebrate its 75th anniversary on Saturday, and those involved with day-to-day operations are striving to make it a family-friendly destination, where those of all ages can experience the great outdoors.

“We want this to be a rural park where you can come for peace and solitude – and disconnect,” said Jessie Kohan, Blue Knob State Park’s naturalist and environmental education specialist.

“With the mountain area, it’s very nice that a lot can be going on but it still makes you feel like you’re the only person in the park.”

Blue Knob State Park covers 6,128 acres and is the second-highest mountain in Pennsylvania at 3,146 feet.

The park can trace its history back to the first settlers who arrived to Blue Knob soon after the American Revolution.

Pennsylvania Germans moved from the eastern part of the state and cleared and farmed land near Pavia.

Early industries included several distilleries in 1812, followed by a log mill in 1833 and a gristmill in 1843.

In the late 1800s, logging companies, based in South Fork, clear-cut the forests of hemlock and hauled away the lumber on steam trains that snaked up the steep hillsides.

On Sept. 26, 1945, the National Park Service transferred Blue Knob to the Commonwealth of Pennsylvania and it became Blue Knob State Park.

“We still honor the homesteaders who were here that the property was bought from,” said George Corle, Blue Knob State Park’s maintenance supervisor.

“We name swimming pools and ballfields after family names, and it gives you an idea of the history and who lived here.”

Those coming to the park can enjoy an array of recreational opportunities for all four seasons such as camping, swimming, picnicking, hiking, mountain biking, skiing, fishing and hunting.

“We have the 26-mile Lost Turkey Trail, which goes through game lands, forestry lands and the state park,” Kohan said.

“Inside the park, we have 18 miles of trails that are used for horseback riding, snowmobiling, cross-country skiing, hiking and mountain biking.”

The park has two swimming pools – one public and one for camp groups – along with rentable cabins and 50 tent and trailer sites.

It also offers a 100-person capacity group camp that is available for overnight and weekly use to organizations such as Scouting or church groups.

Fishing enthusiasts can find enjoyment at Bobs Creek and its tributaries.

Streams within the park contain native brook trout along with stocked trout placed through a cooperative nursery program operated by Pavia Sportsmen Club Inc. and the park.

In addition, about 5,000 acres are open to hunting, trapping and dog training during established seasons.

Part of the park’s offerings include environmental education and interpretation programming.

“I do a lot of school group and group camp programs along with programs for those who might be renting a pavilion for a family reunion or church group,” Kohan said.

“It can be environmental education or recreation based, so it’s pretty much anything you can think of.”

From 10 a.m. to noon Oct. 3, the park will offer the 2.5-mile “Fun Fall Hike,” where participants will hike Chappell’s Field Trail to an outlook vista. It also will include a fall trivia game to learn about apples, pumpkins and animals.

From 1 to 2 p.m. Oct. 17, Kohan will present “Halloween Critters,” including a “Jeopardy!”-style game on owls, bats, spiders and snakes.

“These programs are for the general public – little kids to adults – you name it,” she said.

Programs are limited to 25 people, and those attending are asked to wear masks and practice social distancing.

A popular attraction is Blue Knob All Seasons Resort, which was opened on the site of a former military base.

The resort includes 36 trails on slopes for skiing, snow boarding and tubing, a golf course, trails for mountain biking and cross-country skiing.

“The top of the mountain where the lodge sits is part of the park.”

Moving forward, there are no plans for additions or expansion projects at Blue Knob State Park other than to maintain existing infrastructure.

“We’re doing our best to maintain what we have so we can better serve the public.”

With COVID-19 concerns canceling many events, officials have seen a rise in people coming to the park.

“There’s definitely been an increase in attendance, and not just here but across the board at state parks,” McCorkle said.

like this. A lot of things have been closed and folks aren’t taking family vacations, so the parks have become much more important.”

He said the increase in attendance has been great for Blue Knob State Park to show how much people appreciate what it provides to the region.

“That’s important to us to continue to get funding to keep everything open and maintained,” McCorkle said.

Kohan said as the park marks its 75th anniversary, she hopes the public will become more aware of what it has to offer.

“We want people to enjoy being out in nature and getting a little bit of time to relax and appreciate some of the wildlife and plants,” she said.

The park is open daily, sunrise to sunset, with some facilities closing at the end of the summer season.

For more information on Blue Knob State Park, call the park office at 814-276-3576 or visit www.dcnr.pa.gov and click on “Find a State Park.”