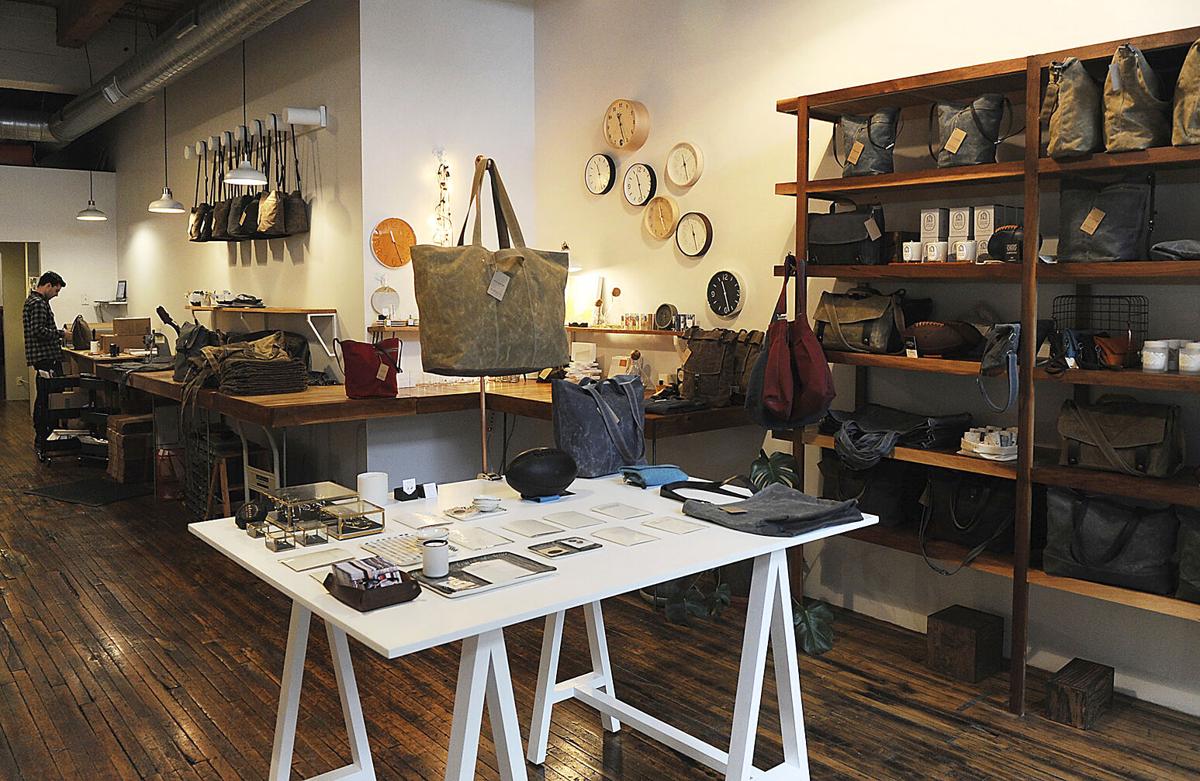 After a decade of selling its handmade canvas and waxed-canvas bags online, Moop, shown here March 14, 2017, opened its first storefront in the fall of 2016 on First Ave. in Pittsburgh, Pa. In a Golden Triangle teeming with restaurants, the Pittsburgh Downtown Partnership has set its sights on adding more retail — unique, one-of-a-kind shops it hopes will lure shoppers from regional malls. Jeremy Waldrup, the partnership's president and CEO, sees a future in the city's core for more shops like Moop, a handbag store on First Avenue, and Steel City, an apparel store that started as a pop-up and now has signed a lease for a location on Smithfield Street. (Nate Guidry /Pittsburgh Post-Gazette via AP) 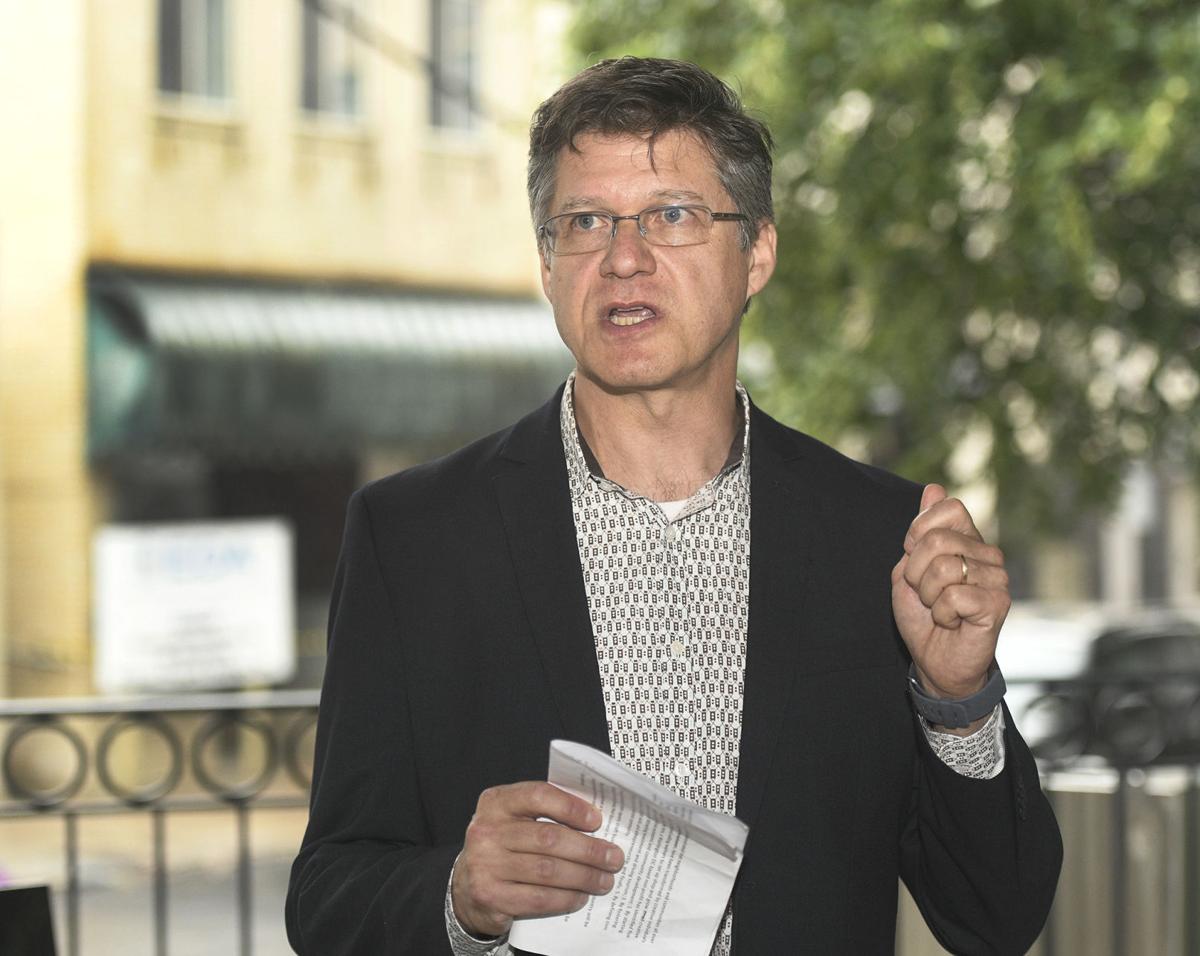 With the future Creator Square building behind him, architect Paul Rosenblatt, Creator Square’s founding director details the construction process, and the history on how this project came to light on Thursday, July 11, 2019. 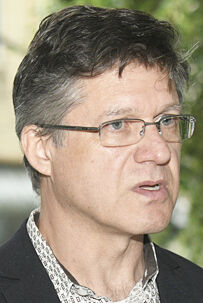 After a decade of selling its handmade canvas and waxed-canvas bags online, Moop, shown here March 14, 2017, opened its first storefront in the fall of 2016 on First Ave. in Pittsburgh, Pa. In a Golden Triangle teeming with restaurants, the Pittsburgh Downtown Partnership has set its sights on adding more retail — unique, one-of-a-kind shops it hopes will lure shoppers from regional malls. Jeremy Waldrup, the partnership's president and CEO, sees a future in the city's core for more shops like Moop, a handbag store on First Avenue, and Steel City, an apparel store that started as a pop-up and now has signed a lease for a location on Smithfield Street. (Nate Guidry /Pittsburgh Post-Gazette via AP)

With the future Creator Square building behind him, architect Paul Rosenblatt, Creator Square’s founding director details the construction process, and the history on how this project came to light on Thursday, July 11, 2019.

That’s the vision of Pittsburgh architect Paul Rosenblatt, who is set to open Creator Square, a business incubator, in the heart of Johnstown.

Having done some architectural work in Johnstown previously, Rosenblatt decided the city would be an ideal place for skilled craftspeople to grow into full-fledged, small-batch manufacturers.

“We want to show people that there is economic viability in some of the things they might do,” he said.

The Creator Square concept has been in discussion since 2015, consistently connected to the property at 134 Gazebo Park in downtown Johnstown. That is where Rosenblatt will be based.

The COVID-19 pandemic delayed the project’s planned spring 2020 opening, but Rosenblatt said Creator Square will start this month with the arrival of its first resident maker.

“Maker” is umbrella term for independent inventors and craftspeople making practical goods. Rosenblatt, founder of Creator Square, is himself a maker who specializes in furnishings, printmaking and textiles.

Rosenblatt’s architecture, planning, and design studio, Springboard Design, is one of 177 maker businesses in western Pennsylvania that have been supported by Bridgeway Capital’s Creative Business Accelerator, a social impact investor similar to JARI in Johnstown.

According to Bridgeway Capital’s Creative Business Accelerator Adam Kenney, there are plenty of old mill towns, but not all of them have the resources Johnstown has in place.

“Johnstown has all the elements needed to foster a maker ecosystem that supports the area’s economic future,” Kenney said.

“Creator Square can become the hub of this ecosystem which includes cultural assets such as the Center for Metal Arts, as well as small business supports such as JARI and Community Foundation for the Alleghenies.”

Four to eight makers can occupy Creator Square at a time. There, they would have access to studio space and a variety of equipment to produce their goods and sharpen their business knowledge.

Rosenblatt hopes that after a residency period of up to two years, the operations will stay in Johnstown and activate empty storefronts.

To Rosenblatt, Creator Square isn’t a revolutionary idea for Johnstown. The region’s penchant for manufacturing – from rail cars in the hey day of the area’s steel industry to high tech military equipment for today’s defense sector – is well established.

Creator Square aims to continue the tradition of making, but on a smaller scale, and with more control in hands of the makers, he said.

“It gives power to people who have the entrepreneurial skills or who have in their blood a tradition of making things a sense of ownership,” he said.

“You are in control of your own life, which is one of the things I think people lost a lot when those factory jobs disappeared, not just from Johnstown but from towns all over the country.”

According to a 2018 study commissioned by Bridgeway’s Creative Business Accelerator, the 177 maker businesses in its network had a gross economic impact or total “ripple effect” of $21.9 million on the Pittsburgh region that year. They also created or supported nearly 500 jobs.

It’s not the impact of a massive company, Kenney said, but it’s a targeted impact that’s equally important.

“The maker economy is characterized by small batches. These craft manufacturers are also crucial to economic revitalization because large manufacturers aren’t going to activate storefronts. But small-batch manufacturers will. We’ve seen it happen all over Pittsburgh.”

New technology has enabled makers to automate their production for small-batch manufacturing. And social media has allowed them to reach customers worldwide.

With tools such as 3D printers, computer-driven lathes and computer numerical control (CNC) printers and routers, manufacturing was revolutionized over the past 15 years, Rosenblatt said.

That equipment will be available to artisans at Creator Square as well as the Greater Johnstown Career and Technology Center, which is in partnership with the downtown project.

“Today, because of that technology, driven by computer programs that people can use themselves, it basically empowers people not to be dependent upon someone else creating jobs or a factory being relocated to a certain place like Johnstown,” Rosenblatt said.

“He was making things by hand and realized if he could automate the making of wooden smartphone cases using CNC routers and other kind of 3D printers, then he could increase the scale of his production,” Rosenblatt said.

“Creative people want to go to low-cost places where they don’t have to rely on getting a job – they are bringing their jobs,” Saks said. “And possibly making some jobs.”

He said he believes it can be done in Johnstown.

“It’s a matter of marketing, if anything,” he said. “It’s about the image of the city and how people perceive it.”

A group of Johnstown business leaders are working on that.

The Choose Johnstown! campaign is promoting Johnstown for its outdoor-recreation appeal and its affordability.

That campaign resulted from lifestyle trends accelerated by the pandemic – the ability to work from home and live away from densely populated and expensive cities.

With the increase in remote working, Saks said he foresees opportunities for creative business owners who may have been previously tied to a city where their significant other is employed.

“A couple might now be able to move to Johnstown to set up a creative business while the partner with the company job works remotely for PPG or wherever,” Saks said.

Saks stressed that a place like Creator Square is important for budding entrepreneurs.

“You can only work in your basement for so long,” he said.

The businesses that could emerge from Creator Square, if they resemble other small operations such as Kerf, would be made to withstand problems the retail industry experienced in the pandemic.

“If you are able to have a safe space to manufacture and ship anywhere in the world, you are set up for the post-pandemic world,” Saks said. “It’s one of the reasons we are still in business.

“We have a website optimized for web search. Somebody in Seattle can search ‘wood phone case,’ and we come up.”

Moop Shop is another example from Pittsburgh. The business specializes in canvas and waxed-canvas bags – designed and manufactured, start to finish, in a Pittsburgh studio.

In 2014, The Atlantic profiled Moop Shop, founded by designer Wendy Down.

“She has several full-time employees who work with her in a modest production shop where, together, they manage a small but nimble operation, producing and selling hundreds of bags a month,” The Atlantic’s story read.

Today, the Moop Shop Instagram account has more than 10,000 followers. Many posts showcase the Pittsburgh’s brick-and-mortar shop, but through Instagram and other social media platforms, businesses such as Moop have customer bases broader than their locale.

“She does most of her sales online,” Rosenblatt said. “She does super well. She sells her stuff and some other incredibly nice products from the storefront, but there is no barrier between her storefront and her manufacturing space. You can see people making the things you are buying.”

Moop, Kerf, Springboard Design and dozens of other maker businesses can be found on the PG&H online directory,

Kenney said Creator Square could one day have a similar online directory of maker businesses that it has helped launch in Johnstown.

“What Johnstown could expect is to be determined,” Kenney said. “But Johnstown is presenting itself as a place makers would want to go or where makers already in Johnstown can grow.

“Creator Square is an economic signal nationally that this is a place for makers.”