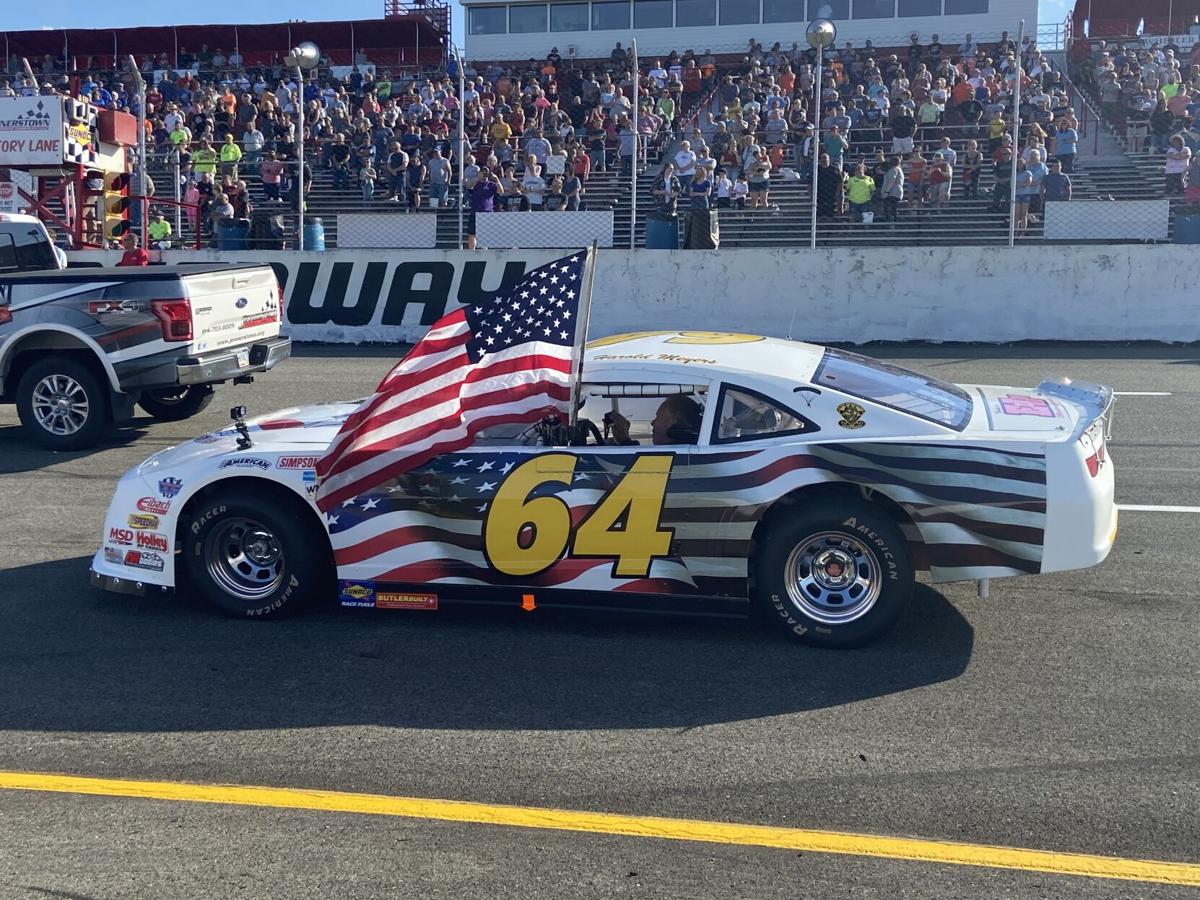 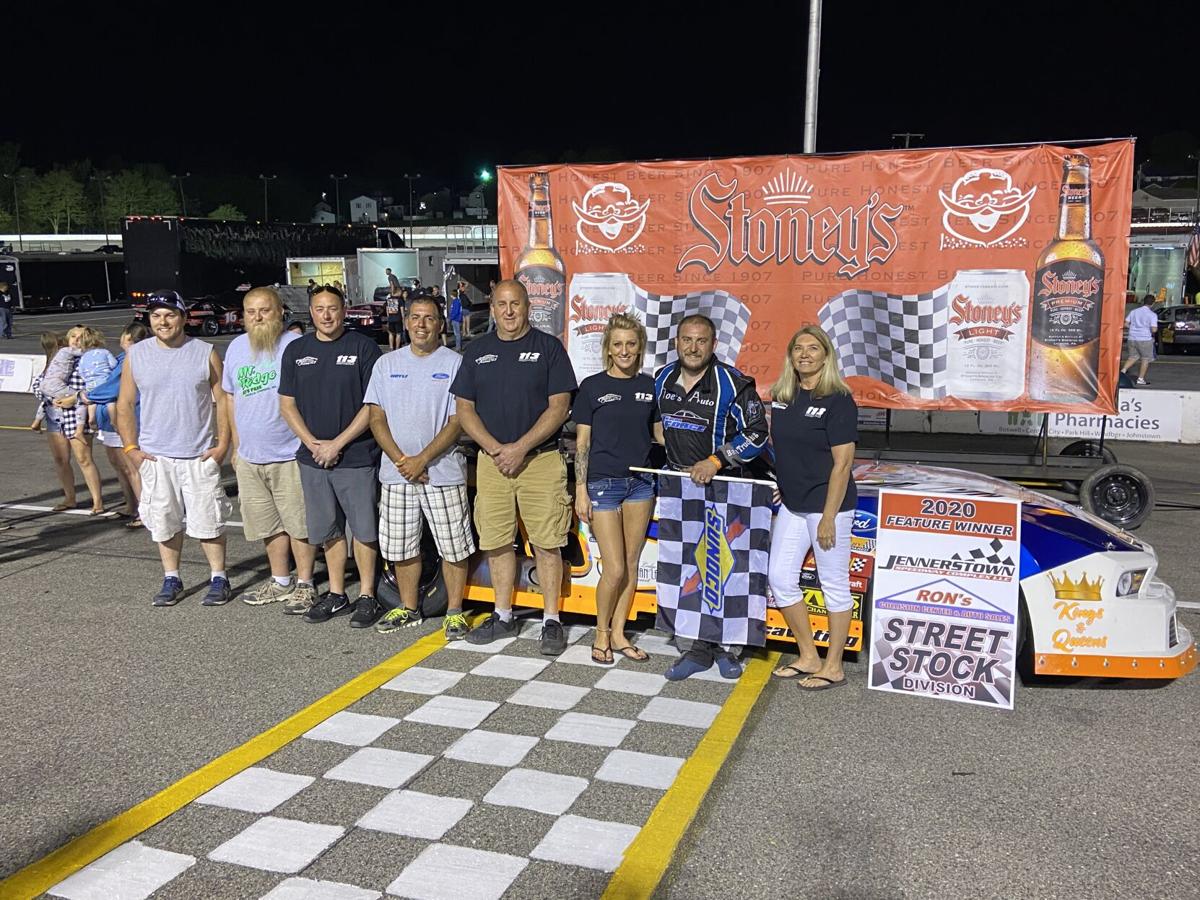 Casey Fleegle poses with his supporters and his vehicle after winning the street stocks feature Saturday, June 6, 2020, at Jennerstown Speedway. 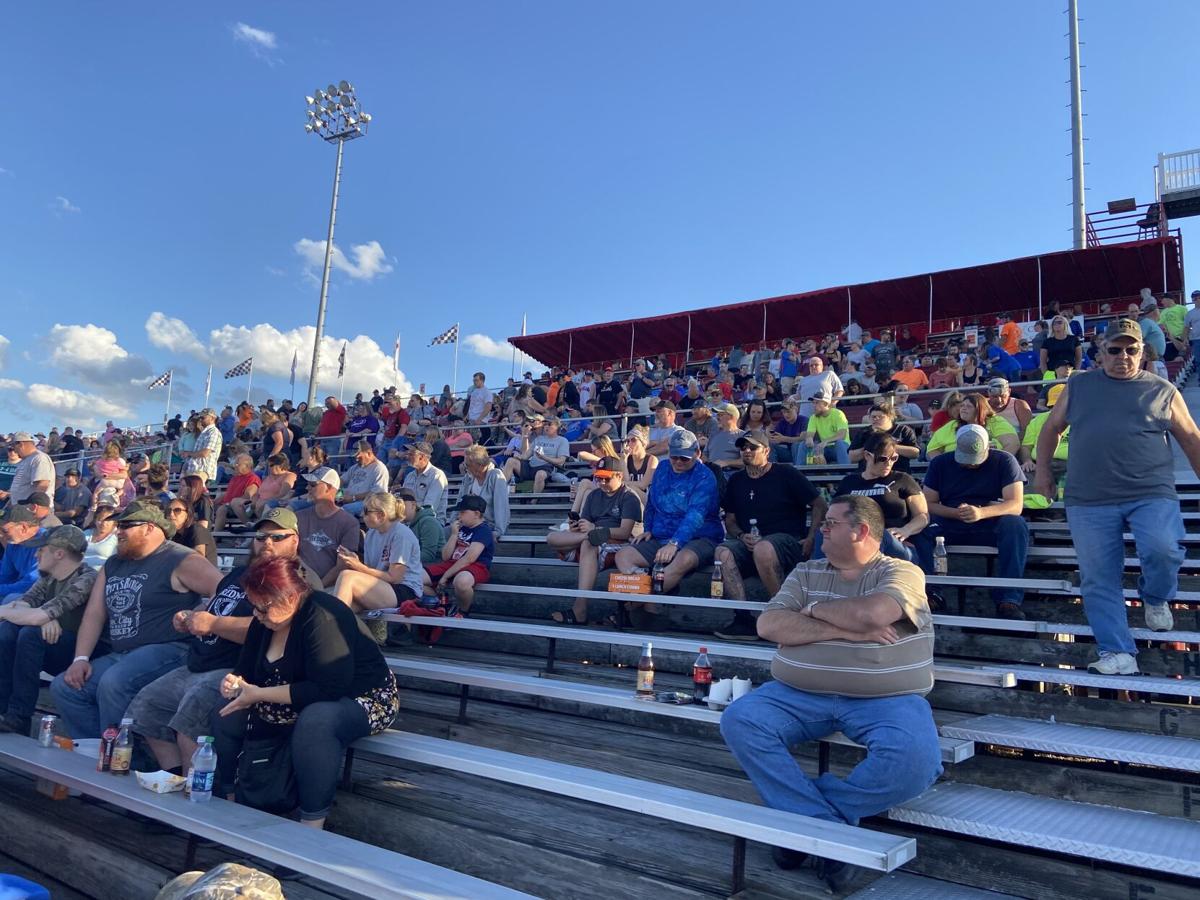 After the easing of coronavirus restrictions, fans are back in the seats for racing Saturday, June 6, 2020, at Jennerstown Speedway.

Casey Fleegle poses with his supporters and his vehicle after winning the street stocks feature Saturday, June 6, 2020, at Jennerstown Speedway.

After the easing of coronavirus restrictions, fans are back in the seats for racing Saturday, June 6, 2020, at Jennerstown Speedway.

JENNERSTOWN – After four weeks of silence, the roar of engines filled the air as Jennerstown Speedway kicked off its season after being delayed by the coronavirus shutdown. The common theme from both the fans and racers was of appreciation for what the track owners have done to make the 2020 season a reality.

“A lot of other tracks have already canceled their season,” said defending late model champion Teddy Gibala. “You have to thank them for sticking to their guns and finding a way to make it happen.”

“I just bought this car at the end of last season and I have been chomping at the bit,” said fast 4s driver Jason Truscott. “This is the first time ever racing, and I understand the need to take precautions, but I know everyone is ready to go. It means a lot that the owners were able to make this happen.”

Becky Horner is one of the few female drivers new to racing this year. She also was thankful to be able to finally take the green flag.

“This last month has been crazy,” Horner said. “I have been so excited I have literally gone out to the garage and sat in the car to visualize what I would be doing when we finally hit the track.”

Even track veterans had some nerves heading into Saturday night's action before several thousand fans.

“Usually, the first week or two, everyone races cautiously," said street-stock driver Casey Fleegle. “It is nice to have all these cars here tonight, and we even have cars from New Jersey and Ohio. It is great to see all these fans not afraid to come out and see some good racing action."

“At no point did we not think we would get the season started," Hribar said. “We have over 71 cars here in the pits and I believe that is a record for this management team."

The fans in attendance also were excited to finally see the cars on the track.

“I think it is wonderful that the track's owners stayed with it,” said Melanie Smith, who watched with her family. “They didn’t give up and held the hope out, and they are the reason we are all here today.”

• After an emotional introduction to start the evening, the first division to hit the speedway was the chargers for a 15-lap feature.

Adam Kostelnik passed the pole-sitter on Lap 2 for the lead, but a four-car pileup in Turn 3 on Lap 3 bunched the field up for a restart.

Fan favorite Dale Kimberly was able to get around the high side of Kostelnik on the restart and held off a late charge by Scott Mitchell to score the win, while Mitchell took second, and Kostelnik held on for third.

Evan Nibert led the first lap, but it was Jeff Vasos getting around him on Lap 2, and he never looked back on his way to his first-ever win on asphalt – ahead of Nibert. Michael Strouse ended up third.

• The third division to hit the track was the Modifieds for a 20-lap feature.

Adam Kostelnik started on the pole and led the first lap. But that was short-lived as Jason Busch took the lead on the second circuit. Anthony Aiello made his way up to second and this race looked like Busch’s to win.

But with six laps to go something broke in the rear end of Busch machine to bring out the caution, handing the lead over to Aiello.

On the restart, R.J. Dallape was able to keep the momentum on the outside and eventually worked his way ahead of Aiello to take the lead with four laps to go. Aiello tried to battle back but could not close the gap as Dallape scored his first win of the season ahead of Aiello. Kostelnik ended up third.

The Late Models sent 16 cars to the track for their 30-lap feature, and it was Somerset’s Garry Wiltrout leading wire to wire, despite having to hold off the competition on several late restarts for the win.

“I have been racing a long time, and this may have been the best car I have ever had,” said Wiltrout. “Those two guys behind me battled hard all last season and I know we all have been working hard over the winter and it should be a fun season.”

Fleegle wins: 'Racing is back'

The final division of the night – Street Stocks – brought maybe the best racing action of the evening.

Casey Fleegle started on the pole, and spins by Aaron VanFleet and Greg Burbridge brought out the first caution before the first lap was even completed. On the restart, Fleegle set sail and had almost a straightaway lead over second-place Mel Wilt when the caution flew for a scary incident when a wheel came off the Harold Meyers car and went into the pits.

Thankfully the pit crews dodged the wheel, and no one was injured.

On the ensuing restart, Fleegle chose to take the high side, putting Wilt to his inside. The two battled door-to-door for almost three full laps before Fleegle finally got the advantage off Turn 2. VanFleet, who had rallied through the field despite the Lap 1 incident, worked his way into second ahead of Wilt with five laps to go, but Fleegle was just too strong and took the win over VanFleet. Wilt held on for third.

“I was a little tight in the center and loose off,” Fleegle said. “That final restart it was some great racing with VanFleet, and he raced me clean and I am sure the fans loved that.

"I just want to say that I’m happy racing is back, and thank everyone at Jennerstown Speedway for making it happen.”

PHOTO GALLERY | Racing is back at Jennerstown Speedway

NASCAR Gander Truck Series winner Cale Gale made the trip from North Carolina to compete for the first time at Jennerstown Speedway Complex on Saturday, and earned a victory in the Late Model division of racing.