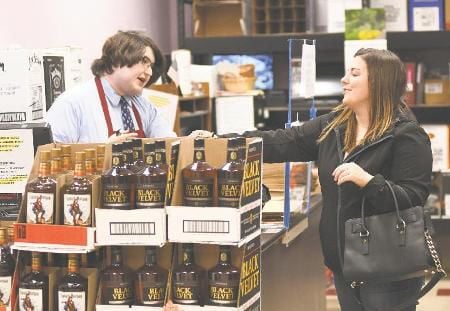 Jacob Lockwood, left, a manger-in-training for the liquor store at Sparkle Market in Andover, prepares to check the driver's license of Lauren Seman, of Orwell, on Tuesday, April 14, 2020. Ohio Gov. Mike DeWine put a directive in place on Monday stipulating that only Ohio residents will be able to buy liquor because of the number of Pennsylvania residents that were coming across the border after that state closed its liquor outlets. 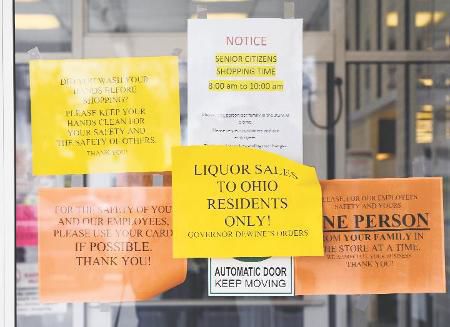 A sign on the front door of Sparkle Market in Andover reminds customers that only Ohio residents are able to buy liquor at the store following an order by Ohio Gov. Mike DeWine.

Ohio Gov. Mike DeWine made the decision Monday to only sell beer and wine to out-of-state residents to prevent Pennsylvanians from coming into the state with the sole purpose of purchasing hard liquor. The order is designed to discourage traffic and help prevent the spread of COVID-19, an illness caused by the coronavirus.

The restrictions may create a sense of safety for Ohioans, but for thirsty Pennsylvanians, last call was at 2 p.m. Monday.

"Pennsylvania residents have been lining up to buy liquor right up until we hung the sign in our store," said Brian Lane, store manager at the Andover Sparkle Market. "A lot of these people are our regular customers and now we have to turn them away."

The news is better for stores like The Hanger in Jefferson, which only sells beer and wine.

"The restrictions do not affect us," said Steve Mihely, owner.

Stores in Ashtabula, Belmont, Columbiana, Jefferson, Mahoning and Trumbull counties are permitted to sell hard liquor only to Ohio residents. All of those counties border Pennsylvania or are split from Pennsylvania only by the West Virginia panhandle.

It also comes amid issues with Pennsylvania's online liquor sales, which began April 1. Pennsylvania Gov. Tom Wolf closed brick-and-mortar liquor stores on March 17 in an effort to stop the spread of COVID-19.