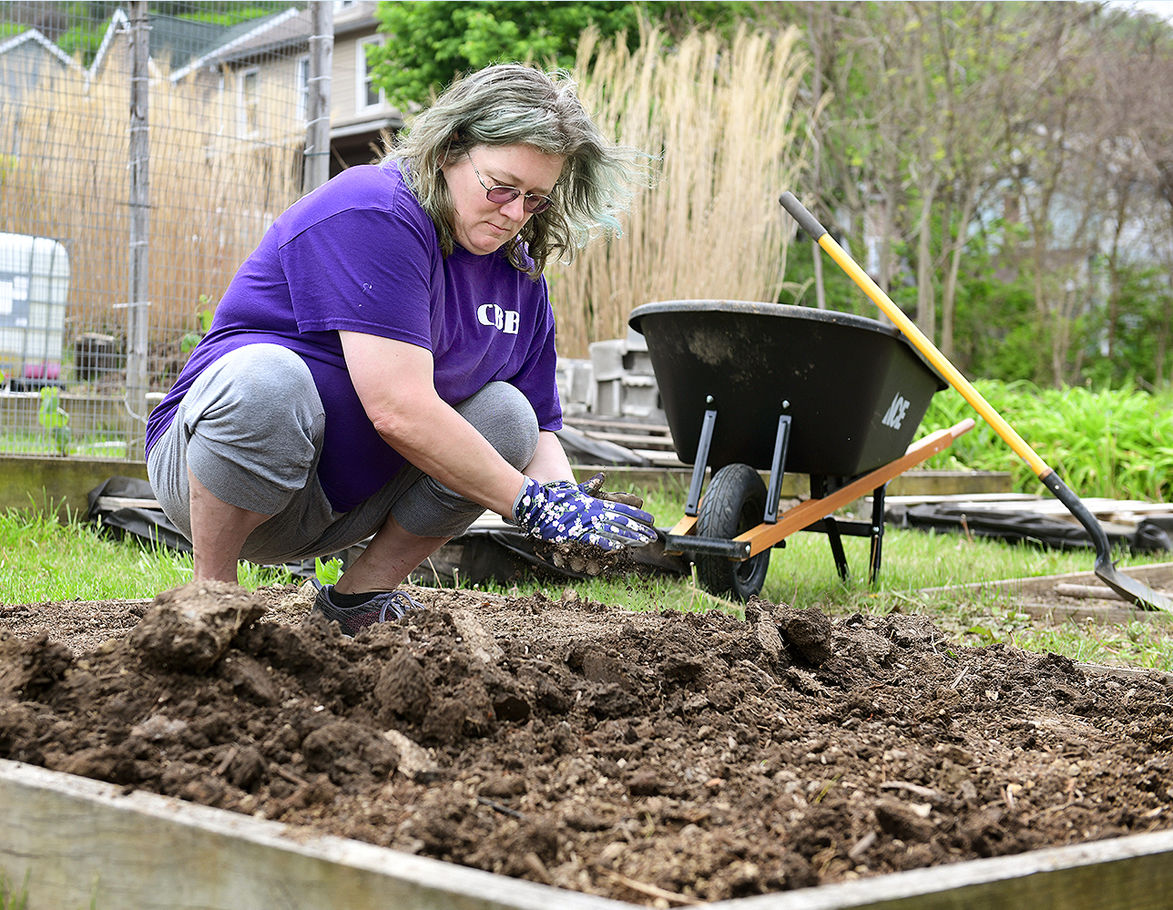 Residents throughout the area are helping others with a little extra support during the coronavirus pandemic. Teresa Cunningham, of Johnstown, has created a community garden in the Kernville section of Johnstown. 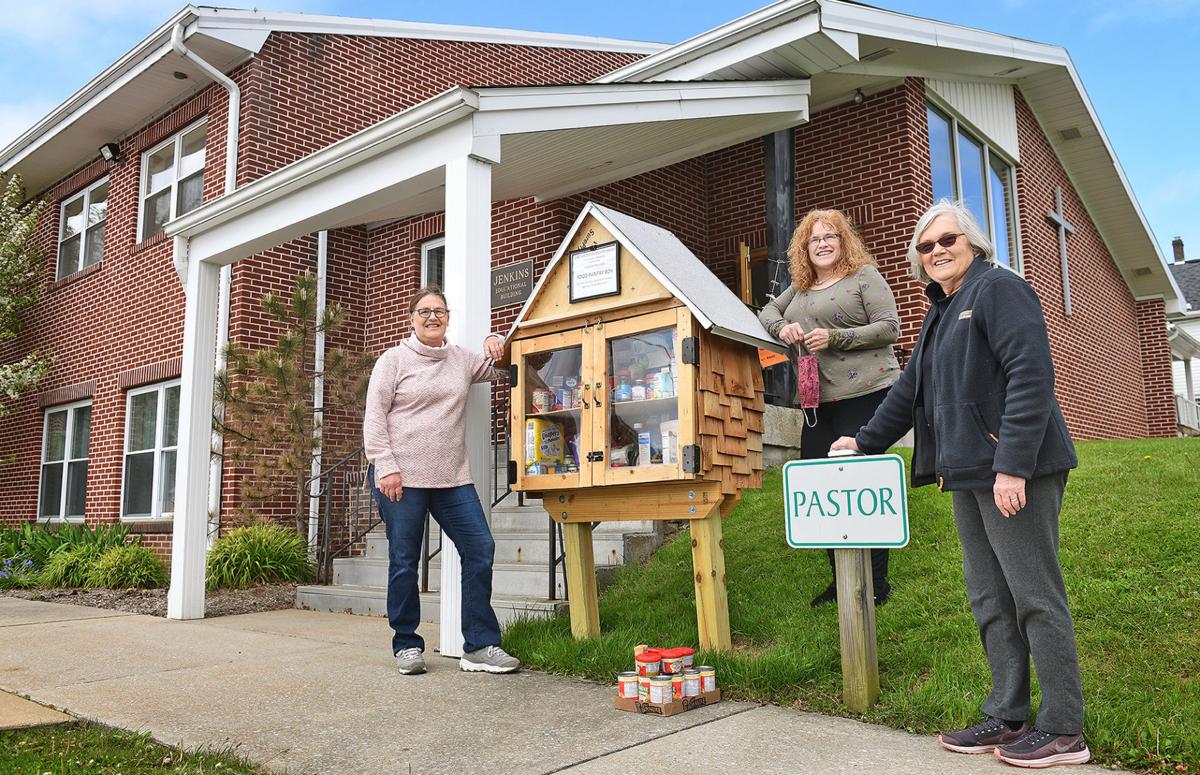 Residents throughout the area are helping others with a little extra support during the coronavirus pandemic. First United Church of Christ members, including (left to right) Becky Klezak, Linda Stiles and Cathy Hostetler, started a food pantry in Ebensburg. 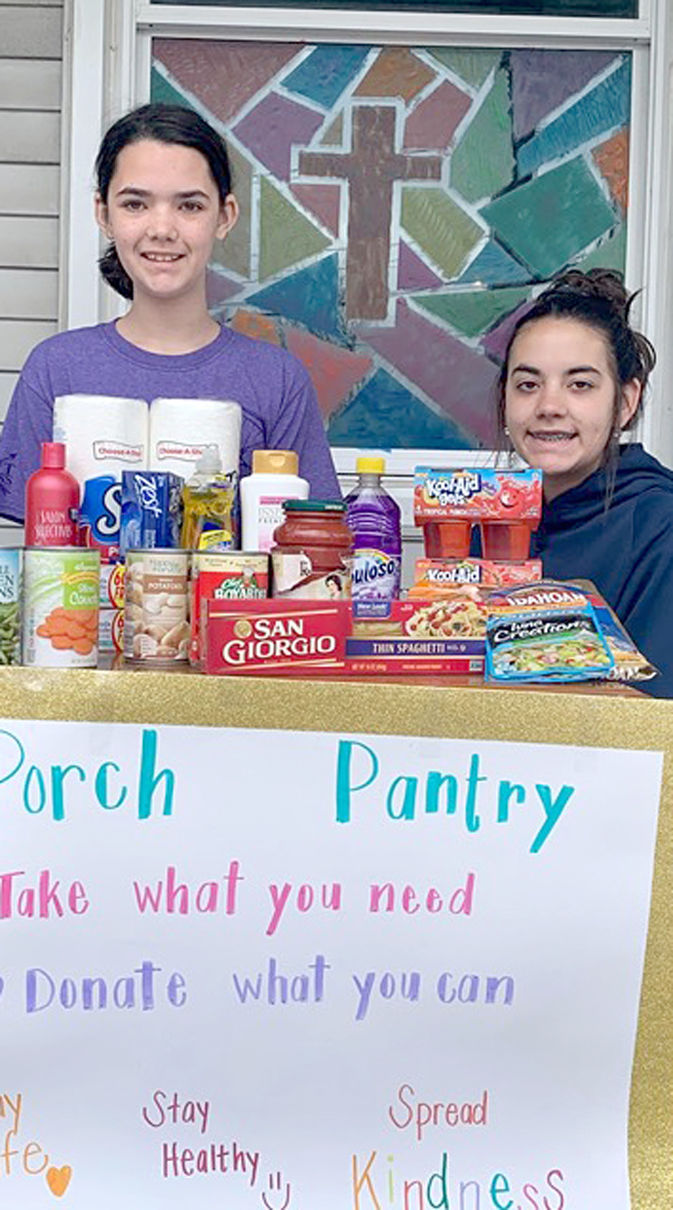 Residents throughout the area are helping others with a little extra support during the coronavirus pandemic. Serenity Cox (left) and Avery Cox, of Gallitzin, offered a porch pantry at their home.

Residents throughout the area are helping others with a little extra support during the coronavirus pandemic. Teresa Cunningham, of Johnstown, has created a community garden in the Kernville section of Johnstown.

Residents throughout the area are helping others with a little extra support during the coronavirus pandemic. First United Church of Christ members, including (left to right) Becky Klezak, Linda Stiles and Cathy Hostetler, started a food pantry in Ebensburg.

Residents throughout the area are helping others with a little extra support during the coronavirus pandemic. Serenity Cox (left) and Avery Cox, of Gallitzin, offered a porch pantry at their home.

Even in the toughest of times, area residents can look toward others for help.

These are the people who are stepping up to the plate and doing good deeds for not only family and friends, but strangers, and they’re hoping that even the smallest of gestures can make a difference during the coronavirus pandemic.

For Tony and Melissa Jackowski, of Ebensburg, creating the Cambria County PA – Neighbors Helping Neighbors Facebook group was a way to give back to those who gave so much to them.

“It goes back to 2018 when we had a critically ill baby,” Melissa Jackowski said.

“He was born 15 weeks early and was 1 pound, 13 ounces, and we spent seven months at Children’s (Hospital of Pittsburgh),” she said.

“The entire county fundraised like crazy for us the whole time so we could stay with him.”

So when the pandemic hit, the Jackowskis wanted to do something for those who needed help.

“There are people who can’t get out, people who need food, and unemployment was being held up for a long time for a lot of people,” Jackowski said.

“There were people really struggling.”

On a whim, the couple created the Facebook group and it quickly took off and now has close to 350 members.

The group is a place where people can post about items they need and connect with those who can help.

In addition, people are sharing items they have such as children’s clothes, diapers and home goods.

“There was a couple of people who needed a washer or dryer and they were able to get that for free,” Jackowski said.

“We’ve delivered food to a couple people and we have run errands for elderly who can’t be out. There is no judgment. If you need help, we are going to try our hardest to get you what you need.”

She said the goal of the group is to bring together the givers and helpers with those who need extra support.

“A lot of people have had things sitting around their house they weren’t using and there’s people who need that stuff but don’t have the money to get it, so this has created a good collaboration,” Jackowski said.

She hopes the group will give people hope that it will be OK and they don’t need to struggle alone.

“It has been incredible to watch everyone come together and help their neighbors – that’s what it’s all about.”

Thanks to a grant, First United Church of Christ, 217 E. High St., Ebensburg, was able to start a food pantry.

“It came about with members of our confirmation class who came up with the idea and along with the pastors, submitted a grant,” said Becky Klezak, church organist, who helps maintain the food pantry.

“With the grant, they were able to build it and put some of the first products in.”

She said with the pandemic, it was the perfect time to get the food pantry up and running.

“We stock it on a daily basis and it really gets used,” said Klezak, a resident of South Ebenburg.

“It’s open to the community and anybody can use it. We have a girl from Colver who comes in three or four times a week to use it and it’s pretty much sustaining her family.”

Nonperishable food is donated by church members and the community.

“It’s amazing the food we go through,” Klezak said.

“I can make a trip to the store and pack it and go back the next day and everything that I bought is gone.”

The food pantry is available daily and is always open.

“We check it every morning, and if we see it’s low, I’ll put out a message on Facebook and then we’ll get five more bags of food,” Klezak said.

In addition, she and another church member cook and deliver food to about 30 older members who can’t get out due to health reasons.

“We deliver a meal every Sunday and it’s nice to just check in with people,” Klezak said.

She said she wanted to be involved with the project because she loves to help people, especially with the uncertainty happening now.

“I’m not one to sit around and do nothing. As a church, our main mission is to help people in the community and also take care of our own.”

Those interested in donating food can bring it to the church and put it in the pantry or leave it by the church doors.

For Teresa Cunningham, her passion for gardening has led to the creation of a community garden that is meant to supply food to the people of Greater Johnstown.

“I moved to Kernville in 2018 and noticed a property down from me was completely overgrown, but saw there were boxes and knew it used to be a garden,” she said.

“It had been abandoned for two or three years, so I took over managing it and pretty much have built it up from ground zero.”

Named Harmony Garden, it is located along Napoleon and South streets.

Cunningham said she wants the garden to be for everybody and is involving area youth groups and organizations in helping to maintain it and learn about basic gardening.

Her church, Conemaugh Church of the Brethren, adopted the garden and members have volunteered to spruce it up.

“People are really helping out and supplying what I need and we are getting it done, so it has been a blessing,” Cunningham said.

Planted in the garden are fruits and vegetables, including grapes, blueberries, onions, potatoes, kale, tomatoes and broccoli.

“I’m also putting in an herb garden that I’m designing myself with pallets,” Cunningham said.

“I want to supply herbs like cilantro and spearmint and peppermint – herbs that you can make tea with.”

Once the garden is ready, residents are invited to come and take what they would like free of charge.

“I’m also going to have a sign saying what needs done if anyone can help.”

Cunningham, who is working at the garden daily, said her hope is that it will serve as a bridge to bring people together.

“No matter your status, we all have a common purpose and that’s to help the community,” she said.

“We’re feeding people, learning to work together and learning about gardening and they can then take that knowledge and start their own gardens.”

In addition to starting the garden, Cunningham handed out protective masks donated to her for three weeks at the CamTram bus station in downtown Johnstown to anyone in need wanting to ride the bus.

In Gallitzin, sisters Avery and Serenity Cox found a way to give back to their community by offering a porch pantry at their home.

“I teach in the Altoona Area School District and they were quick to make sure students were getting food,” Cox said.

“When we were discussing this, I told them about these porch pantries they were doing and Serenity said she wanted to do that.”

Cox said around Easter they started the porch pantry with food from their house.

The girls set out an end table on the porch and made a sign telling people to take what they need and donate what they can.

“We put it on Facebook that we had a porch pantry and a friend of ours who works at the Gallitzin Borough building put it on the borough website,” Cox said.

The porch pantry was offered for a week, and thanks to the generosity of the community, the porch was filled with food.

It was stocked with a variety of nonperishable food items, paper products and toiletries.

“We never dreamed it would be what it became,” Cox said.

“Serenity really took care of it and had an inventory. This really wasn’t me, all I did was give her the porch.”

Food that wasn’t taken by the end of the week was given to a neighborhood family.

Serenity said she wanted to do the pantry to help others.

“Every day we would go out and check to see what people have taken,” she said.

“It felt good doing this because it was making people happier. I think people were thankful that there were people in the neighborhood who wanted to help them through this and we’re always here for them.”

Cox said it was amazing to see her daughters step up and want to help those less fortunate.

“I’m very proud, and service is in them in multiple ways,” she said.