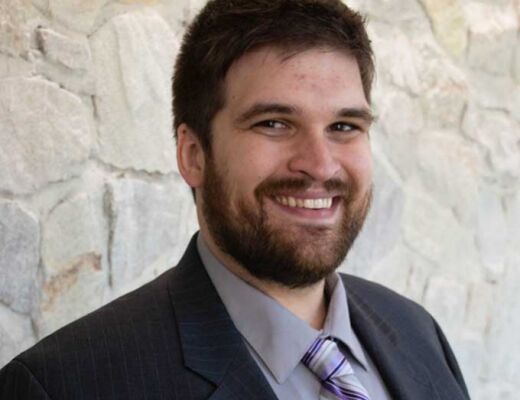 Matthew Tracey is an assistant professor and medicinal chemist at the University of Pittsburgh at Johnstown.

Matthew Tracey is an assistant professor and medicinal chemist at the University of Pittsburgh at Johnstown.

Two scientists from the University of Pittsburgh at Johnstown fielded a range of questions about COVID-19 vaccines Tuesday during the virtual forum “COVID Question,” co-hosted by The Tribune-Democrat and the university.

Jill Henning, associate professor of biology, and Matthew Tracey, assistant professor of chemistry, opened the event by describing the two vaccines currently being given to health care workers and nursing home residents.

Both the Moderna and Pfizer vaccines use manufactured messenger RNA, abbreviated as mRNA. Tracey said the RNA gives a “blueprint” for the body’s cells to make a protein associated with the coronavirus that causes COVID-19.

“By giving us a blueprint for the protein itself, we are giving our bodies a way to recognize what’s going to happen (if the coronavirus gets in),” he said.

Henning explained how the body responds to the vaccine.

“After the blueprint is given to the cells, they make the protein,” she said. “Then that protein is going to be displayed, or presented, on the surface of the cells. Then our bodies will fight it off like any other foreign invader or foreign substance. We have the entire immune response without actually being infected by a pathogen.”

Henning predicted the mRNA approach will be the way future vaccines are developed.

Tracey noted that messenger RNA has been studied for more than a decade with cancer treatment, including numerous clinical trials. No serious side effects have been found.

In developing the vaccine, more than 30,000 participated in clinical trials. Animal studies used massive doses of the vaccines to look for organ damage or other effects, Tracey said.

“There was none observed,” he said. “The mRNA injection is simply a byproduct to make the protein. Once that protein is synthesized, your body breaks down the mRNA.

Several viewers asked about when the vaccine will be available to more essential workers and high-risk populations. Henning said the Pennsylvania Health Department website will update plans as each phase of the program rolls out.

Several asked about the safety of the vaccine for those with various autoimmune diseases, pregnant women and other situations. While in most cases, there is no evidence the vaccine will cause harm, the scientists said the specific populations have not been studied. They advised those with questions to ask their primary care physicians.

Both stressed the importance of getting the required second dose for either the Pfizer or the Moderna vaccine.

“Your body doesn’t always have the best memory,” Tracey said. “The second shot reminds the body to develop a strong enough response.”

That response can cause some reaction to the vaccine, he continued. Some will experience fatigue or a slight fever after receiving the injection. The symptoms are part of the immune system’s response to what it sees as an invader.

“It’s a harmless attack, but your body is still going full-on with the war, even though it’s just jousting at windmills at that point,” Tracey said.

Here are some key points covered during the forum:

• Until more people have the vaccine, its important to continue social distancing and mask-wearing because scientists still don’t know if there can be asymptomatic carriers of the coronavirus among those who had the vaccine, Henning said.

• The second dose must be the same vaccine as the first dose, but a few extra weeks in between doses won’t hurt.

There were several questions the experts said they couldn’t answer because there hasn’t been enough research. The science is changing as more is learned, Henning said.

“You get to peer behind the curtain,” she said.

“This is what science looks like. It’s not like what you see on CSI. You are seeing it with the scientists and the science is evolving.”