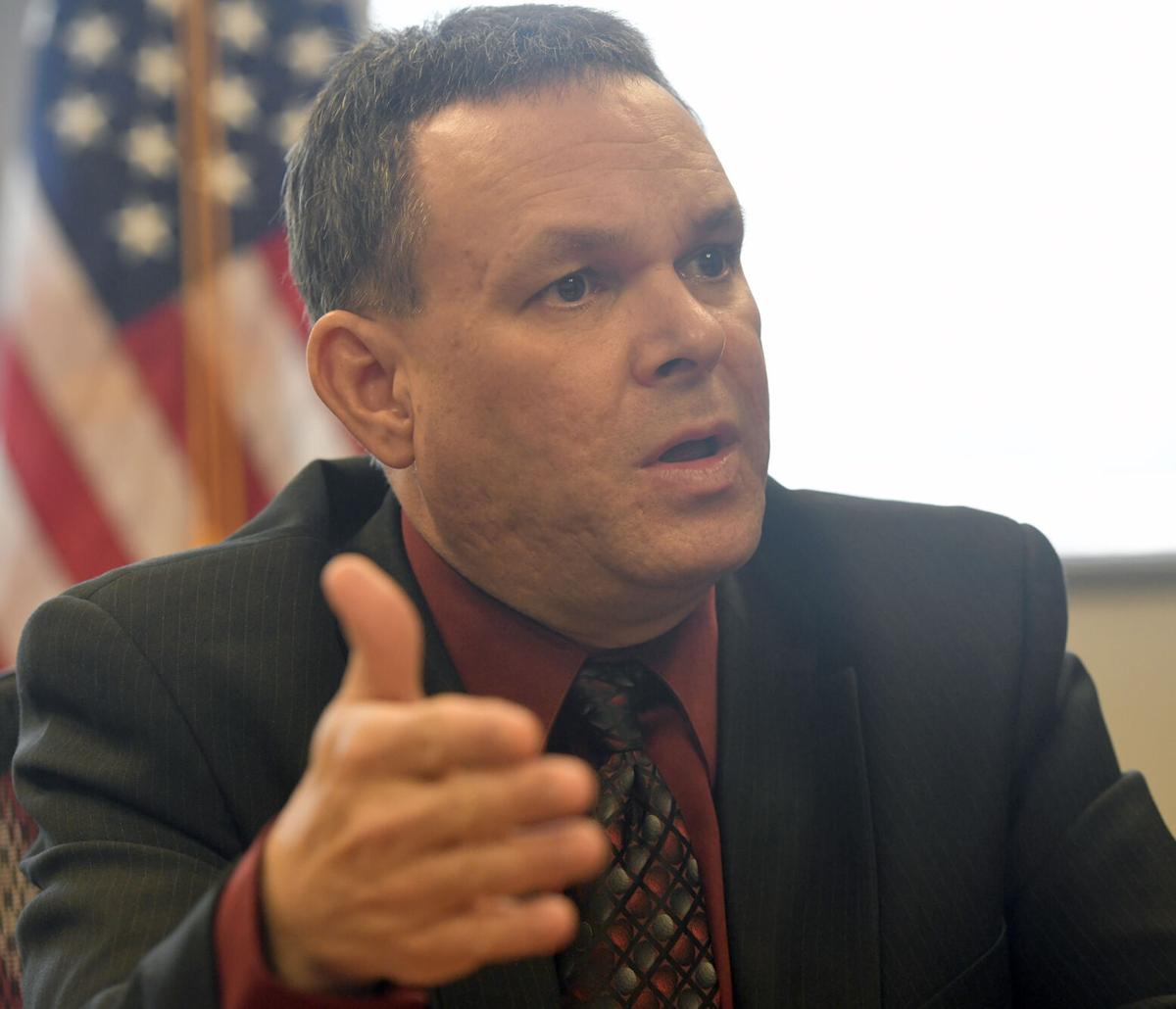 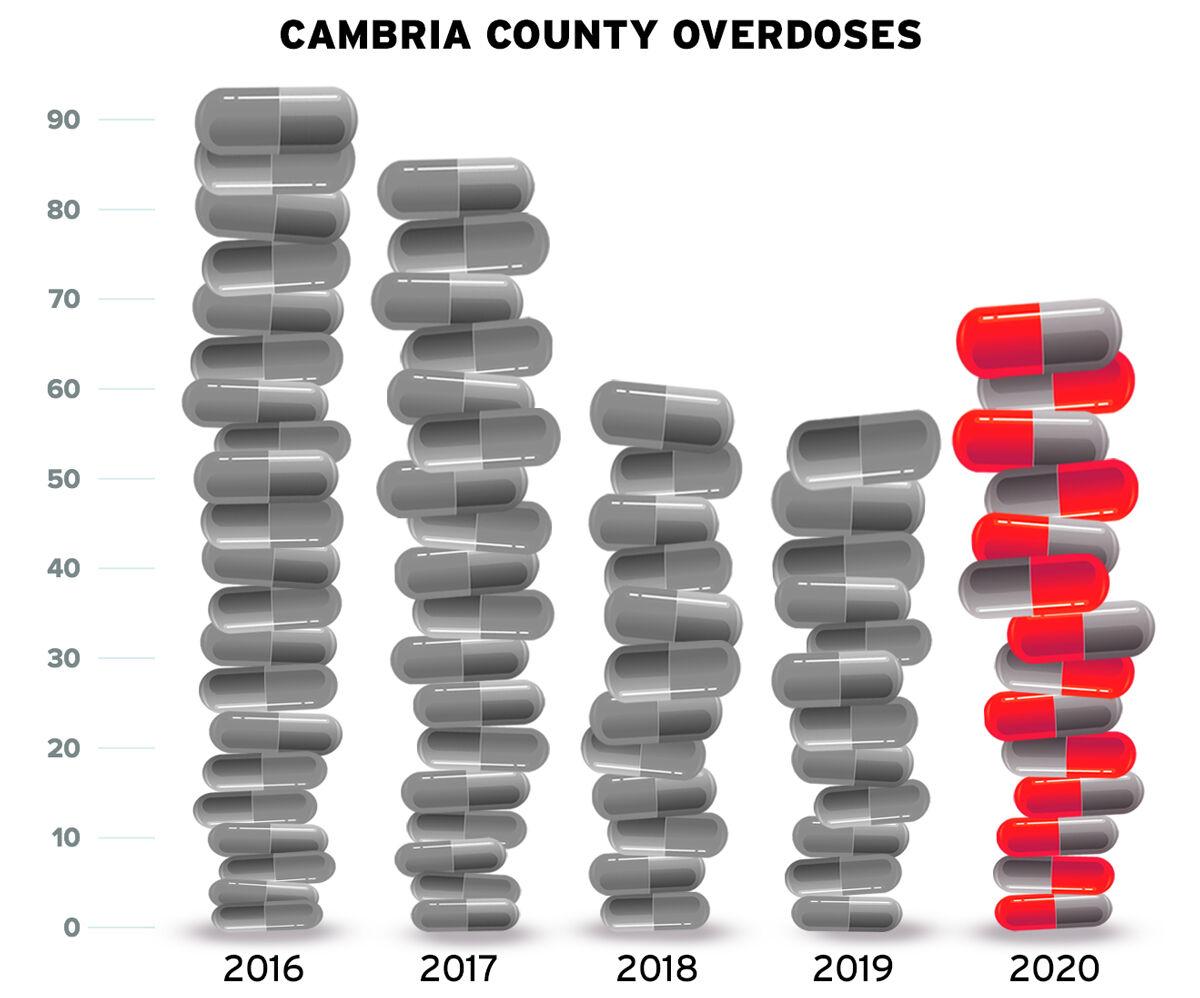 Cambria County’s three-year decline in fatal overdoses came to a halt in 2020, driven by a surge that started following the arrival of COVID-19 last spring.

An analysis of last year’s fatal overdoses also showed that a contrasting blend of drugs was also responsible for more than half of Cambria’s 71 deaths.

Results from the Cambria County Coroner’s Office indicated that a record number of people who died of overdoses had high levels of addictive stimulants such as methamphetamine and cocaine, as well as the opioid fentanyl, a powerful respiratory depressant, in their systems.

And 58 of those deaths last year involved fentanyl.

That’s nothing new in the region.

Cambria County’s rise in fatal overdoses in 2020 mirrored a national trend in the wake of COVID-19’s arrival – and of safety restrictions last year that kept more people indoors beginning in the spring of 2020.

But a new mix of drugs found in a growing number of last year’s overdose deaths also appeared to be a driver behind the increase.

Continuing a trend that started in late 2019, a rising number of cases involved people – either knowingly or unknowingly – ingesting a mix of the lethal painkiller fentanyl and drugs that produce a far different high.

Twenty-one had a mix of methamphetamine and fentanyl, the highly addictive opioid that has ravaged rural America in recent years.

“I think a lot of people are buying something and still think they can just take their usual dose, or usual regimen, and be safe, but you don’t know what might be in that drug anymore,” Lees said.

Cambria County Drug Task Force Chief Detective Kristy Freoni said few drug users realize exactly what they are getting when they hand over cash for their narcotic of choice.

Some, unfortunately, don’t care as long as it’s potent, she said.

The task force coordinates drug buys throughout the county for substances such as heroin, crack cocaine and methamphetamine – “and almost every time, it tests positive for fentanyl,” she said.

“They might be told, ‘Watch out. This stuff is strong.’ But they aren’t being told there’s fentanyl in there,” Freoni said of the opioid, which is 100 times stronger than morphine.

Demand for methamphetamine, for years only a hot drug in the region’s most rural areas, is now countywide, she said.

She noted investigators seized more than 20 grams of the drug during a bust in South Fork this spring. Another arrest in Twin Rocks yielded 70 grams.

In a 2020 interview, then-U.S. Attorney Scott Brady told The Tribune-Democrat that cartels from Mexico and Arizona are flooding pockets of western Pennsylvania with methamphetamine manufactured through Chinese powerful “chemicals” – and spiking it with cheap, even more dangerous fentanyl.

The potent result has replaced the traditional “one-pot” cooking method that people associate with meth, he said last year.

“These organized cartels ... are sending up fentanyl with cocaine and meth because they don’t care what people consume,” Brady said.

“If that’s the nature of what’s being sold on the streets right now,” he said, “we’re going to have more overdoses.”

The percentage of overdose deaths involving methamphetamine and cocaine took a sharp rise in March 2020 and held steady through most of the summer.

Overall overdoses began rising in April, and a month-by-month review shows that that rise also started at a time when state-ordered restrictions to mitigate the spread of COVID-19 went into effect, keeping more people indoors.

The county averaged fewer than five cases per month until April. From April through June, overdoses jumped to an average of eight per month.

Both local and statewide officials took steps to prepare for that increase – programs, online support groups and hotlines that drug users could turn to for support.

The message then remains the same today, Oliveros said.

There’s help available, no matter what the virus and its challenges bring, he added.

“We’re continuing to offer access to all levels of care, whether it’s in-patient treatment or outpatient care at the local level,” he said. “If someone wants in-person support, individual therapy, group sessions or telehealth from a computer, they can do that, too.”

Whether someone is seeking medication-assisted treatment such as methadone or a stay at a drug treatment center, “they can call us and we can get them the help,” Oliveros said.

The Cambria County Drug and Alcohol Program also has funding sources to assist people without health care to cover the costs of those programs – and is reachable at 814 536-5388.

Oliveros said his office can also help people who do have health insurance find treatment through their own coverage. The program revamped its website, www.cambriadrugandalcohol.com, to offer a comprehensive list of support programs and facilities in one location.

The site includes an interactive map of facilities locally and across the state that can provide help, Oliveros said.

The drug and alcohol program is just one of a comprehensive list of groups – including those in the health-care, education, treatment and law enforcement fields – that have been partnering as the Cambria County Drug Coalition to tackle the area’s drug program.

Through partnerships with law enforcement agencies, local police have been carrying the opioid overdose-reversal drug naloxone since 2017.

The county’s total was just 12 a year earlier.

U.S. Rep John Joyce, R-Blair, drew attention to the “heartbreaking” statistic during a Energy and Commerce Subcommittee on Health hearing titled “An Epidemic within a Pandemic.”

“In Pennsylvania, the availability of illicit drugs – and specifically fentanyl – is a crushing blow to our local communities,” Joyce said. “We need to be taking action now to keep our communities safe and to expand access to lifesaving treatments for those with substance abuse disorders.”

Fatal drug overdoses weren’t the only cases that rose in 2020 for Lees’ office.

And COVID-19-related issues were a big part of that, he said.

The pandemic fueled a sharp spike in death cases that Lees’ office handled over the same span – cases that include emergency room fatalities, coronavirus deaths and suicides, he said.

The office averaged 1,857 deaths per year over the past four years. The county had never previously hit the 2,000-death mark until last year, data provided by Lees’ office show.

“Over my 21 years in this office, I’ve never seen anything like that,” he said. “It’s staggering ... and there’s no question, COVID was a big part of it.”

“The numbers,” he added, “speak for themselves.”

Homicide investigations also rose from four to 10 from 2019 to 2020, with the latter number involving three deaths that occurred in neighboring counties, Lees said.

It was a difficult year for his staff of 12, which includes three full-time employees, he said. They had to reexamine how they operate due to the pandemic, donning safety gear to protect themselves from virus exposure and pausing their practice of shaking hands to greet family members.

“It takes a toll on us, too,” Lees said. “Being with people during these difficult moments is part of what we do, but when you’re handling 15 or 20 cases a day sometimes, it’s difficult.

During the height of the surge, county officials approved his request to add an extra per-diem coroner to help manage the caseload, he said.

“I’m proud of the way they have gotten through this so far,” Lees said.

The credit goes to a lot of people on the front lines dealing with this – police, fire, EMS, hospital nurses and nursing home workers “who worked so hard,” he said, “because this could have been worse.”

The global death toll from the coronavirus topped a staggering 3 million people Saturday amid repeated setbacks in the worldwide vaccination campaign and a deepening crisis in places such as Brazil, India and France.