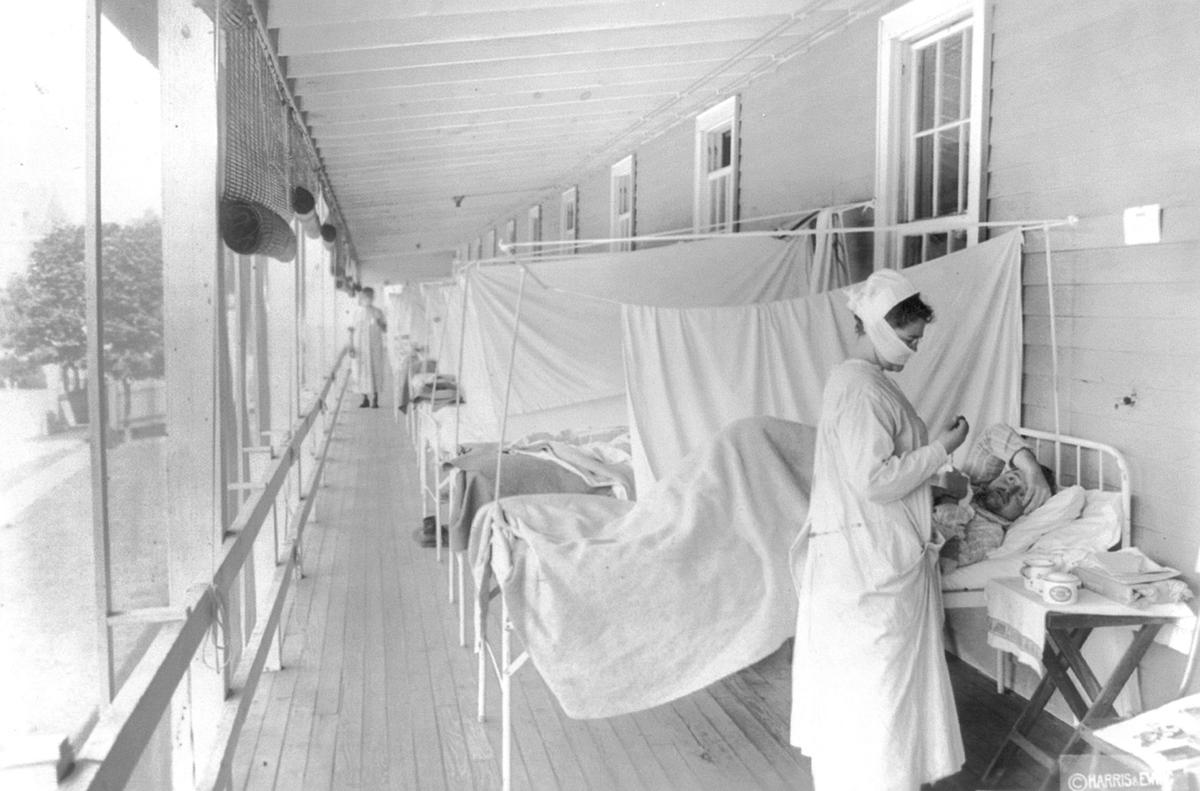 In this November 1918 photo made available by the Library of Congress, a nurse takes the pulse of a patient in the influenza ward of the Walter Reed hospital in Washington. (Harris & Ewing/Library of Congress via AP) 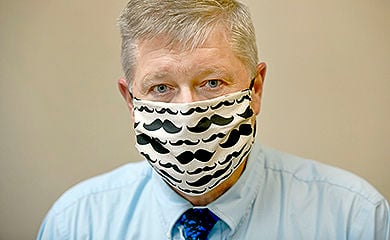 In this November 1918 photo made available by the Library of Congress, a nurse takes the pulse of a patient in the influenza ward of the Walter Reed hospital in Washington. (Harris & Ewing/Library of Congress via AP)

Limitations on travel and public gatherings because of a global health threat.

Businesses pushing for the easing of restrictions.

The coronavirus pandemic of spring 2020?

No, those were the conditions in the fall of 1918, when a strain of influenza – dubbed “Spanish flu” – was spreading around the world, helped along by the movement of soldiers during World War I, and impacting the Johnstown region and western Pennsylvania.

“There are definitely some parallels between then and what we’re seeing now,” said Andrew Lang, curator with Johnstown Area Heritage Association.

Lang said JAHA’s archives show that an October 1918 quarantine in Johnstown was lifted, then quickly reinstated when cases of the disease spiked.

The quarantine then lasted through the Christmas season. “People shopping in downtown Johnstown in December would have faced limits on how many people could be out, and how many could be in stores at the same time,” Lang said.

A January 1919 article in The Johnstown Democrat warned that “families must take more precautions than they have been doing” – foreshadowing another flu surge that spring.

“That highlights the dangers of lifting this thing too early,” Lang said.

Comparisons between the two pandemics diverge when you get to actual numbers for the sick and dying – thanks largely to much-improved health care techniques spurred by the influenza and a better understanding by modern scientists of how such diseases spread.

Estimates show that at least 20 million and maybe more than twice that many died around the world in 1918-19, including 675,000 in the United States.

Lang noted that 16,000 people perished in Philadelphia, where a war bonds parade was held in September despite directives from the medical community to avoid large crowds.

In his report “The ‘Spanish Lady’ Invades Western Pennsylvania,” Westmoreland County Community College faculty member Thomas Soltis said 500,000 people in Pennsylvania were infected, and the state averaged more than 1,000 deaths per day in October 1918, when the flu was at its peak.

Johnstown suffered an estimated 500-600 deaths from the flu, Lang said, “based on what the figures in Pennsylvania were, and the fact that there was a number quoted – 229 – for December deaths.”

“Johnstown hadn’t taken any quarantine action until almost the middle of October, when things started getting pretty bad,” Lang said, adding that “the coal towns in northern Cambria County were very hard-hit.”

In Portage, 253 lives were lost, Lang said. The town’s population was 5,000 in 1918, thanks to a boom in previous years brought by mining and industry.

That matches a recent report by The Times West Virginian newspaper in Fairmont, West Virginia, where concerns were raised about the spread of COVID-19 among coal operation employees working in close quarters.

Soltis’ research shows that on Oct. 4, 1918, state Commissioner of Health Dr. B.F. Royer ordered businesses closed – even saloons – and required all funerals to be small and private.

On Oct. 12, Soltis wrote, news outlets were reporting that Johnstown was a “closed” city – with no church services and “all public accommodations” discontinued. The city had seen “45 new cases in one day.”

The same day, Soltis wrote, the Pittsburgh Press said the flu epidemic was “curtailing the production of coal” in a report out of Altoona.

In the Summer 2018 edition of “Pennsylvania History: A Journal of Mid-Atlantic Studies,” published by the Penn State University Press, James E. Higgins explored the impact of influenza.

“Pennsylvania and its communities experienced an especially violent epidemic,” Higgins wrote in “A Lost History: Writing the Influenza Epidemic in Pennsylvania, 1918–1922.”

He wrote: “With more than 60,000 dead, the commonwealth lost more lives than any other state. Furthermore, the three worst-hit major cities in America were Pittsburgh, Scranton, and Philadelphia. ... The coal mines and steel mills that compromised the respiratory health of so many, to say nothing of the deplorable standards of living tolerated by the state in the coal patches and mill towns, added strength to an attack by history’s most virulent influenza virus.”

Higgins added: “Indeed, with the exceptions of Johnstown – which suffered more deaths during its great flood in 1889 than from the flu – and Philadelphia, whose loss of life during the 1,793 yellow fever epidemic amounted to 15 percent of its population, the flu in autumn 1918 caused the greatest loss of life experienced by every single Pennsylvania community.”

He wrote that from October 1918 through March 1919, “the epidemic killed more Pennsylvanians than were lost during the two world wars and the conflicts in Korea, Vietnam, Afghanistan and Iraq combined.”

Last week, University of Pittsburgh faculty received the Spring 2020 issue of “PITTMED” an emailed newsletter, which contained an article – “Purple Death: When the 1918 flu pandemic came to Pittsburgh” – by Edwin Kiester Jr.

He revisits the impact for the university – including a canceled football season just when coach Pop Warner was building a powerhouse, then a ban of gatherings where the flu might be spread. Seniors at Pitt’s medical school were called to duty as early hospital interns.

Kiester reports that 23,000 people were sickened in Pittsburgh and 5,000 died.

“During the worst days, one Pittsburgher fell ill every 70 seconds, and someone died every 10 minutes.”

And, then as now, “Pittsburghers at first complied with the restrictions, then began to chafe under them.”

But much was learned from the 1918 influenza – around the world and at Pitt, where a team led by Jonas Salk developed the first successful vaccine for polio in 1955.

Pitt is now among the leading universities in the push for a COVID-19 vaccine, and “researchers were able to act quickly because they had already laid the groundwork during earlier coronavirus epidemics,” Kiester wrote.

And just three decades removed from the 1889 flood, Johnstown was home to Conemaugh Memorial Medical Center – which helped the region get through the influenza outbreak and continues to provide care during the coronavirus pandemic.

“Conemaugh was not only the hospital just for the city of Johnstown, but for a lot of the larger area,” Lang said. “People in other parts of the area would have been brought to Conemaugh for treatment.”

It’s Easter Sunday, and until a few weeks ago, I presumed this day would involve dinner with the family, church in the morning, then visiting with my mother at her nursing home room.