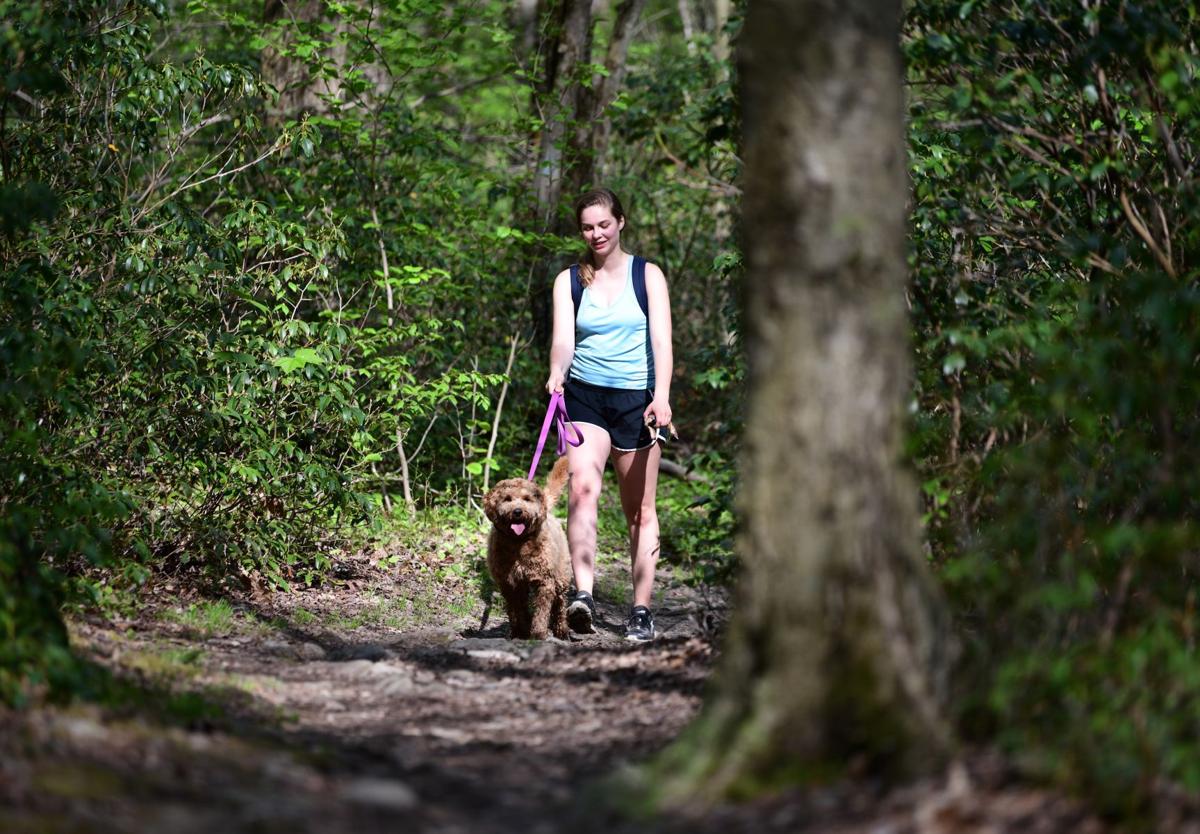 Kendra Biery of Jennerstown and her dog Maisy are shown on a section of the Laurel Highlands Hiking Trail in Jenner Township, Somerset Co., Monday, May 25, 2020. 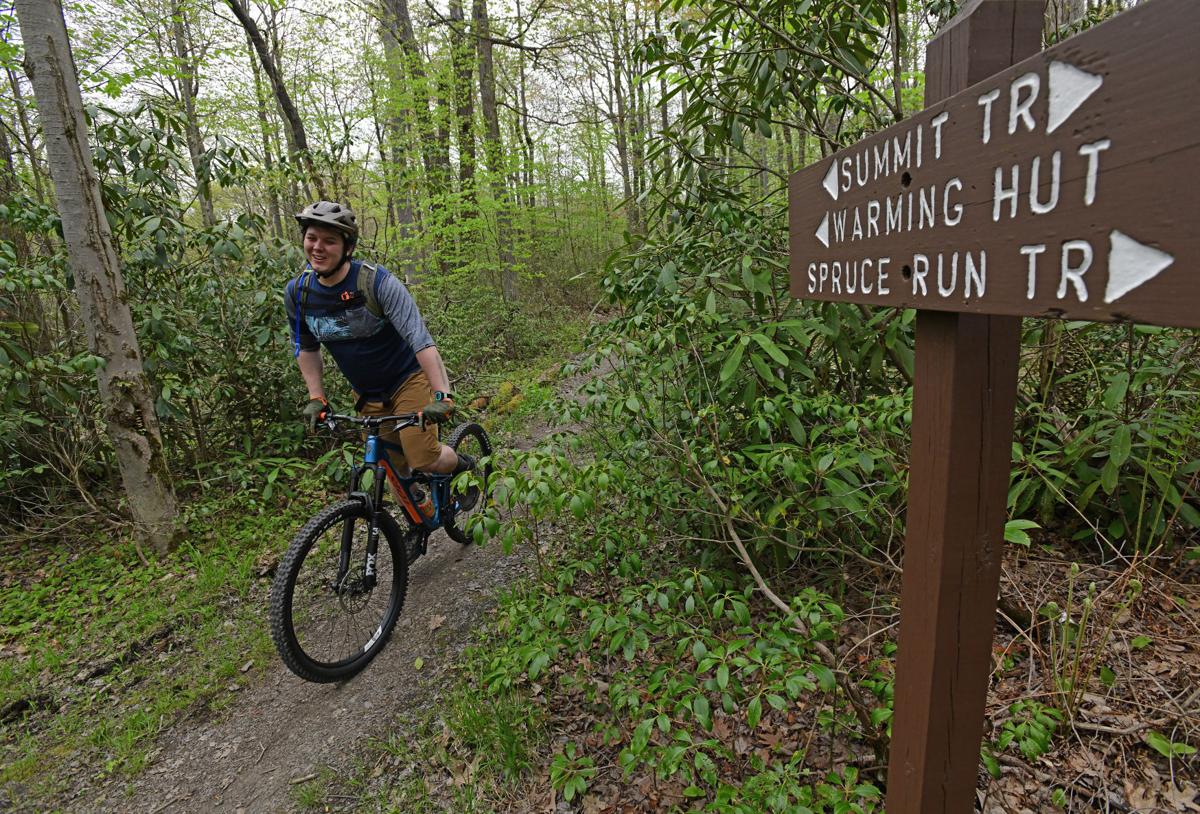 Jim Stenger of Johnstown,PA., rides his mountain bike on the Summit Trail in the Forbes State Forest on Laurel Hill in Jenner Township, Somerset County, Wednesday, May 27, 2020. 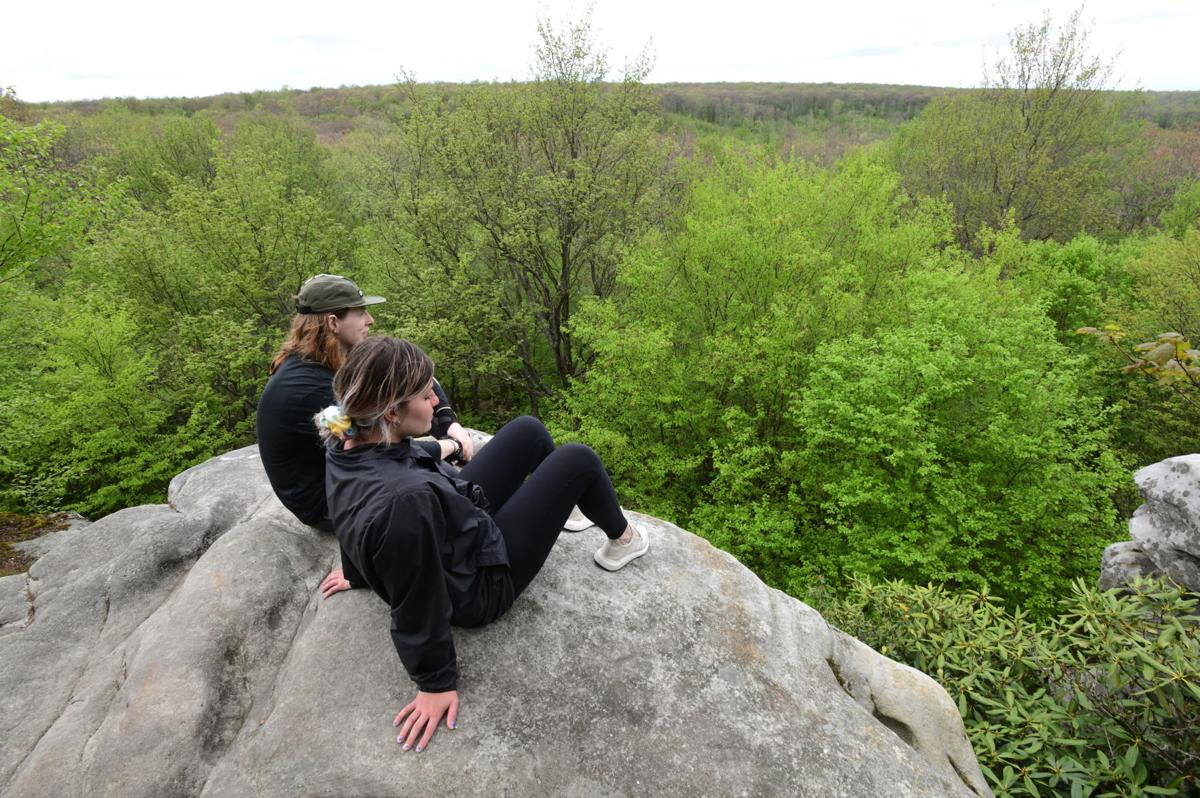 Dakota Gary of Somerset, left, and Hope Kennelty of Belle Vernon take in the view from Beam Rocks in the Forbes State Forest on Laurel Hill in Jenner Township, Somerset County, Wednesday, May 27, 2020.

Kendra Biery of Jennerstown and her dog Maisy are shown on a section of the Laurel Highlands Hiking Trail in Jenner Township, Somerset Co., Monday, May 25, 2020.

Jim Stenger of Johnstown,PA., rides his mountain bike on the Summit Trail in the Forbes State Forest on Laurel Hill in Jenner Township, Somerset County, Wednesday, May 27, 2020.

Dakota Gary of Somerset, left, and Hope Kennelty of Belle Vernon take in the view from Beam Rocks in the Forbes State Forest on Laurel Hill in Jenner Township, Somerset County, Wednesday, May 27, 2020.

The American Hiking Society will celebrate its 28th annual National Trails Day on June 6, encouraging people to enjoy a trek in the great outdoors. The Maryland-based nonprofit created the event to celebrate the country’s trail system, and this year is asking hikers to “pledge, act and connect.”

Kate Van Waes, executive director of the American Hiking Society, said the event should be a day to get outside and enjoy a trail, even if that means paddling a canoe or riding a horse.

“Anybody can use any type of trail, from water to a single track trail,” she said. “It’s about getting outside and celebrating and enjoying this group event.

“But it’s also about promoting stewardship of our trails and waterways – helping to clean them up and maintain them.”

AHS is asking folks to share what actions they took, and their outdoors experiences that day, on social media by using #NationalTrailsDay.

“I think there’s a great opportunity this year, especially with people paying more attention to social media right now,” Van Waes said, “and more and more discovering how important the outdoors are, because they realize they’ve been stuck at home.

“We think it has a huge potential.”

Each year, AHS creates an advocacy focus idea, such as 2019’s “hunting for trails” postcard campaign, as well as a pledge.

“Last year, the pledge was to set the world record for the number of people out improving a trail, across the country, and we reached over 41,000 people,” Van Waes said, claiming the event reached 19 million people on social media.

Van Waes said this year the organization’s idea was affected by COVID-19.

But, she still encourages folks to get outside, use a trail, and especially take 10 seconds to fulfill a pledge on the website.

“It’s a day to reflect on how much the outdoors mean to you, especially when you’ve kind of been in isolation in your home during this pandemic,” Van Waes said. “And then recognizing that not everybody has that access. Not everybody has natural and safe space near them. And so, it’s also a day to take action.”

Van Waes said those taking the online pledge are offering small actions that she hopes will lead to big changes.

“Basically in that pledge, you’re saying, ‘I’m going to take one action in 2020 to help preserve and protect public land and to help promote access for all to quality natural spaces.’ “

Those actions include links to voter education sites that encourage trail-users to endorse state and federal political candidates that she said, “will help promote, protect and preserve public lands the most.”

Other actions provide links to support legislation such as the Great American Outdoors Act, the Outdoors For All Act and the Transit to Trails Act.

“All three of those really are the most important pieces of legislation on the hill right now concerning public lands and access,” Van Waes said.

She said that when trails become a priority for local governments, conservation soon follows.

“When that happens and you have those wonderful trail systems that are maintained, and are kept up, and are safe,” she said, “people just tend to start to value them more, and value the outdoors more, and become natural conservationists.”

Cliff Kitner, executive director of the Cambria County Conservation and Recreation Authority, said that due to the pandemic, people have discovered just how vital his county’s 46 miles of trails have become.

“It’s not been a big increase. It

has been a huge increase,” he said, as families used to attending after-school events instead have been bonding by taking advantage of the free recreation offered by trails.

Kitner said the county’s three main trails – Ghost Town, Path of the Flood and Jim Mayer Riverswalk – are all getting more attention these days.

“We have very high-quality trails,” he said. “They don’t designate them as National Recreation Trails if they’re not good trails.”

Kitner hopes that when the pandemic ends, people will remain loyal trail-users, as there are many projects in the works.

Beyond completing the Path of the Flood Trail from the breast of the South Fork Dam to the Stone Bridge in downtown Johnstown, Kitner has big dreams for the area’s trail system, especially connecting the Flight 93 National Memorial, Johnstown Flood National Memorial and Allegheny Portage Railroad National Historic Site to Ground Zero in New York City, and the Pentagon in Washington, D.C.

“Obviously we want to connect every single one of our trails as part of the 911 Memorial Trail,” he said.

Smaller trails are just as important though, said Kitner, who spearheaded the walking trail at Roxbury Park while serving as Johnstown’s recreation director.

“It’s not just about wellness,” Kitner said. “It’s about bringing people into the area.”

Brad Clemenson,who serves on the board of the conservation and recreation authority, and the September 11th National Memorial Trail Alliance, applauds the AHS advocacy moment.

“In general, I think it’s a nice idea, and especially this year with the COVID-19 situation, all of the trails are getting a lot more attention,” Clemenson said. “(There are) many more users, and new users who are just discovering the trails, so I think National Trails Day is a nice celebration that can call more attention to the need to continue our progress in building and expanding the trail system, so even more people can have access to healthy forms of recreation.”

“Thirty years ago we didn’t even have a trail system, and now the Ghost Town Trail is the Trail of the Year,” Clemenson said, adding that construction of the Quemahoning Trail has now entered Phase II.

“I think the Johnstown area is becoming a destination for trails, and that trend is going to pick up a whole lot more as the September 11th National Memorial Trail sections get connected through Johnstown, as well as the Mainline Canal Greenway getting connected from Harrisburg to Pittsburgh,” Clemenson said.

“There’s some real national significant activity going on, with Johnstown in the middle of it,” he said. “That will create a lot of buzz about our trail system in this area, and it will generate more tourist dollars and make this a more desirable place for people to live, work and play.”

The following are popular hiking trails in the area:

• Allegheny Portage Railroad National Historic Site’s Six to Ten Trail: 7.7 miles. Follows the path of the former railroad’s No. 6 through No. 10 inclined plane “levels” on the eastern slope of the Allegheny Front from the historic site to the village of Foot of Ten.

• Ghost Town Trail: 46 miles. DCNR’s Trail of the Year, from Ebensburg to Josephine and Belsano.

• Lost Turkey Trail: 26.5 miles. Babcock Picnic Area on Route 56 east of Windber, to Blue Knob State Park. Intersected by Route 869, the trail is rated as difficult from that road to the summit of Blue Knob.

• Path of the Flood Trail: 9.1 miles. Ehrenfeld to Franklin.

• Staple Bend Tunnel Trail: 4 miles. An “out and back” trail to the country’s first railroad tunnel, accessed at Mineral Point, or 3-miles out and back from Franklin ballfields.