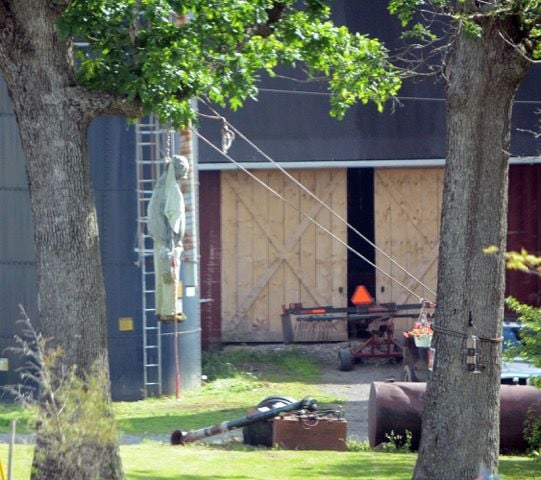 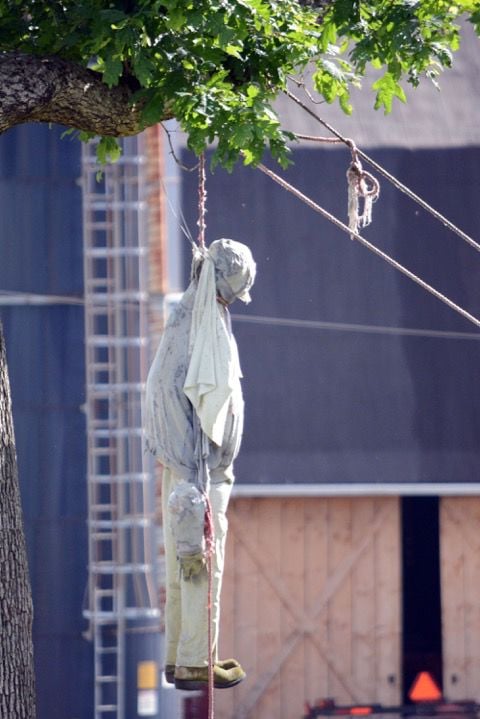 GRANTSVILLE, Md. — A figure hanging by its neck from a tree limb in the yard of a Grantsville home has been a disturbing display visible to travelers along Chestnut Ridge Road for some years.

For just as long, some residents and local officials say they've been unhappy with its presence, but are unable to do anything about it.

Pictures have made the rounds on social media in years' past, and have garnered some media attention previously.

The most recent crop of photos appear to have started Wednesday on Instagram, when a user posted pictures, saying he or she saw the display while traveling through northwestern Maryland.

That post made it to Twitter, where on Thursday the photos caught the eye of U.S. Rep. David Trone, who represents Garrett County as part of Maryland's 6th District. Trone called the display a "racist, abhorrent hanging effigy," and said he contacted local leaders to offer his support for taking it down.

Efforts by The Times-News to contact the owner of the property on Thursday and Friday were unsuccessful.

'Be a good citizen'

Maryland Delegate Wendell Beitzel, who represents Garrett County and a portion of Allegany, said Friday he was familiar with the display as an ongoing issue throughout the years.

“Somebody came by and saw it and … I got a call about it, too, back then," Beitzel said. "I didn’t call him, but I checked to see if there was anything in the county’s rules or regulations that would require him to remove it. … Apparently, there isn’t anything that can compel him to remove it.”

Beitzel said his understanding was that the initial public outcry just angered the homeowner, who in turn became “bull-headed and won’t remove it.” That's unfortunate, Beitzel said, and despite his personal distaste for the display, he said that the homeowner's freedom of speech is protected by the First Amendment.

"I would suggest to him that he be a good citizen and good neighbor and remove it, but apparently he’s got a different opinion about that," Beitzel said.

"Truthfully, I don’t like it. I don’t think people in the community should do things like that. But we have people who have different opinions about things, and so we’ve got to respect their right to do it, too. I guess a whole bunch of people died to give us the liberties we have, and we just can’t willy-nilly take those away.”

State Sen. George Edwards also recalled seeing the hanging man for several years, but said he remembered it first being erected around Halloween. Over the years, he said he has received “two or three emails” from concerned citizens about it.

“I don’t think it’s appropriate,” Edwards said. “You’d have to ask the person who owns it why it’s up and why it stays there.”

With racial tensions high in the wake of the custody deaths of George Floyd in Minneapolis and Rayshard Brooks in Atlanta, Edwards said he believes the display should be taken down. But as it’s private property and no law is being violated, the homeowner is within his rights should he choose to leave it there.

“I would say probably most people around here don’t think it’s a good idea for it to be up, and hope that he would take it down,” Edwards said.

'Not a welcoming sight'

The president of the Garrett County Chamber of Commerce, Nicole Christian, spoke emphatically against the display.

“We absolutely do not condone it, and are pretty disgusted by it,” Christian said. “We wish the owner would remove those effigies, because it’s certainly not a welcoming sight when you come into the county.”

Christian noted the different origin stories assigned for the display, and said she doesn’t know which one is correct.

“It is my understanding that it’s not racially motivated, but it looks bad nonetheless and we would prefer it be taken down,” Christian said. “Hopefully the owner will understand it’s not presenting a good image of Garrett County. I can tell you it is not representative of the county, either. We just wish that he would understand that and remove it.”

Shawntia Humphries, a former Allegany County resident and Allegany College of Maryland student who has since moved to Washington, D.C., contacted the Times-News to share her thoughts when she first saw the pictures. As a Black woman and former resident, Humphries said she was deeply affected by the sight.

“It really hit home for me because I lived in Cumberland for two years, and know there’s a lot of Black kids and people who ride through there every day,” Humphries said. “That would be scary for me, and for anybody.”

Humphries noted that the man who shared the photos most recently seen by Congressman Trone and others is white: “If it affected a white man, it would definitely affect a Black person riding through there.”

She added: “It really scared me. I lived in Cumberland and voted in Cumberland. It was emotional for me. Any child could ride through there today and be distraught. I wouldn’t even want to go back to school up there. Imagine you’re Black, you’re just getting out of your mom’s house and going to college up in Cumberland and you’ve got to be up there by yourself, and you see that. You’d feel like your life was in danger.”