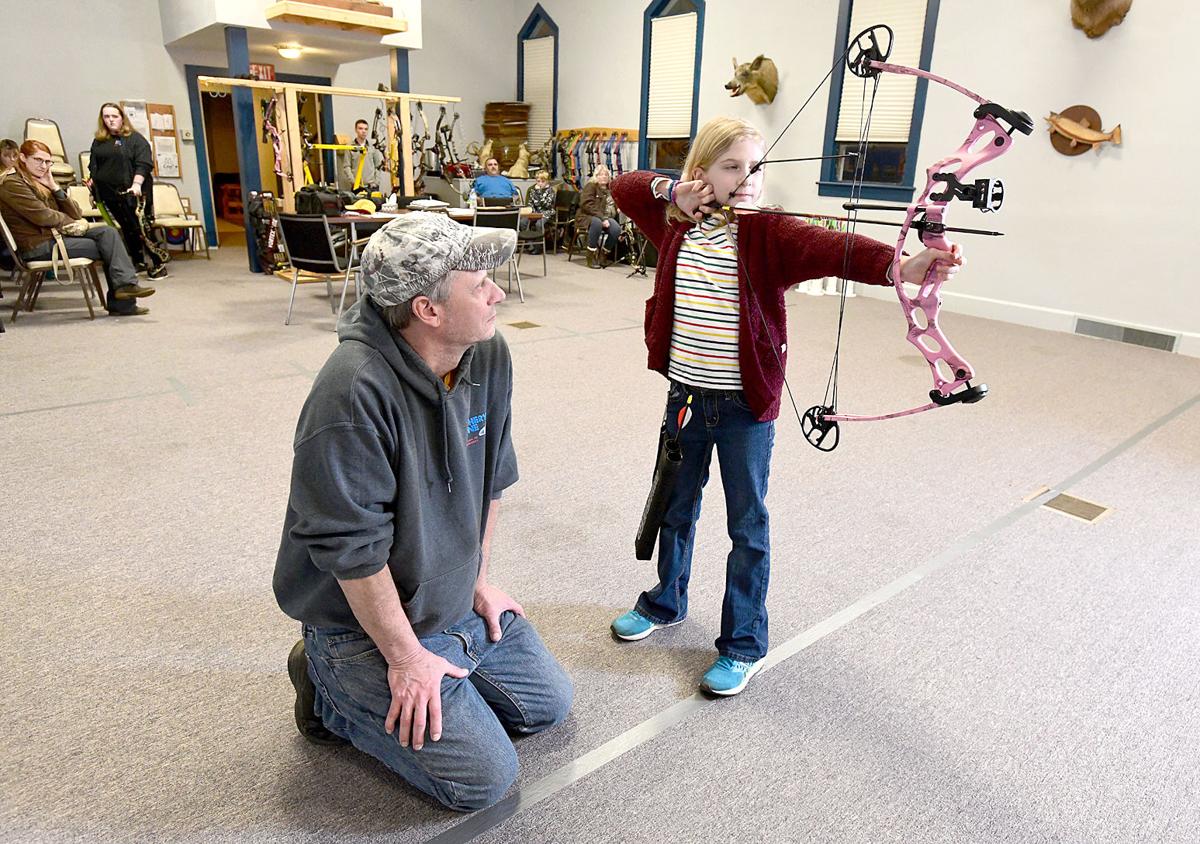 The Rev. Frank Young works with Eliza Mood, 10, of Johnstown on her archery technique at Sportsmen Fellowship Ministries in Jerome, Somerset County, on Tuesday, Feb. 4, 2020. 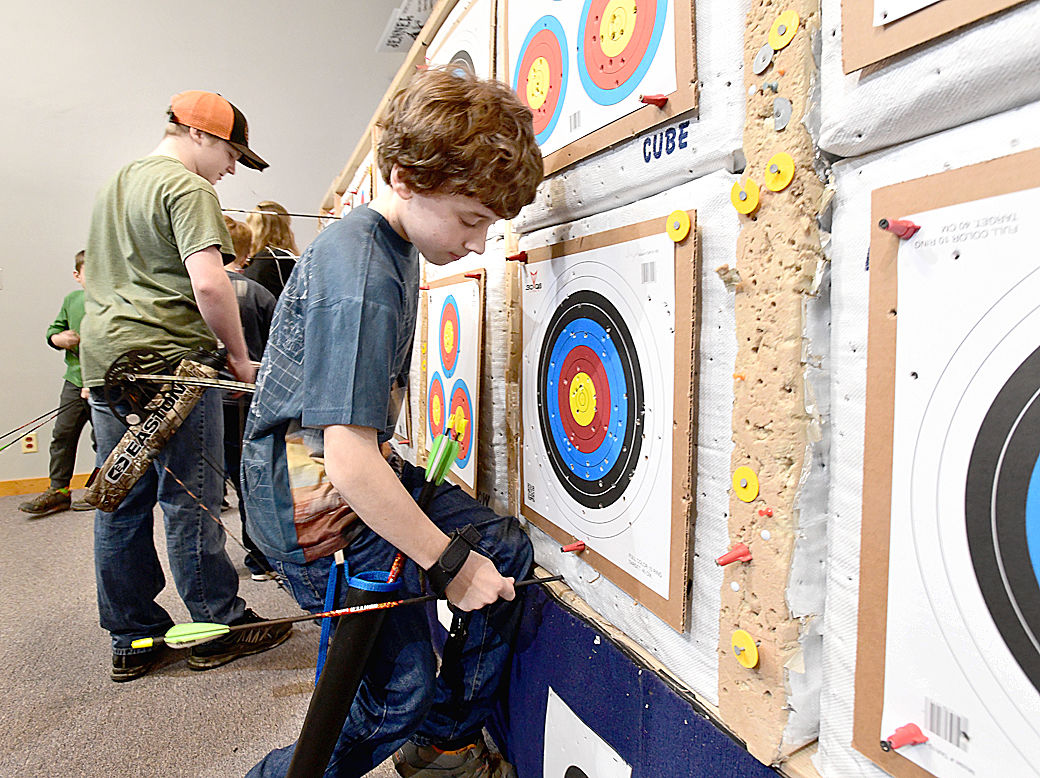 Steven Honecker, 11, of Hollsopple, removes his arrows from the target at Sportsmen Fellowship Ministries on Tuesday, Feb. 4, 2020. In the background is Landan Thomas, 12, of Davidsville.

The Rev. Frank Young works with Eliza Mood, 10, of Johnstown on her archery technique at Sportsmen Fellowship Ministries in Jerome, Somerset County, on Tuesday, Feb. 4, 2020.

Steven Honecker, 11, of Hollsopple, removes his arrows from the target at Sportsmen Fellowship Ministries on Tuesday, Feb. 4, 2020. In the background is Landan Thomas, 12, of Davidsville.

Greek philosopher Aristotle wrote that virtue is a choice to aim one’s actions between two vices or extremes as a disciplined archer aims for the mark.

Today in Jerome, the Rev. Frank Young’s mix of archery and Christian ministry is growing in popularity among children and their families who want to become spiritually centered while also having fun shooting a bow and arrow.

“It’s grown so fast it caught me off guard,” Young said.

Any day of the week at Sportsmen Fellowship Ministries Inc., 130 First St., Jerome, the indoor archery lanes are filled. Children draw bows in 12 lanes with targets between eight and 20 yards away, depending on their skill level.

But when Young left his post as pastor of a Tire Hill church in 2016 to open the nonprofit ministry/ indoor archery range, participation was low, he said.

“We started off one to two days a week,” he said. “Some of those nights no one showed up. Now we are open seven days a week. We have 80 children from 13 different school districts. When we started, we were lucky to get 10.”

Young attributed the group’s growth to word of mouth and social media, and the sacrifice of his lawn care business on the side.

“It really took off in November when I made a commitment to sell my lawn care business and become committed full time as executive director of Sportsmen Fellowship Ministries,” he said. “I felt this is where God was calling me.”

Parents attend shooting sessions along with their children, Young said.

Jenny Hostetter’s 12-year-old daughter never shot a bow and arrow until she started attending Sportsmen Fellowship Ministries, which is at the former Holy Cross Catholic Church.

“She started out in beginner archery, now she is in advanced sessions. It’s given her a way to grow self-confidence, and they do a great job with devotions,” Hostetter said.

Hostetter said the archery events are not like other kinds of sporting events where parents become heated and yell.

“It’s not like that. I think everyone there is because they love the Lord and they do it out of love. And Frank says that’s why we are there, to love the Lord and also to pick up archery skills. That puts perspective on it,” she said.

The ministry’s community and financial support from volunteers and businesses is also growing.

One of the ministry’s donors is Tony Tazza, owner of Richland Archery Zone.

“Frank is really doing great things down there, touching adults and children alike,” Tazza said. “He’s having to add extra nights to accommodate the extra people.”

Programs at the indoor range, include leagues for adults as well as children.

“It’s really taking off and promoting archery in a really positive light. And not only that, but he is also promoting Christianity. Each session has a little prayer session that is very important,” Tazza said.

Young, 57, is an ordained minister of the Church of the Brethren. Although archery is the focus of his current ministry, it also includes fishing, pheasant hunting and rabbit hunting trips, he said.

“We want kids to develop a prayer life, where they are helping other kids,” Young said. “So they are mentoring others who may be younger. This gives them a place to belong.”

Children ages 6 to 17 participate in the archery program, Young said. Adult volunteers coach and monitor. Children shoot for half an hour, then they take a break for devotions and a snack, and go back to shooting.

“They are really competing against themselves, trying to beat their score,” he said.

“What parents told me is they appreciate the encouragement they get from volunteers. The place explodes when kids hit their target.”

Then he worked as pastor of a church in Tire Hill, but his Sportsmen Fellowship Ministries has renewed his passion for working with children, he said.

When the 43rd annual Special Olympics Pennsylvania Winter Games kicks off at Seven Springs Mountain Resort on Sunday, Gary Johnson will be there.