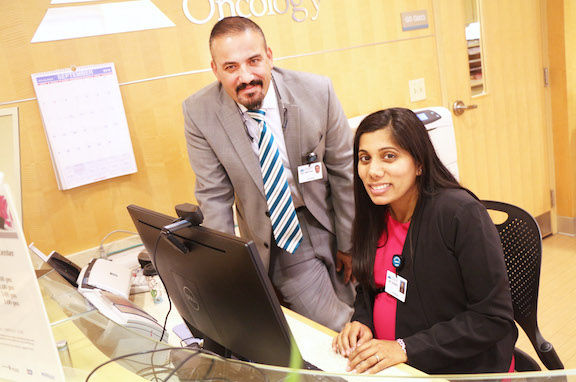 “There is more hope in the world of cancer,” Medical Director Ibrahim Sbeitan said at Conemaugh Cancer Center in Johnstown. “We don’t lose as many of our patients to cancer. It’s much better for cancer than 10 years ago.”

One of the new treatments was proven through clinical trials that included patients with UPMC Hillman Cancer Centers, which has locations in Johnstown, Altoona, Indiana and Latrobe.

“We are trying to be innovative for our patients right here in Johnstown,” he said.

There are three groups of receptors that are targets for cancer drugs.

If the cancer has any of those receptors, doctors have developed keys to open them for targeted treatments.

Two of the new treatments – alpelisib and ribociclib – are improving the odds for patients with metastatic cancer that has receptors for the hormones, but not for HER2.

The third – atezolizumab – has been shown to help those with triple-negative breast cancer, which has been difficult to unlock because it is negative for all three receptors.

Hormone therapy has been the standard of care for patients with metastatic hormone-receptor positive, HER2 negative cancer. However, after initial improvement with the hormone medicine, the cancer has usually advanced.

Prior to the Food and Drug Administration’s approval of atezolizumab in March, chemotherapy was still the main option for triple-negative breast cancer, Sbeitan said.

The drug, sold under the brand name Tecentriq, is the first immunotherapy drug approved for triple-negative cancer.

“Immunotherapy is starting to break into triple negative,” Sbeitan said.

Although he acknowledges that the treatment hasn’t been around long enough to show long-term survival, Sbeitan says it has slowed progression with less side effects.

The UPMC Hillman patients were part of the MONALEESA clinical trials funded by Novartis Pharmaceuticals Corp. of Switzerland for its Kisqali brand of ribociclib.

“Cancer cells use the protein to grow,” he said. “It’s like fuel for them. This blocks the fuel and there is very good response.”

The drug is also significant because the study focused on younger, premenopausal breast cancer patients, Physician’s Weekly said, citing Dr. Sara Hurvitz of the University of Southern California Los Angeles Janssen Comprehensive Cancer Center. For women under 45, breast cancer is a leading cause of cancer deaths.

“This is the first study to demonstrate improved survival for a targeted therapy,” Hurvitz said at an American Society of Clinical Oncology press conference covered by Physician’s Weekly.

The third new treatment uses a different approach to target a sub-group of advanced-stage hormone-positive, HER2 negative patients.

Alpelisib, sold as Piqray, targets cancer with a mutation known as PIK3CA that has grown despite hormonal treatment.

The drug is used for postmenopausal women and men with breast cancer.

“Normal cells became cancer because a mutation took place,” Sbeitan said. “We try to find the mutation and reset the mutation.”

Sbeitan’s colleague, medical oncologist Sheetal Higbee, says alpelisib is one of the second-line cancer drugs that is used for patients who don’t respond to the standard treatments. The second- and third-line drugs help patients live longer while more treatments are developed.

“Their life with cancer is a lot more bearable,” she said at the Conemaugh Cancer Center. “We have been giving them hope because we have so many options.”

Progress may seem slow, Sbeitan admits, but the results have begun to show.

“Cancer treatment is a block by block treatment,” Sbeitan said.

“You have to have the attitude that each treatment is going to add to the last.”

One of Conemaugh’s patients has been receiving treatments for metabolic cancer since 2006.

“She is fully functioning,” Sbeitan said.

Although treatments for some cancer is “curative up front,” Sbeitan says most require ongoing treatments. And there may be setbacks, he adds.

For those patients, the goal is to allow them to enjoy a longer quality of life while keeping the cancer at bay.

Awan compares it to chronic conditions such as diabetes and heart disease. All can be controlled with medication and lifestyle changes.

“They can live with the disease and have a normal life,” he said.

It is getting more challenging to develop new treatments because of existing cancer care, successes, medical oncologist Dr. Michael Voloshin said at UPMC Hillman in Johnstown.

Researchers don’t want to be depriving cancer patients of the proven standard of care in order to test experimental treatments.

“We have a lot well mapped out on how to treat cancer,” Voloshin said.

National Breast Cancer Awareness month has officially begun today, but I’ve been in the pink for over a month.