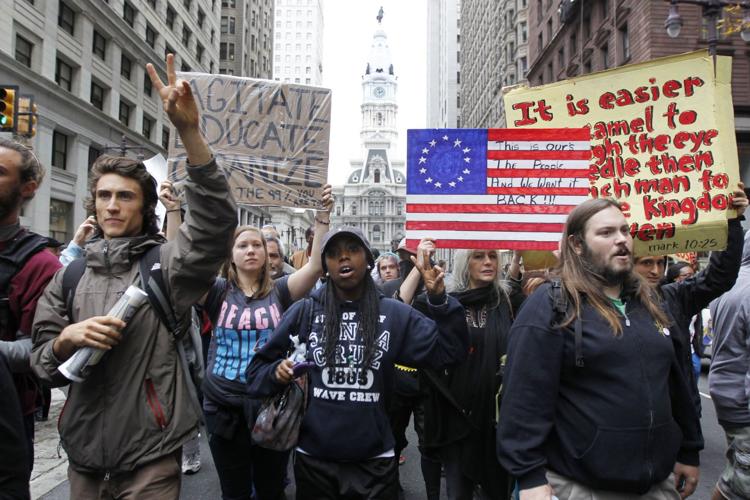 Protesters march from a City Hall, center, encampment to a Wells Fargo bank Wednesday, Oct. 12, 2011, in Philadelphia. The demonstration at City Hall is one of many being held across the country recently in support of the ongoing Occupy Wall Street demonstration in New York. (AP Photo/Matt Rourke) 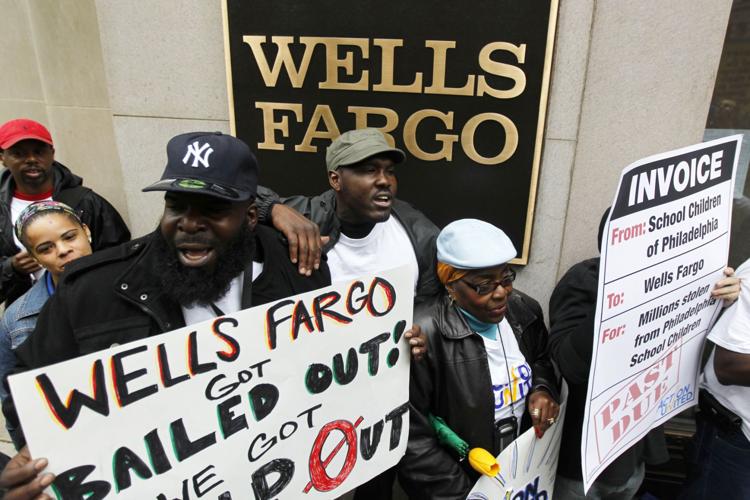 People who marched from a City Hall encampment protest outside a Wells Fargo bank Wednesday, Oct. 12, 2011, in Philadelphia. The demonstration at City Hall is one of many being held across the country recently in support of the ongoing Occupy Wall Street demonstration in New York. (AP Photo/Matt Rourke) 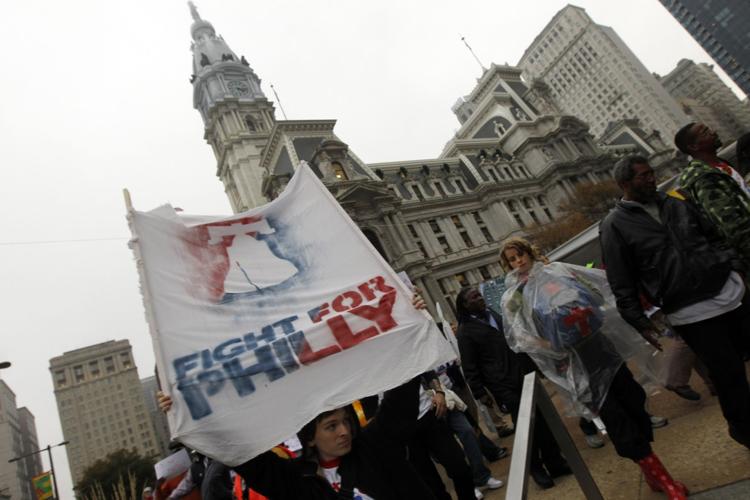 Protesters march from a City Hall, center, encampment to a Wells Fargo bank Wednesday, Oct. 12, 2011, in Philadelphia. The demonstration at City Hall is one of many being held across the country recently in support of the ongoing Occupy Wall Street demonstration in New York. (AP Photo/Matt Rourke)

People who marched from a City Hall encampment protest outside a Wells Fargo bank Wednesday, Oct. 12, 2011, in Philadelphia. The demonstration at City Hall is one of many being held across the country recently in support of the ongoing Occupy Wall Street demonstration in New York. (AP Photo/Matt Rourke)

The Occupy Philadelphia protests are set to enter the second week of their encampment at City Hall as new Wall Street-style protests are now being planned across Pennsylvania this weekend.

The Philadelphia group marked its first full week at the City Hall plaza Thursday, with police and organizers reporting no arrests so far related to the protest. Protesters are vowing to remain camped out in tents around City Hall and voicing a disparate array of concerns including sympathy with the Wall Street protests in New York, as well as opposition to corporate influence on government and the war, among other issues.

Similar rallies are being planned in Pittsburgh and Harrisburg this weekend.

Near the Philadelphia protest area but in an apparently unrelated incident, a 26-year-old homeless man was arrested for breaking windows of five storefronts with a brick around 5 a.m. Thursday. Police spokesman Lt. Ray Evers said the man, who has mental health issues, is known to police and has been arrested before for vandalism. Steve Ross, a spokesman for Occupy Philadelphia, said protesters were not involved in the vandalism and that the group condemned the acts.

Later, there was a march to a building where Wells Fargo Bank has offices and then to the offices of Sen. Pat Toomey, R-Pa., where a separate group of about nine people held up signs supporting capitalism. Police on bicycles kept the groups separated during the peaceful demonstration.

Philadelphia Managing Director Richard Negrin sent the protesters a list of public safety concerns he says must be addressed. Graffiti and public urination must stop, Negrin said, and structures made of pallets must be moved away from the wall of City Hall. Dozens of police are on patrol in the area.

Protesters will have to be out of the plaza they are occupying by the start of a long-planned construction project sometime next month, said Mark McDonald, a spokesman for Mayor Michael Nutter.

For now, the protesters continue to maintain their encampment and express an array of messages, one of them in unison with the Occupy Wall Street protests in New York. The group opposes the influence of corporate greed on politics, but protesters have also addressed issues such as public education, war and the environment.

Dan Harvester, 22, a recent college graduate from northeast Philadelphia who works at a cafe, said he feels the group is still working on its message.

"There are so many different messages here," he said. "We're still trying to distill the common threads of what everyone's saying here."

Another protester said he thought many in the group were very idealistic, but that sometimes the message was unfocused.

"I don't see it as a clear message coming across to Middle America," said Darnel Tanksley, 55, a telephone technician from Philadelphia who had spent several days at the protest and noted that many of the younger protesters talk about being anti-capitalist or anti-government. "I see no theme here."

In Pittsburgh, police have approved a permit for an Occupy Pittsburgh march and rallies on Saturday, but the city hasn't said what it will do if some protesters try to camp on some private, grassy property near the BNY Mellon headquarters downtown.

In Harrisburg, protesters plan a daylong event Saturday on the steps of the Pennsylvania Capitol, said Jefferson Pepper, a spokesman for Occupy Harrisburg. The decision-making process during the initial meetings of the group, Pepper said, has been "a vote-consensus sort of thing."

"People could get up and speak for a couple minutes, and if people in the room agree with the points they're making, they raise both hands," he said. "If they disagree, they cross their arms."

Pepper said the "official doctrine is complete nonviolence" and problems with police were not expected.

Troy Thompson, a spokesman for the Capitol Police, said the department has been working with the group on issues that include the hours of the protest. Occupy Harrisburg has been billed as a 24-hour event, from midnight Friday to midnight Saturday, but Thompson said organizers have been informed the Capitol grounds are not open between 8 p.m. and 6 a.m.

"We provided them with that information, and to the best of my knowledge there's been no pushback," Thompson said, adding that police would ensure protesters did not block access to the building.

Associated Press writers Mark Scolforo in Harrisburg, Joe Mandak in Pittsburgh and JoAnn Loviglio and Alex Brandon in Philadelphia contributed to this story.